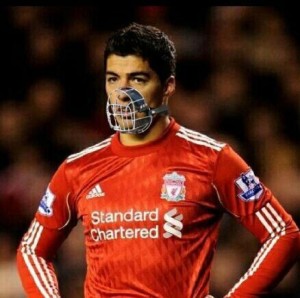 Biting someone once, shame on you.

Biting someone twice, you may have a problem.

Biting someone a third time, someone get this mofo a mask or a helmet or something.

After witnessing the injustice that was the Italy vs. Uruguay match, my blood has been on a rolling boil over Luis Suarez and his seemingly uncontrollable biting reflex. Aside from the referee’s obvious bias towards Uruguay, insult to injury was added when he completely disregarded the fact that Suarez had clearly sunken his teeth into Giorgio Chiellini.

Now, I understand that all football players have a flair for the dramatic, especially when they are in desperate need of a free kick, but no sound-minded referee would have let last night’s events go unpunished, especially after seeing the bite marks on the Italian defender’s shoulder. 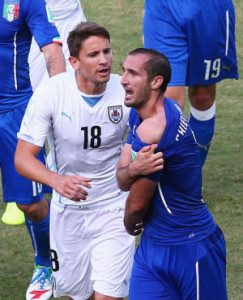 Marco Rodriguez, last night’s referee, didn’t acknowledge the bite nor did he punish Suarez for his cannibalistic tendencies. This isn’t surprising as Suarez has not received more than a 10 game suspension for biting players, and last night he did not even receive a slap on the wrist.

I am not exactly sure why FIFA or the Premiere League (where Suarez plays at Liverpool) have not reprimanded him in a manner consistent with his offenses, a more severe punishment than a 10-game ban might teach him not to try to eat other players.

On the other hand, Suarez seems like a bit of an asshole, and punishment may do nothing to change his ways. In that case, he should be banned from the sport. Professional footballers are always at risk of serious injuries, being bitten shouldn’t be amongst their concerns. 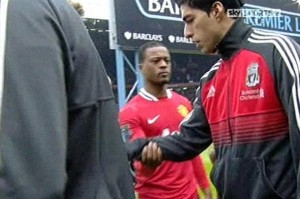 Luis Suarez hasn’t exactly been a football darling since stepping onto the international scene. He is guilty of instigating fights in the locker room, flipping off fans of opposing teams and even bigotry.

As if he couldn’t be any more offensive of a character, Suarez, in 2011, repeatedly taunted Manchester United’s Patrice Evra, calling him the Uruguayan version of the n-word (amongst other things). His defense? “It is not a big deal in Uruguay,” he replied. Upon playing Man Utd again the following year, Suarez refused to shake Evra’s hand before kick-off.