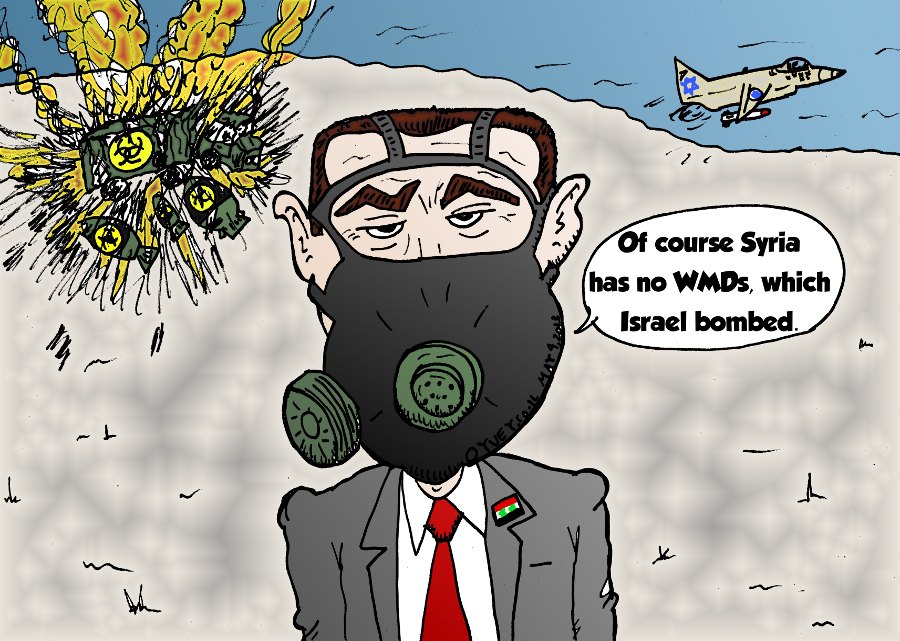 One of the unforeseen consequences of the much bragged about Russia and U.S. backed deal on Syrian Weapons of Mass Destruction has been casting light on one key stakeholder, which nonetheless was trying to remain on the sidelines as of lately: Israel.

Indeed, the Assad regime’s immediate reaction after agreeing to give up its weapons (and therefore aknowledging their existence) was to point its finger at this eternally usual suspect when it comes to WMD in the region. This suspicion was only bolstered by a recently declassified 1983 C.I.A. paper that suggests the Hebrew state has been amassing chemical and biological arms for decades.

Israel, however, has always acted with ambiguity, never acknowledging its possession of nuclear weapons, even though many of its authorities have unilaterally claimed the right to assemble and stock them in order to defend themselves (without having to call for outside intervention) from all their dangerous neighbors who have been threatening their stability since the first war that broke out in 1948.

Prime Minister Benjamin Netanyahu repeated the same rhetoric recently on the occasion of a ceremony commemorating the 40th anniversary of the Yom Kippur War, when Egypt and Syria attacked Israel by surprise. 1973 was precisely the only time Israel reportedly considered the nuclear option seriously and even readied its arsenal.

One might have expected this to happen: Once a naughty student is caught, the finger-pointing starts. Syria has managed to buy time to let this war drag (with hundreds still dying every week) while distracting the international community’s attention by pointing the finger to the other side of the border.

In a recent interview with a Russian television network (one of his favorite means of communication), Bashar Al-Assad said that all countries in the region “should accept international agreements” (referring especially to the 1992 Chemical Weapons Convention). “Israel is the first country that should do it, because it has nuclear, chemical and biological weapons,” he said.

Days later, Syrian ambassador to the UN Bashar Al-Ja’afari was more clear by stressing that “Syria’s chemical weapons are a deterrent against Israel’s nuclear arsenal”. Russian President Vladimir Putin stated in turn that Syria’s program was only necessary as a defense against Israel’s vastly superior firepower.

When more than one country dared to mention Israel, the U.S. started to fear that progressively disarming Israel could turn into a precondition for Damascus to destroy its chemical agents. Sighs of relief were heaved when Al-Ja’afari specifically said that Syria wasn’t making such actions by Israel a prerequisite. However, he insisted on the fact that the world must also focus on the Israeli arsenals. And that could be a good thing, as Israel being put under scrutiny and pressure might be the only way to decrease the amount of unacceptable weapons in the Middle East.

In fact, in spite of its armament being a well known secret, the Israeli Administration has never (probably because it has never been forced to, for that matter) signed the 1968 Treaty on the Non-Proliferation of Nuclear Weapons. Only last December the U.N. General Assembly voted on a resolution, with a massive majority, calling Israel to join the Non-Proliferation Treaty and to place its nuclear program under International Atomic Energy Agency supervision.

Israel nonetheless did sign the Chemical Weapons Convention, although it never ratified it. Israeli officials insist that their government is willing to ratify the treaty, but only after others in the region follow suit. Not only Syria, but also Egypt has refused to sign the accord outlawing the use of chemical weapons.

But the reason behind Israel’s refusal seems far more simple: If implemented, the text would allow chemical weapons inspectors to enter the country and inspect the country’s facilities, and that would include the nuclear ones. Even though previous estimates had put the number of warheads in Israel’s possession at up to 400, in addition to its alleged stockpiles of biological and toxic agents, an article by the Times of Israel, citing reports by the US Defence Intelligence Agency and the Stockholm International Peace Research Institute, disclosed that “Israel possesses a stockpile of 80 nuclear warheads”. Apparently, Israel “began to produce nuclear warheads in 1967 and gradually built up its arsenal, producing between two and three warheads each year until it amassed 80 warheads in 2004” and is also “estimated to have produced enough fissile material for 115 to 190 warheads”.

US Secretary of State John Kerry claimed that the Syrian government owns the largest chemical weapons stockpiles in the Middle East. Some believe this statement to be way too inaccurate. As a matter of fact, Syria and Israel are not the only countries that have been suspected to own this kind of arms. Libya was another example, before former dictator Qaddafi accepted to destroy its stockpiles of chemical weapons in 2004.

Iraq and its renowned dictator Saddam Hussein is another blatant example, particularly in what concerns the massive use of chemical weapons against Iran and Kurdish towns in the eighties, seemingly with the complete approval and sponsorship of the United States.

Moreover, the U.S. has held to a decades-long policy of neither publicly acknowledging nor denying Israel’s capabilities. It is not the first time, though, that the U.S., a country that also possess nuclear weapons, has been accused of following dual policies in holding different governments accountable for their possession of WMD.

Israel’s motives to build up and amass these weapons seems logical up to a certain extent: Once we have been attacked not once but even twice and continue to be threatened, and the Arab states have started to produce chemical weapons, it is only natural that we try something similar – “our very survival rests on unconventional weapons”.

That would go hand in hand with the Israeli WMD doctrine: not admitting the existence of WMD before peace prevails and not committing publicly to any red line in the realm of unconventional weapons, whilst accusing our neighbours at the first opportunity, thus further justifying our victim role. And so on and so forth.

And little by little, the lines of a vicious circle become clear. And only one truth stands up as crystal: Unless all nations are held to the same standard, the global problem of WMD will remain one of the most serious issues the international community ought to tackle.

Interestingly, a WMDs-free Middle East once was Mubarak’s dream, or at least one of his main proposals concerning the region. Nearly 20 years ago, the U.N. adopted a Resolution calling for a Middle East Nuclear Free Zone. The Arab League backed the initiative and has held several summits (the last one taking place in 2012 in Sharm El-Sheikh).

Does that mean that, in spite of all the Arab Spring fuss, something has to change so that nothing actually changes?