Off The Post: The Living Legend – Mohamed Abou Treika 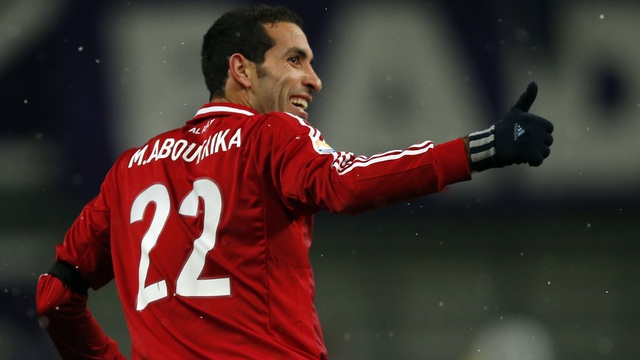 As we close down 2012, there is nothing much to highlight across the Egyptian football scene, as it was almost non-existent with the League being called off for security reasons. Nevertheless, somehow miraculously, Al Ahly were able to pull a BIG FAT rabbit out of the hat and crown themselves as African champions for a record 7th time with a historical 3-2 win over Tunisian giants Esperance ST in the Champions League final. Although the team did not play any competitive match out of this tournament, the players managed to stick around Hosam El Badry keeping their fitness levels to a maximum and featuring yet again in the Fifa Club World Cup. If we focus a bit more on the triumph, I wouldn’t  take anything away from the coach & players, but fact remains that this would not have been possible without the all time veteran; Abou Treika.

2012 wasn’t very kind to Mohamed, as it witnessed the massacre of 74 Ahly supporters in the cursed stadium of Port Said, with a young kids’ soul slipping away in the arms of Abou Treika. The influence was great as he decided to make his political opinions against the ‘Ministry of Interior’ public (highly alleged for conspiring the murder of the 74 Ahly Ultra’s, who constantly opposed its disgraceful violent policies). This backfired when the club decided to go against the will of the Ahly Ultra’s (the biggest football fan base in Egypt) and play a part in the Egyptian Super Cup match against Enppi. Abo Treika’s stance to not take a part in the match idolized him yet again as a hero in the heart of every Egyptian, as he sacrificed his team’s captaincy & received a ban + fine by the club management.

Although the bench is known to be a tomb for aging footballers, it added more wood to the fire feeding Mohamed’s hunger for more. On the 14th of May, Ahly was facing  Stade Malien in the Second round of the African Champions league, coming into the game with a 1-0 away loss in Mali and trailing in half-time by 1 goal in Cairo. Yet the ‘Wizard’ came off the bench to score the most precious hatrick of his career, taking his team mates unbelievably through to the Group stage on a 3-2 aggregate & later on to win the trophy!

The Egyptian legend, as usual, never failed to impress on the international level during 2012. He successfully led the National Olympic team through a great run in the London Olympics, scoring twice in the process. But the highlight was definitely the Club World Cup Championship, when once again he came off the bench in the team opener against Hiroshima of Japan to score a superb winner. Although Ahly failed to improve on their 3rd place best in the competition, they lost to Corinthians (who later won the Cup) with heads held high as all the spot light was shed on Abo Treika’s immense passing, magical movement & supreme ball control as once again he leaves all reporters chasing him while he humbly runs down the tunnel following the final whistle.

Mohamed exits a year that is regarded by most of Egypt’s footballers as stagnant with several honors; African Champions League winner & Fifa Club World Cup 4th place with Ahly and the World Cup’s all time top Goal Scorer with 4 goals tied with Leonel Messi (Barcelona) & Denilson (Red Bull Brasilians). To round it all off, for the second time after 2008, he has been crowned as the 2012 African Based Player of the Year.

Although losing the major African award to Adebayor in 2008, he was hailed by all pundits as the true winner & was crowned with the BBC African Player of the year for a second time following 2006. Abou Treika may have never won the African Player of the year award, as unlike all his competition who play in the most prestigious leagues in Europe, Mohamed remains where his heart belongs, in his mother land Egypt.

FYI, as all of you know me as a Zamalek Fanatic…yet I remain a slave to the Wizard’s magic.