We Sat Down with Injy El Mokadem, and got all the recipes from “Sophia” and her delicious pastries!

This year Ramadan was about two things, the World Cup 2018, with all the football players bombarding us in every ad, and of course our beloved TV series “Layali Eugenie”, and specifically the Donna Italiana and patisserie owner, AKA Sophia, starred by Egypt’s current sensation, Injy El Mokadem. 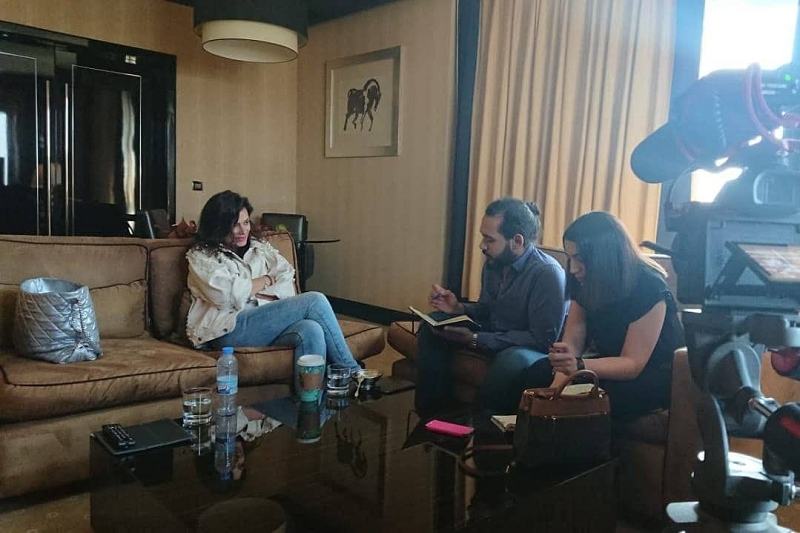 Scoop decided to meet Sophia in person and know all about the Italian pastries and flavors.

Did you expect all the buzz that has followed your role in “Layaly Eugenie”?

Honestly, I did not expect it at all. I thought it would grab some attention, as Sophia is Italian and the role is new, but I did not imagine that it would be like this.

When did you start noticing that Sophia is everyone’s favorite?

Well, it was instantly from the very first episode, in her first appearance, when she was speaking Italian fluently then turned around and replied in Arabic as a native Egyptian. This mixture was admired by people and the affection for Sophia’s character continued to build up as the character got revealed more.

Did you have to learn Italian or just memorized the Italian phrases in the script?

Well, I memorized the Italian lines by heart and not the language, but I spent 2 months in learning everything about my lines, from proper pronunciation to the sound and phonetics, thanks to my Italian instructor, who is originally a lawyer. I used to spend 3 to 4 days in a week practicing with him and I even acted the scenes in front of him to be ready in front of the camera.

Which “Layaly Eugenie” Character is the closest to Injy in Real Life?

What really inspired Ingy to pursue acting as a career?

I have already minored in theatre and majored in psychology and I used to act in plays back in college days all the time. I knew I loved acting so much and I enjoyed everything about movies, and I’ve always wanted to take this decision, but I couldn’t and it took me a long time to take it, till my appearance in 2007 in “Ahmed Etgawez Mona” Sitcom.

Which of your previous works could be described as your “Breakthrough”?

Well, for my 10 years of acting, I have been gaining a gradual success more than a sudden boom, until my role in Sophia, which is a real sudden breakthrough.

7- Among all roles you played, which role was Injy’s Favorite to play?

It’s definitely Deja, from Hekayat Banat, and now I can add Sophia, actually, Sophia is my favorite for the current time.

If you were to star in a Netflix Original, which show would it be and why?

I’d go for Big Little Lies, and I’d love to play “Madeline Martha”, which is starred by Reese Witherspoon as it has several conflicts and layers. It’s very intriguing.

What about a movie?

Did you take part in styling Sophia?

Well, All credits go to Yasmine El Kady, who is beyond talented, hard worker and excelled in dressing Sophia and all characters. We spent a lot of time in the beginning because we were so hesitant at first, not knowing which style perfectly fit Sophia would. El Kady kept sending me references and designs, Hanyel Khalifa’s instructions of course. Till we came up with this practical and European style.

Definitely Romantic Comedy, I just enjoy it so much.

What is your dream collaboration, both nationally and internationally?

It would be with Eyad Nassar, his approach to any character he plays is immensely impressive. And if I’d go international, it must be Johnny Depp.

What is your all-time favorite role to play? Why?

It’s Shagaret El Dor, because this woman was very strong, complicated and Egyptians are not really aware of many sides in her story.

What are your chosen destinations for Traveling (Solo-Girl Gang-Significant Others)?

Solo: Amsterdam as I’ve never been there before.

What is your dream achievement?

It has to be the Oscars.

Which Era would you love to live in?

The Pharaonic Era, I am very infatuated with everything related to Ancient Egypt. I just want to know how they used to talk, walk and all about their life.

Which fashion designer would you choose to wear for a whole month?

This is a very hard question because I don’t have a consistent style. Somedays I feel I want to dress up and wear heels, other days I just enjoy wearing sneakers with jeans.

Which of the Ramadan shows have you been following?

I didn’t have any time to watch Ramadan shows yet, but I have seen parts of “Tayea” and “Abu Omar El Masry” and I will definitely try to follow them.

Which is your favorite cinema to watch, besides Hollywood?

The Spanish Cinema in general.

Who is your favorite Disney Princess of all time?

It’s Belle from the Beauty and the Beast.

If you were to live in a fantasy movie, which movie would you choose?

Alice in Wonderland, I want to see all the fun and illusion taking place in her wonderland.

WE SAID THIS: Sophia was exactly as sweet as her pastries place!