Violence Against Street Children in Egypt

There’s this one 13-year-old girl on Road 9 in Maadi called Amina. She sells tissues for people on the street. Like most people, I was annoyed by her constant nagging for money and often brushed her off and walked away. Then one day, I witnessed something horrific and disgusting – Amina was being kicked profusely because she asked a boy in his late teens for change.

I did what any human being with a sense of decency would do, I yelled at the douche bag and helped her up. I thought that that would be the end of it but I was wrong, this 13-year-old battered human being was so scared to be alone, she wouldn’t let me leave.

The government’s lack of ability to resolve this issue is a huge problem. Although the Arab Charter for Human Rights has embraced major children’s rights treaties and ideas derived from the Universal Declaration of Human Rights, Egypt has failed to implement these ideas as law. 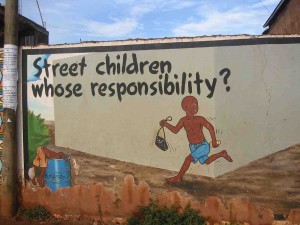 In Egypt, there are no systems responsible for recording or investigating cases of violence against homeless children. There are no accurate statistics simply because many homeless children don’t have a birth certificate and are difficult to document because they tend to move around in order to survive.

The Egyptian government claims that there are only 13,000 children who are homeless, but UNICEF has stated that this is a highly inaccurate number and estimates the number to be at least twice as much, while other estimates have reached the millions.

Public apathy is one of the main reasons why violence against homeless children goes unnoticed. This is where we, as a society, fall short – in the common belief that these children are just a waste of space.

Their voices are unheard, they are unseen and they are unprotected and abused all day, every day. The most common violence these children face is sexual violence. A study conducted by Lipincott Williams & Wilkins Inc. rounded up 857 homeless children in Cairo and found that 93% were sexually assaulted or raped (mostly by police officers and other homeless children) – 90% of whom were females.

Girls in particular, regardless of their age, have a better chance of surviving on the street if they mask their gender or don’t shower for weeks at a time to repel boys and men from sexually assaulting them. Yet for street girls, many of whom come from dysfunctional and abusive family backgrounds, rape is an inevitability.

Nelly Ali, an anthropologist and child rights activist, blogs about her experiences volunteering as a project manager at the Hope Village Society, a nonprofit organization that has been sheltering and caring for homeless children for the past 35 years.

Her tales are not for the faint hearted and paint a grim, brutal reality for Egypt’s street children, yet she manages to spotlight a silver lining of hope. Check out her #TakeTheFloor video for last year’s International Women’s Day, where she shares inspiring stories about some of the girls she’s helped:

WE SAID THIS: Don’t miss this powerful piece on Victim Blaming in Egypt.