Sexual Assault at Cairo University and Victim Blaming in Egypt

This week, in what has sadly become a common occurrence in the Egyptian public sphere, a female student was sexually assaulted by a mob. This time, however, was different. It was not during a mass rally, in a crowded bus during rush hour, or coming home late at night unescorted – all situations that, when sexual harassment occurs, have bizarrely become cloaked in thinly-veiled public acceptance – this time was different. This time, it happened on campus.

A female student at Cairo University, one of the largest and oldest universities in our nation, was surrounded by a group of her colleagues from the Faculty of Law. The mob of male students then began to verbally and physically assault her, even going so far as to try to strip her clothes off.

But fear not, everyone! Gaber Nassar, President of Cairo University, has assured us that justice will prevail! Nasser, in what is perhaps one of the most despicable interviews I have ever seen, spoke to ONTV on Monday and declared that both the girl (i.e. the victim of sexual assault) and her male colleagues (i.e. the sexual offenders) will be equally punished and potentially expelled.

Nassar went on to explain his special brand of justice. The girl was purportedly wearing a long garment over her clothes when she entered the university. However, being the uncontrollable heathen she is, she shed her long garment once on campus to reveal a titillating and provocative outfit – black trousers and a pink sweater. Needless to say, this led to the “inevitable”. However, the gracious Nassar has decided that despite her obvious mistake, it does not justify the male students’ behavior. But it may justify expulsion.

I am so sick of this. The culture of victim blaming in this country (and most others around the world) has gone too far. You can walk down the streets in a tank top or a burqa and you will still be harassed (hell, I once heard a guy on a motorcycle harass a woman in a 7’imar (“ya 7’imarik ya 7’imar”). 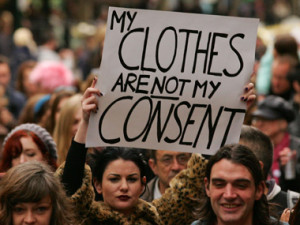 How I choose to dress, what I choose to say, where I choose to walk, and when I choose to go home, is my choice and mine alone. Sexually assaulting another human being, stripping them of any sense of physical and emotional security, is your action and yours alone. I did not bring this upon myself. It is in no way a reflection of who I am and it sure as hell does not define me.

But the only thing I am more sick of than the culture of victim blaming is some of the language used when supporting sexual assault victims that will inevitably ensue. I’ve been guilty of it – and so have you. In any piece about sexual assault, in any heated discussion denouncing this vile act, one line of reasoning is bound to come up: “She could’ve been your daughter/sister/wife/friend/colleague/etc.”. Well you know what, screw that.

I am not your sister. I am not your mother, your wife, your colleague or your friend. I am a woman who has been harassed. And that damn well better be enough. Your outrage, your support, your encouragement, you denouncement, is not contingent upon who I am to someone else. It is not relative to the role I play in society, or who I am to you.

This happened to me. And why shouldn’t that be good enough? Why do I have to be someone’s [insert familial tie here] in order to warrant a response? Why can’t we feel for another human being’s suffering?

If ever there was a time to strip this patriarchal and egotistical lens from the sexual assault debate it is now. This young woman was sexually assaulted in the place where she should feel safest – going to university to earn a degree of law.

Her daily list of concerns – which include endless hours commuting in an inefficient public transportation system, to take part in a failing public education system, face the economic burden of private lessons only to graduate and most probably join the ranks of the millions of unemployed youth – should not include mob sexual assault. And that is it. Point blank.

WE SAID THIS: The author kindly requests that you appreciate her resistance to use profanity in between every other word in this post. That required a lot of self-restraint and surely must be acknowledged.