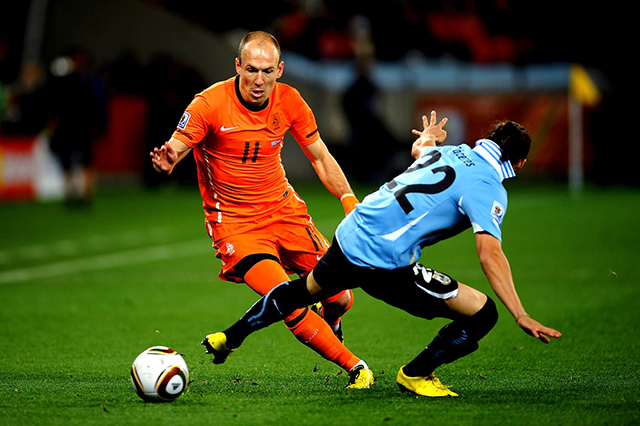 It’s no secret that Dutch winger Arjen Robben has got enviable speed. Fresh off the Netherlands’ stunning 5-1 victory against Spain (what a shame), expectations are running high for the mid-fielder ahead of tomorrow’s match against Australia – a must win for the Aussies and a victory Holland is seeking to help secure their spot in the Knockout stage.

In this Q&A for Adidas, Robben reflects on a potential face-off against Germany in Brazil, what he does to let off steam and more.

Can the Netherlands’ last gasp defeat in the 2010 World Cup final spur you on to success this summer?

I am proud that we reached the World Cup final in 2010, but even though I have had great success with Bayern since, it still hurts that we lost in Johannesburg. It was a very close game and we could have snatched it but Iker Casillas made a world class save from my shot. They were a smooth but deadly team who always looked for the right pass, so there was no disgrace losing. But to get so close and miss out was a shame. It was Holland’s third final and third defeat. I feel my job is to make certain we have chance to reach a fourth final, and win it.

Whether you like it or not, your compatriots will consider you the ‘inside man’ if the Netherlands play Germany. What info can you help the coach with?

There are no secrets in international football and I wouldn’t call myself a spy, but I do think it’s useful that I know so many of the Germany squad. I play with them in training every day with Bayern, so hopefully know what their strengths and weaknesses are. Of course that goes both ways. Manuel Neuer is a fantastic goalkeeper, you don’t get past him easily. And I feel the benefit of Toni Kroos and Bastian Schweinsteiger too, their midfield dominance allows me to attack so regularly. 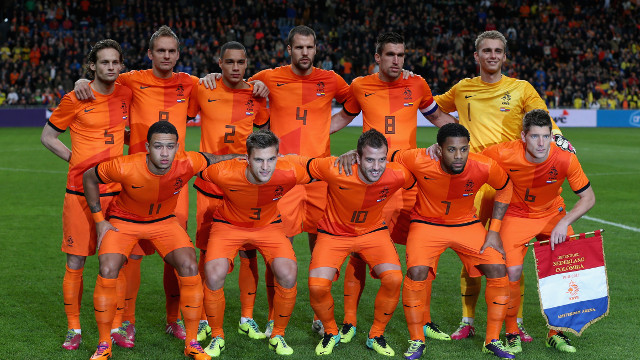 Would you like to go toe-to-toe with Philip Lahm?

I know Philip can play on either flank at full-back so there is a chance I could be up against him if our nations meet. It’s hard to say how the meeting would go. If I feel good and fit I think I can cause any player problems, but Philip is one of the best defenders in the world and has been for years.

You have a Spanish coach and teammates at Bayern. Can your familiarity with Javi Martinez help you at the World Cup?

I have got to know Javi Martinez very well and am glad he is on my team when we play club football. His is energetic and tenacious and such a presence in the centre of the pitch or at centre-back. I also met Xavi, Jordi Alba and Cristian Tello in the Champions League when Bayern met Barcelona in 2013, on our way to winning it. They are all excellent players who hurt you in different way. Xavi in particular is an example and reference point to all midfielders. His distribution, protection of the ball and temperament are as good as it gets.

Frank Lampard may be appearing in his final World Cup. What are your views on him?

I really enjoyed playing with Frank Lampard when we were together at Chelsea. He was tough and cunning in central midfield, but also made his presence felt going forward. Now he has matured into a very shrewd operator, and times his forward runs carefully. Of course I was devastated to lose the 2012 Champions League final, but at least the team that beat us, Chelsea, contained a great champion like Frank. Much as I was distraught, I was happy for him.

A Trip through consciousness: How music highlights our fondest…

What do you like about your adidas boots, and what do you require from them?

I have been with adidas many years because they produce the boots which suit me perfectly. They need to be comfortable and feel good instantly. As a winger who sometimes attracts aggressive treatment from defenders, my footwear has to be strong and durable. But they must be light too because my game is speed. The boots adidas make for me feel great, are sturdy but are also light enough for me to hit top speed.

Your Netherlands team knocked Brazil out of the 2010 World Cup. Is that a lucky omen?

I hope the locals have conveniently forgotten the 2010 World Cup quarter-final! I hope they are philosophical about it and say “these things happen”. Naturally I don’t expect that. The people of Brazil are crazy about the Selecao and it was a huge blow for the nation when we knocked them out four years ago. The team has changed a lot since then, many of the guys we beat have gone. There are a lot of quality new players like Oscar, plus those who have been around for a while but still have a big influence, like Fred and Dani Alves.

You’ve played in many different countries. How has that helped you in your career?

I have learned something from every team and league I have played in. In the Netherlands we love tactics but also enjoy positive bold football. That’s how I grew up loving to attack at every opportunity and express myself. When I went to England with Chelsea I discovered the physical side of the game, which helped me toughen up and look after myself. The pressure that comes with playing for Real Madrid in La Liga has helped me cope with big games and intense scrutiny. Being able to get on with the matches and not become intimidated or distracted by outside factors is a good skill. And the German attitude of never giving up and working very professionally has improved me further. I have realised that details and preparation are crucial. The Bundesliga is also physically demanding so you have to be fit and live like an athlete to compete.

Will you use your right foot to surprise us one day?

I think my left foot is good enough, don’t you? When the situation demands it I use my right, but the left has helped me out in so many big games, I can’t abandon it. My right foot certainly isn’t just for standing on, but when there is serious work to be done, the left rarely lets me down. 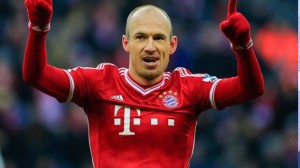 Gerald Vanenburg, the legendary Dutch winger of the 1980s was known as the Brazilian. You are an exciting player like Gerald, do you feel Brazilian?

If people think the way I play is Brazilian I take that as a massive compliment. I love to attack and run at defenders. Speed is also a part of my game. Playing a World Cup in Brazil will certainly inspire all of us, but particularly the forwards. Brazilian players and teams love to entertain and make the fans happy. Just winning is not enough, and I like that attitude. I hope to help my country win in style.

Playing at your level, Champions League, Bundesliga and international tournaments, must be stressful. What do you do to relax?

I love playing tennis. I can’t play as much as I’d like because I don’t want to tire myself or pick up any injuries which would affect my football. But it’s one of my favourite hobbies. If I need to let off steam at the World Cup I might find a tennis court and have a couple of rallies. Who knows, the tennis courts in Brazil are probably very different to the ones I’m used to in Germany and the Netherlands, I could really develop my game, and become a master of all surfaces!

You list sushi as your favourite food on your FC Bayern profile. Are you aware of the Japanese population in Brazil? If you get the chance will you do any culinary exploring?

I have read that there are around two million people of Japanese origin living in Brazil, and their cultural impact is rich and interesting. I would love to try some Brazilian-Japanese cuisine. What we will eat in the Netherlands camp will be strictly monitored and designed to give us as much energy and nutrition as possible, but at some point it would be great to go out and enjoy some of the Brazilian-Japanese fusion dishes. You can’t spend a month or so in a place as varied and fascinating as Brazil without investigating and embracing its charms.

WE SAID THIS: Check out our Q&A with the man himself, MESSI!