Egypt’s social media has been set ablaze, ever since rumors surfaced about exporting stray cats and dogs. Allegedly, the Egyptian government wanted to send the animals to countries that eat them. Last week, Hamed Abdel Daaem confirmed that it had recently licensed the export of 4,100 cats and dogs to a number of countries.

However, amidst the severe social media backlash due to the inhumane nature of the decision, the Agriculture Ministry spokesperson denied rumors, calling them an attempt to tarnish Egypt’s reputation. Until this moment, it is unclear whether the decision was approved earlier or not, yet it seems that it’s not happening anytime soon.

One celebrity and Egyptian icon who took a stand against the decision is our living pharaoh, Mo Salah. The football player took to social media to post a photo with two of his cats and added the caption, “No dogs or cats will be exported anywhere. This cannot and will not happen.”

Cairo Gets Its First Dog Café And It’s Absolutely Adorable 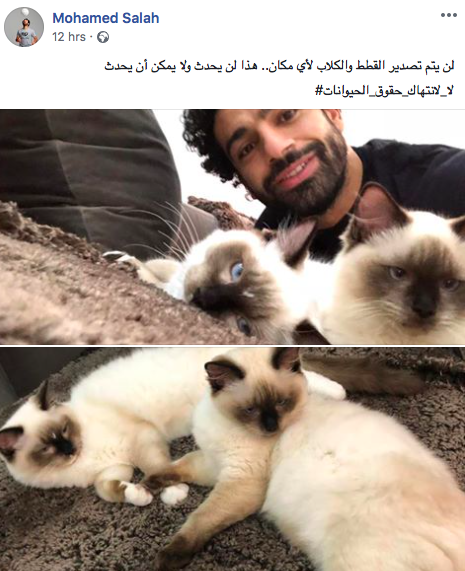 Well, leave it to Mo Salah to say the final word and end this debate once and for all. This is why the whole country loves this man. Always aware of the people, never tone deaf, forever our champion.

WE SAID THIS: Don’t miss These Egyptian Animal Shelters Are Making A Difference … Will You?