RamaScoops: The Battle of the Telecoms 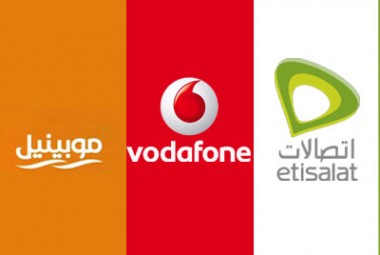 As we all know, Ramadan is the biggest season when it comes to advertising in Egypt, with the highest TV viewership, the most expensive ads and of course, the year’s best creative output.

Last week, we discussed both Pepsi and Coca-Cola’s campaigns, finding it difficult to crown a winner. Up next is a rivalry that is not any less fierce: the competition of the Telecom Operators.

Which one will take the crown? You’ll have to wait and see:

Just to shed some perspective on the matter, the cost of airing a 30 second TV spot in Ramadan is obviously higher than normal months – roughly around 40-50 thousand EGP (yes, every single time you air it). So by the time you want to get yourself a bottle of water or run to the bathroom for a quick pee, you probably missed around half a million pounds of advertising.

That makes the Ramadan budget for any advertiser a significant chunk of their full year spend.

Take a 30-minute segment on MBC Masr, brand it completely, get three rising comedians (ex-Bassem Youssef entourage Khalid Mansour, Ayman Wattar and Shady Alfonse) to present it for you. Cherry on top: You give out 100,000 EGP A DAY to a lucky winner!

Come to think of it, the cost of all these elements together could be end up generating efficiencies for the Telcom giant (3 million pounds for the prizes, say 5-8 million pounds for the 30-minute airtime, plus the production cost and the Trio fees). So we can assume the whole project cost them 15 million pounds to produce, which is still cheaper than what they would have spent on airing a normal copy.

For those who haven’t seen it, the idea of the program is quite simple: They pick five numbers at random and if you, a Vodafone customer, have these numbers in your phone number (in any order) and send Vodafone an SMS, you get in the draw for a chance to win 100,000 EGP… simple!

Being the brilliant script writers they are, along with the creative agency’s team, Khalid, Ayman and Shady always find innovative ways to make the selection of the five numbers quite intriguing, witty and fun. I have only seen bits and pieces of the program but I honestly enjoyed what I saw.

I urge you to watch some and judge for yourself. They’re available here on VF’s Youtube channel.

While the choice of the anchors of the show is quite smart, I’m not sure if they would appeal to the full audience of Vodafone. 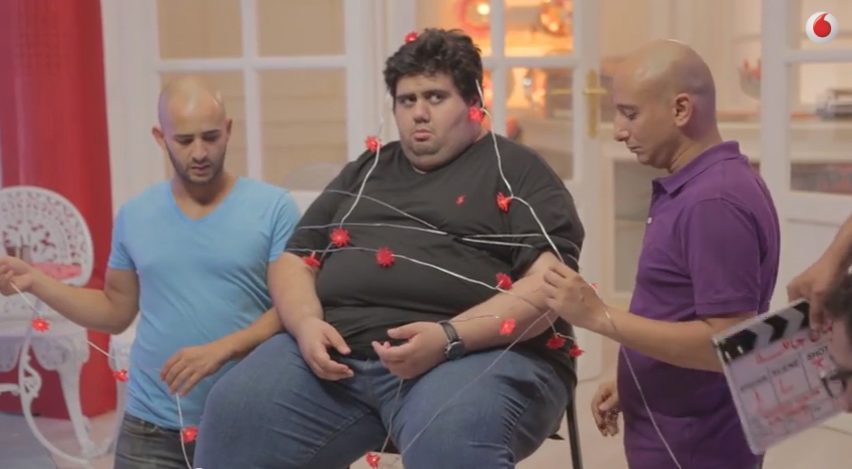 While Khalid, Ayman and Shady are pretty good scriptwriters, actors and comedians, I feel that their  jargon and sarcasm would only appeal to the A/B class segment. I’m not sure if you ask a taxi driver about the opening sequence of the program, he’ll recognize that the trio is actually reenacting Daft Punk’s “Get Lucky”. What he will see is a silly clip of three guys in shiny suits, wigs and a motorbike helmet (nice helmet btw, Shady).

One other flaw is that the whole investment has been made only on one channel, so all the efforts are focused on the MBC Masr audience only. So while all the other advertisers are relying on a push approach, where they push their copies onto the ad breaks of popular Ramadan TV serials and programs, Vodafone here applies a pull approach, where they are relying on word of mouth to pull viewers from competitors to the MBC Masr screen at 10 pm.

This is very risky because nowadays, and especially in Ramadan, people are becoming more content driven rather than channel driven. Gone are the days where you would sit in front of one TV channel and waiting for whatever content it will throw at you.

As far as a non-MBC Masr viewers are concerned, Vodafone is not doing anything this Ramadan.

Great job to all colleagues on this project. Kudos!

This is the kind of campaign that grows on you after a while. Initially I hated it, but bit by bit I started getting dragged into it and now I LOVE it every time I see it.

It plays on the insight that people actually become pretty slow in Ramadan – especially this year with the long fasting hours, the scorching heat and just dealing with other fasting people, discussions actually do become very slow paced and dull!

What I love about this one is the attention to detail in all aspects of the copy, the redundancy in the discussion, the confusion, the cast and the punchlines just make it a pleasure to watch every time.

My favorite part of the three copies are the discussions that happen:

Bring me the copywriter, he deserves a hug and a kiss. Brilliant campaign, want to see it over and over again.

End note: It has become Mobinil’s signature to produce a brilliant idea that will get people to talk, with zero recollection of the message. So people will always remember the guy fighting at the cheese stand at the supermarket, or being confused in the shop, but no one will remember what was the offer Mobinil was advertising in the first place.

This one comes to us from my friends at King Tut Playground (ex Leo Burnett’s Mohammed Hamdalla’s new venture).

The insights there are quite vivid to everyone, yet the KTP team did a great job putting them all together to bring us to the conclusion that we really need to change how we operate as things are indeed moving very fast around us.

Who now doesn’t see a two-year-old using a tablet better than adults and weird kids in weird clothes and haircuts that change every two months? The hashtag symbol has always been there on telephone dial pads and they meant nothing until the launch of Twitter. Skinny jeans (and its 90s version, stretch pants) have always been part of girl’s wardrobes, until a couple of years ago when they crawled into men’s fashion as well.

The world REALLY is moving too fast, as rightfully said in the copy (إللي ماجددش, إختفي – Those who don’t innovate… disappear).

Telecom Egypt come back this year after last year’s disaster copy (Dawwar Gowa Zatak) with a pretty emotional campaign, reminding us that Telecom Egypt has been a key participant in important events throughout Egypt’s history, using real insights and real situations.

They have always been there indeed, from the Suez Canal nationalization through the grey phone with the round keypad that every home in Egypt had, the Internet dial up modem to the day when mobiles were launched in Egypt (with Nokia Banana and Ericsson 788). 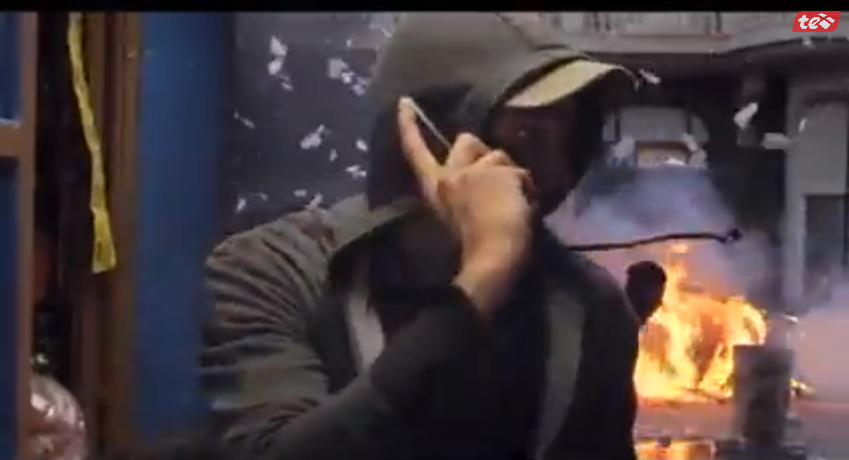 These aside, I really love how they played on the revolution situation, the telecom blackout between Jan 28th-30th when we all went back to basics and started dialing with landlines all over again. There was a great manifestation of it in the ad, where the protestor literally throws his mobile phone away and picks up the landline phone.

One fallout here is the overkill of Amir Eid and his Cairokee crew. I said it once in the Masr El Kheir ad and I’m saying it again, the point about celebrity endorsement is novelty and enjoyment. I don’t think getting them to sing in your ad is new, nor does it add any joy to it, as I’ve already heard them a million times before.

If I were them, I would stop taking ad contracts for a while. If this drags on longer, I think it will actually hurt their career and people will be bored of hearing them as they are already all over the place. Again, don’t get me wrong, I love the Cairokee crew and really admire their talent. Hearing them in one ad is great, but hearing them in 50 ads is exhausting your talent.

One last thing worth mentioning: While Telecom Egypt has indeed been part of the Egyptian culture, they’re fading away. With mobile phones reaching 100%+ on penetration, the decline on landline subscriptions and the high reliance on wireless connectivity in everything. Telecom Egypt should definitely find a way to get back in the game (be it by introducing the 4th Telecom Operator or other solutions).

Hope they learn the lesson and act on it before it’s too late!

WE SAID THIS: Here’s to Telecom Egypt! Although they need to make a comeback technologically, we tip our hats to you on a great ad that takes us through Egypt’s history!