An Open Letter to the Kim K Haters 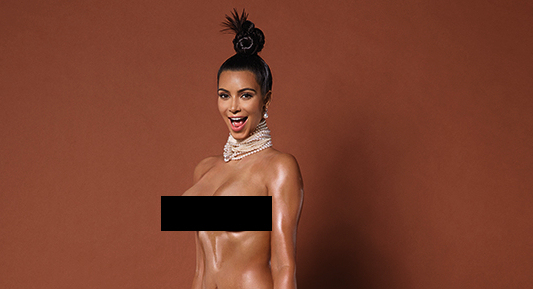 I can’t believe how people are making such a big deal over this Kim Kardashian ass photo. You people are honestly pathetic. You sit there hunched over your phones wondering what filter on Instagram to apply to your 92nd duckface selfie, or tilted shot of your unimpressive lunch, and yet you shout with all your might to play the game of “my morals are more ethical than your morals.”

The woman was already in a sex tape and you’ve been watching her show non-stop for years with excuses like, “I’m just watching for how stupid they are” – even though you love it because you love the idea of one day being famous yourself for doing absolutely jack.

The saddest part is that you people making the biggest fuss over her Photoshopped ass are the same people who seem to live in denial towards the weekly shortcomings of our current government in Egypt.

Oh my, Kim K’s ass will corrupt our youth? Sure… but having a government that is trying to convince people it cured HIV and Hepatitis, whilst bragging over a bomb detector it purchased from a verified fraud, that will surely help the next generation? Jailing journalists who report the news, closing NGO’s, and having fewer liberties than before…these issues are trivial?

All of you laughed when Bassem Youssef called out Morsi on a weekly basis, but when he did the same to Sisi, suddenly you decreed it was rude? Human rights, independent functioning judiciary, and a modern free political system, these are real issues… not some irrelevant chick in a magazine. Everyone needs to get over their own self-importance, especially in Egypt and the Middle East.

Your morals are not my morals, and guess what? THAT’S OK. It really isn’t a problem, I don’t mind at all honestly. Whatever religion you follow or don’t follow, I’m sure you love to tell yourself that people shouldn’t impose anything on you, but you tend to feel you’re allowed to do it the other way around. No….STOP.

Some people drink, some don’t, some listen to dubstep and some to rap. Some people are OK with pre-marital sex and others will wait until marriage. None of these are wrong. The ONLY people who are, are those of you that think you were put on this earth with some moral authority to decide for others what is and what isn’t “correct”.

So please, for the sake of the kids – as you like to say as your go to reason for “modesty” – kabar.

WE SAID THIS: Thoughts? Leave yours in the comments below.