Out on the Open Desert Road in Dubai

The weather in Dubai has just become amazing. It’s officially the drive-around-with-the-windows-down time of year, and after being cooped up indoors in AC for so many months, I’m looking for any excuse to be outdoors. So, when someone reminded me of the Al Qudra outdoor bike track, I decided to seriously book it as a weekend morning workout.

First things first, I needed a recruit to join me on my adventure. After throwing it out to a bunch of girlfriends, one of the bravest of them all enthusiastically signed up. Thank goodness! If I was going to get lost in the desert with just a measly water bottle and my iPod, at least I wouldn’t be alone. Plus she has mad good photography skills that would also come in handy. 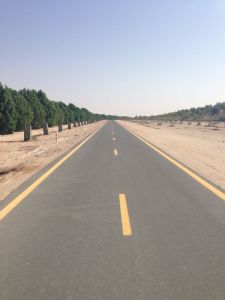 Next was figuring out the logistics. Where would we get bikes from and how would they be transported to the track? And, on that note, where was the track?! I think if you’ve been in Dubai for an extended period of time, you know exactly which bike track I am talking about.

Chances are, while you were lost trying to get somewhere else like Bab Al Shams hotel or Arabian Ranches, you’ve run into it. At least that is how I knew that this track was real. Deciding to go there as a destination, however, was a bit of a different story.

After a tip from a friend who’s friend went before, I contacted Trek Bikes and was informed that Friday mornings were usually packed and there were only a couple of bikes left. Surprised, I quickly booked bikes and received reassurance that the bike shop was just 10 meters from the track itself. Feeling good about our upcoming excursion, I slept that night excited for morning.

Waking up at 7:30am with all traces of excitement gone, I blearily got dressed and went to pick up my friend. As we drove towards the direction of the track, I silently thanked God for Google Maps and that the track had been marked on it. I began to feel more alive with a coffee in hand and relaxed in for the ride.

About 40 minutes later, after some excitement about lack of gas, a lot of driving in the middle of nowhere and a phone call to Trek for further directions, we arrived at our destination. And it was a spectacle! I never would have ever expected that there is such a biking community in Dubai! It was awesome and we began to get a bit more enthused about our expedition.

The guys at the bike shop were super friendly and hooked us up with our bikes and helmets. We bought water bottles and a little pouch for keys and phones and we were off. Since it was our first time, we were advised to take a slightly different course than the main one so we could get a feel for the ride and have a shorter distance to go.

A Trip through consciousness: How music highlights our fondest… 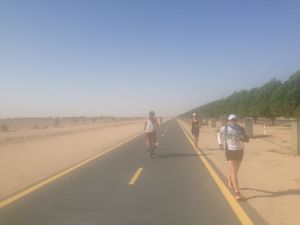 Even the edited version of the distance we went was buzzing with activity. Not only were there groups of bikers, but there were runners as well! One of the best parts of the experience was how friendly everyone was. Rare to find in Dubai, out on the track everyone was extremely comfortable to say hi or to wish each other good morning.

It was a beautiful morning with the sun shining and a lovely breeze, however as the kilometers melted away, the sun felt more and more intense and I realized just how vital our water bottles were. We biked for about an hour, finishing it off with a coffee at the little café located where we started.

Sweaty, exhausted but in a fantastic mood, we marveled at the lovely biking community we had been exposed to and how great it was to start the day with such a pleasant outdoor activity. We vowed now that the weather was better to make it a reoccurring weekend activity!

Warning: post-biking consequences consisted of some soreness of our buttocks (especially if you are not used to biking or spinning) and lower back pain. It’s really really important to make sure that the seat alignment is done properly based on how much experience you have with biking as well. Being hunched over for an hour on a badly aligned bike really took a toll on my back during the following week.

Overall I would absolutely recommend checking out the Al Qudra bike track. It’s a super fun outdoor activity that will really help to start off your weekend right (if you can get up early!) or could be a relaxing way to cap off your weekend before getting back into the grind of daily routine. Just make sure to bring tons of water, sunscreen and fuel up your car; getting stranded in the middle of the desert wouldn’t be much fun!

If you have a bike, this activity is completely free! Otherwise, bike rentals are available from Trek Bike shop for: