In early February, Emad Elsayed, an Egyptian student at the Universal Air Academy in Los Angeles, posted a photo on Facebook of Donald Trump with the caption, “If I killed this guy I wouldn’t mind serving a life sentence and the world would thank me”.

The owner of the flight school, Alex Khatib, tipped off the FBI about Elsayed’s post on Feb. 3. The following day, the student was interviewed by Secret Service agents at the flight school. On Feb. 5, the agents searched Elsayed’s home, car and laptop. At the agents’ suggestion, Khatib cancelled Elsayed’s student visa on Feb. 11. The next day, U.S. immigration officers detained Elsayed and he now faces deportation, with a hearing scheduled for March 4. 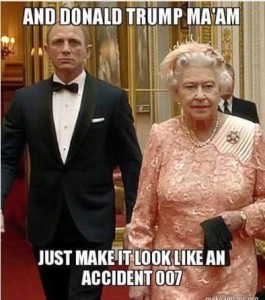 All of this because Emad Elsayed made a hypothetical statement expressing what many Americans, non-Americans and anyone who has been targeted by the presidential candidate think and feel.

Since his entrance in the race, the Internet memes and videos mocking the joke of a presidential candidate have been flooding newsfeeds around the world, some mocking his appearance, others criticizing his discriminatory statements and even some with violent suggestions. But freedom of speech, right? Or does that only apply when it comes out of the mouth of a white male?

Ironically, the hypothetical comment Elsayed made is similar to those that the delusional Trump has made towards Mexicans, Muslims, women, the lower class, disabled, etc. This is a clear example of hatred breeding more hatred. 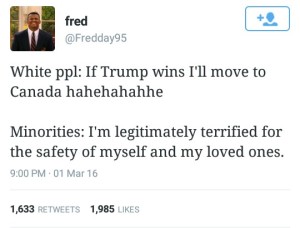 Trump has reignited the fears of the most racist of Americans, voicing what their deepest selves would scream out if it were socially acceptable. Spewing words of violence and bigotry, Trump has shamelessly riled up the inner racism of white America’s elite and uneducated, feeding on their internal panic and creating not only Islamophobic hysteria, but perpetuating xenophobic hostilities towards the underprivileged, the disabled and communities of color. Trump feeds off the fears of easily manipulatable Americans.

In a post-9/11 America, hostile attitudes towards Arabs, Muslims, or anyone who could be mistakenly identified as either have resulted in heinous racism and disgusting hate crimes. While the GOP is run on the “us vs. them” foundation, we haven’t seen a Republican candidate so openly and unapologetically racist in decades. Aside from having no real political credentials, Trump has spoken of implementing policies of an elitist society that is frighteningly similar to Hitler’s Nazi Germany.

And now, a student with a once-bright future is paying the price for expressing his opinion in a country that upholds Trump’s right to spew hatred. God bless America.

WE SAID THIS: Don’t miss Why Arabs Should Be Worried About Donald Trump.