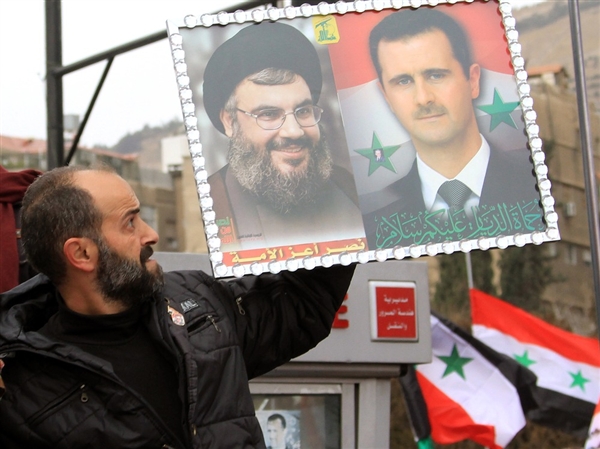 For months, the Syrian opposition has been accusing Hezbollah of waging a war against the Syrian people. Reports increasingly acknowledge the presence of Lebanese fighters, fighting alongside Assad´s army, on Syrian soil, namely in Shiite villages along the border between Syria and Lebanon. Even though the extent of the implication of the Shiite group in Syria cannot be verified, it was clear the cum-militia had, in some measure, blood in their hands.

This was confirmed when, in a televised speech, the leader of the Lebanese organization, Hassan Nasrallah, said they are ready to protect the Syrian regime. Nasrallah affirmed Syria has true friends in the region and the world that won’t permit Syria to “fall in the hands of America, Israel, and Takfiris [jihadist group linked to Al Qaeda]”. He added that members of Hezbollah were “providing appropriate aid” to Syrian government forces.

He however denied Iranian forces are deployed in Syria, although he acknowledged there are a few “experts” who have been in the country for decades, although they are not members of the Revolutionary Guard as the Free Syrian Army has frequently denounced. The Syrian opposition was swift to denounce the “threats” from Hezbollah.

Using his usual defiant tone, Nasrallah also warned the rebels: “you will not be able to overthrow the regime by military means.” Further threats followed: the fact that they do not exist today does not mean they will not get there if necessary; “can you imagine what would happen in the future if things deteriorate to a point that requires the intervention of more resistance forces?

Do not hesitate to go to Syria. The “Party of God”´s leader traced a red line: an attack on the shrine of Sayyida Zainab in honor of Prophet Muhammad’s granddaughter, nearby Damascus (in Iraq, the destruction of a Shiite shrine in 2006 lead to years of sectarian bloodletting between Shiites and Sunni Muslims) . That would make  the situation spiral “out of control”, said Nasrallah. Today, about a thousand members of Hezbollah protect the building. Another 2,000 volunteers are apparently posted in Damascus, while between 800 and 1,000 fight near Al-Qusayr (data from AFP).

Hezbollah has, since the start of the conflict, denied any kind of involvement in the Syrian conflict and has remarkably restrained in keeping Lebanon out of the conflict. Why would Nasrallah threaten wider Hezbollah intervention in Syria now? The most likely reason would be internal politics, for he is losing control of Hezbollah now that Iran is pulling more and more of its fighters into combat to support the Syrian regime offensive.

We also have to take into account Lebanon is nowadays facing a huge power vacuum after the resignation of its Prime Minister, in which the Shiite organization had a lot to do. Hezbollah is at the same time undoubtedly afraid of the loss of a strategic ally in the region, that would become even more serious if Iran comes under attack throughout the coming months.

That would on the one hand weaken Hezbollah´s military capability, one of its strongest leverages, and would on the other hand upset a strategic balance that has been in force in the region for decades, a balance which is already very frail. Nonetheless, many in Lebanon, even amongst its supporters, are wary of Hezbollah´s intentions and moves, as they are directly linked to Lebanon´s already fragile stability and might end up in another descent into violence Lebanese are not ready to endure again.

Many believe the organization has felt somewhat forced to acknowledge its involvement now, in the face of a ramping number of funerals of Hezbollah martyrs. The militia´s involvement seems to have escalated mostly throughout the last ten days, and has spread over new areas further north, namely in Al-Qusayr, where Hezbollah  has never had a deep presence and cannot thus claim it is defending its partisans.

The organization´s aim aim seems to be maintaining a corridor with access to the sea through Syrian ports in order to allow the smuggling of Iranian weapons (which will probably later target Israel, even though Nasrallah denied their attacking the Jewish state with a drone) into Lebanon. Liberating certain rebel-held territories are also crucial to prepare a possible retreat of Assad and his allies to coastal towns around Latakia.

Most Hezbollah militants, who form what they call “popular committees”, believe it is their moral and national duty, and fight in the name of God, in the name of their beliefs and their allegiance. But some fighters decided to participate in this war because their land was being attacked and their people were being murdered by the Syrian rebels, notably in northern Lebanon, where Tripoli has become a small-scale testing bench of the Syrian conflict.

All in all and despite many stakeholders’ wishes, Hezbollah’s is one kingmaker to always take into account and its presence in Syria would beyond doubt be a game changer in the region. If the number of Hezbollah fighters alongside the Alawites increases even more, the rebels will probably not be able to defeat Assad. That could prompt them to finally agree to some kind of peace talks with the Syrian regime, with or without mediation from external actors (Brahimi won’t be an option, as he has already expressed his wish to resign).

The most likely outcome will then be a power-sharing agreement whereby all factions and minorities will be represented in the Government, in the style of Iraq and Lebanon itself. That would almost surely mean Hezbollah could guarantee a certain influence in Syrian politics, which will be then intertwined again with Lebanese. Besides, that will provide Iran with a huge land base from which to extend its influence in the region.

Despite an initial equilibrium, as Iraq, Jordan and Lebanon will regain stability, Israel will feel even more threatened, and that is never good news. Not a promising outcome, but what would be?