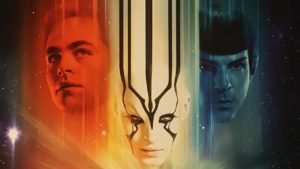 Trekkies in Dubai, you’ll definitely love this news. The third and latest Star Trek Beyond trailer has just been released and it features glimpses of Dubai. The movie’s cast were spotted filming in October 2015 at Burj Khalifa, and we can now see the results-ish…

According to Digital Production Middle East, the producer of the film, Jeffrey Chernov, revealed that he picked Dubai as a location because they were looking for a futuristic landscape; saying, “we came searching for the future and we found it in Dubai. Dubai represents the future of what the frontier would be like in our film, and is an excellent place to shoot the movie, as well as a special opportunity for all of us. This is not just the third of three movies, the movie has a new refreshing twist, and Dubai’s great visuals really fit the story.”

The action scenes are intense and the motorcycles look great, given that it is directed by Justin Lin of Fast and the Furious fame. The 2:30 minute long trailer also includes a glimpse of Dubai’s skyline which gets a complete make-over under heavy CGI.

WE SAID THIS: Stay tuned as the movie is set to be released on July 21st in the UAE.