The Sad Anniversaries of the Egyptian Revolution 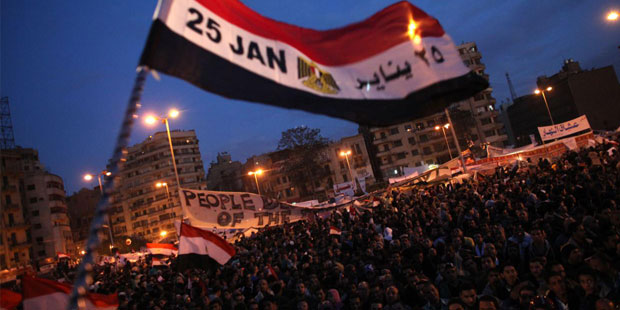 It’s three years to the day. Three years since 25 January 2011.  Everything has changed at the speed of light, although nothing has really changed.

What seems to be sure is that both Islamists and Security forces have done a great job creating and feeding hatred among Egyptians for their own benefit. None of them have really pursued freedom and justice as much as they have pursued victory.

The First anniversary of the Egyptian Revolution.

The Supreme Council of the Armed Forces declared 25 January to be an official national holiday to mark the first anniversary of the Egyptian revolution with marches, concerts and parades organized across Egypt. Supporters of the new regime took to the streets to celebrate one year of victory.

On the same day, protests were planned across the country demanding the downfall of the military junta, which took control of Egypt following a “soft” coup d’etat against former President Hosni Mubarak.

One year after the uprising, little had changed, with Mubarak’s dictatorial shoes filled by the top brass of Egypt’s armed forces.

Mohamed Mahmoud, Maspero, hundreds of deaths and very few officials being held accountable for their crimes – Egyptians saw in this new government an extension of the old regime.

The Second anniversary of the Egyptian Revolution.

Thousands took to the streets to protest against democratically elected President Mohamed Morsi and his Muslim Brotherhood. A wide spectrum of parties and groups marked the occasion with demonstrations across Egypt to protest against the political monopolization by the Brotherhood and for the demands of the revolution to be met: freedom, bread and social justice.

Egyptians felt desperate, with an unprecedented polarization of society, against the backdrop of surging crime and a worsening economy.

The Muslim Brotherhood and its Freedom and Justice Party (FJP) did not participate neither in protests nor in celebrations. However, violence erupted across Egypt with dozens of people killed and hundreds injured nationwide.

The Third anniversary of the Egyptian Revolution.

The government called on citizens to celebrate and commemorate the anniversary by taking to the streets across Egypt, stating that security measures would be enough to secure these gatherings.

The Muslim Brotherhood and other groups who are against the current government called for protests on the same day.

People woke up to the sounds of helicopters circling above their heads.

The day was overshadowed by a wave of bombings on the 24th of January, killing at least six.

The Salafist group Ansar Beit al-Maqdis, meaning “Partisans of the Holy House” in reference to Jerusalem, claimed responsibility for the terrorist attacks.

Violent clashes also broke out on the same day between police, opposing civilians and supporters of the Muslim Brotherhood nationwide with dozens killed.

WE SAID THIS: Don’t miss “Before and After: Cairo’s Museum of Islamic Art“, which was destroyed in the Jan. 24, 2014 bombings.