An Open Letter to the Censorship Dude

Once upon a time, dictators, censorship authorities, religious authorities and practically anyone with a governmental stamp were able to ban us from certain content.

For many years, we weren’t able to watch a provocative movie or read a rebellious book simply because someone decided that we couldn’t – an idiot who was granted the upper hand over what we can and shouldn’t access.

Thanks to technology, those days are over. Now we can laugh at those censorship freaks who are living in a bubble believing that they can make decisions for us.

But in this article, I’m not going to talk to “us”, I’m talking to you, The Censorship Dude. 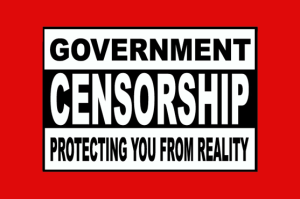 You’re probably sitting at your desk with the illusion in your mind that you have power over everyone else. Maybe your bosses made you believe that your job is actually worth something. Well, I hate to break it to you, but your job is worthless and, to be honest, you only have a job because we live in, well, Egypt.

In the spirit of helping other people, I want to introduce you to a couple of facts.

Your glory days are over. You can’t ban content anymore; technology has made the world more connected in ways that you probably can’t imagine.

Your Internet connection allows you to discover new books, movies or articles that you believe to be harmful for some people. And because you don’t know what “logic” means, you decide to ban this content, ignoring the very simple fact that other people have an Internet connection, too! And they also know how to Google things and think for themselves.

Based on religious concerns, you’ve ironically decided to play God and ban a movie from the cinemas, imagining that we all live in the same century as you. A century where we can only watch movies at the cinema.

I want you to know that in the century that we live in, the 21st, more people watch movies online than on TV or at the movie theater. I want you to Google these words to know what kind of world we live in now: “YouTube”, “Vimeo”, “Netflix”.

You might counter argue with me that in the countries where banning content is okay, we have shitty Internet, so it’s a nightmare to download a movie or stream it, but that’s not a problem anymore because there’s this great invention called Torrent!

We no longer have to worry about the Internet disconnecting and then having to start downloading the movie from scratch. We can find practically anything in Torrent format. We can download it and if the Internet goes down, the download will just carry on when the connection is back without the need to start over.

I know this is going to really piss you off, but I’ sorry to tell you that Torrents provide Ultra HD content, and if you don’t know what that means, it means that I can watch anything I want from the comfort of my couch with a quality better than some cinemas! It’s magical, I know.

Sometimes the government you work for doesn’t like Twitter. So some political adviser who probably has a weird thing against birds decides to ban it so that people can’t talk about how shitty the government is that you work in. Obviously, your government doesn’t know a very basic rule which is: What’s banned is desirable – الممنوع مرغوب

So this ban backfires and you find a million tweets talking about how stupid that decision was and, to make things worse, those tweets are coming from the very country – your own – where you tried to ban Twitter! And you end up looking very very bad.

Here’s a fact for you: There’s literally a thousand work arounds for banning any content online. Anyone with a brain and an Internet connection can change their IP address with a click of a mouse to access whatever they want online. It’s impossible to ban anything, ya man. Deal with it!

I hope that wasn’t a long read for you and thank God for the geeks and engineers who created Social Media, Torrents and Online Video Players to save us from living in the past century you’re stuck in. Also, thanks to them, you can no longer play God, banning this and allowing that.

So please, save yourself the headache, because you can’t do anything about it, and start looking for another job that’s actually worth something. For God’s sake, man, stop embarrassing yourself!

Anyone with an Internet Connection

WE SAID THIS: Don’t miss “5 Things Twitterati Should Know“.