Discovering MENA: Bahrain, an exception from the Arab Spring? 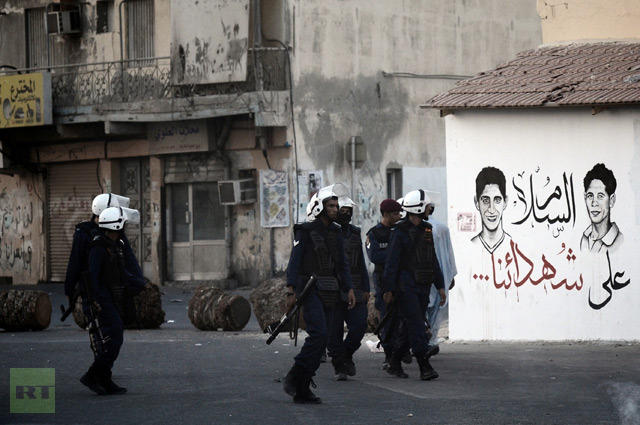 Weeks ago, Maria informed us about the banning from entering Egypt imposed on a renowned Bahrani activist, human rights lawyer and and vice president for the Bahrain Center for Human Rights, Maryam al-Khawaja. I then linked this news to Daily News Egypt’s article (in September, the country witnessed the first authorized opposition protest since the latest protest ban) and inevitably started thinking about what I personally like to call the “Bahraini exception”.

It all started when protests against the King Hamad bin Eissa al-Khalifa’s regime broke out in mid-February 2011 (the main opposition group is thus called 14th February Movement) in the tiny 1 million inhabitants Gulf island of Bahrain (well known as a banking hub and base for the United States Navy’s Fifth Fleet), following the example of their fellow Arab brethren Tunisia and Egypt. The demonstrations were mainly held in the now renowned Pearl Square of Manama (the Pearl Monument was however later tore down by the regime, in an effort to destroy any sign of disruption). In the outset, the regime itself tried to quench the protests but, in the face of growing discontent, the King had to ask for external help. And who did he call? Think about a powerful neighboring country whose main concern nowadays is the possibility of an “Arab Spring contagion”. Yes, you are right, Saudi Arabia headed the Gulf Cooperation Council-backed “Gulf Shield” initiative – the entry of Saudi and Emarati troops into the kingdom on 15 March. Indeed, the International Organization issued a statement confirming “the legitimacy of the entry of Gulf Shield forces into Bahrain based on the joint security agreement” between its members (in this respect, it has to be noted that while the conflict in Syria appeared as a priority on the Arab League’s agenda, the crackdown in Bahrain did not. Striking fact? Not really). Since then, dozens of protesters have been killed, scores injured (plus the thousands who have been arrested and even fired from their jobs, and the doctors and nurses who were sentenced because they had treated wounded demonstrators!), and the country has become what can be called a “police state”.

Nonetheless, at one point, the King apologized for the deaths and government officials said they were still open to reform. Later on, the Bahraini Government made several attempts to reconciling with its people, above all establishing the Bahrain Independent Commission of Inquiry, chaired by Egyptian human rights lawyer Mahmoud Cherif Bassiouni, to investigate the events of February and March 2011 and their consequences (the final report concluded that security forces used torture and excessive force against detainees arrested in the crackdowns), launching a “Bahrain Debate” (who has now stopped, though) and overhauling the country’s Constitution (the amendments would give the elected Parliament greater powers of scrutiny over the government) but the concessions fell short of the opposition’s demands for change. Legislative elections (although under rules established by the Sunni minority) were held in September but boycotted by the opposition.

As a result of the ongoing dissatisfaction, in February 2012, a huge mass of protesters celebrating the anniversary of the uprising tried to march to the former site of the Pearl monument, but were stopped by security forces firing tear gas and stun grenades. And protests kept on going (one of them recently saw the death of a 17 years old child), until the country recently decided to ban all rallies and demonstrations, justifying the decision by saying that political opposition activists had abused “the government’s tolerance for freedom of expression by allowing protests to turn violent repeatedly”.

As I already pointed out talking about Jordan and Kuwait, the opposition does not call for a revolution either, they do not look forward to the overthrow of its royal rulers. It instead calls for political reform, i.e., more power for the Parliament, the possibility of electing a Prime Minister and, above all in this particular case, recognition of the rights of the country’s Shiite majority (approximately 70% of the country’s population) by the Sunni monarchy, who has marginalized them for decades, leading to an apartheid-like situation. And precisely the latter issue stresses the existence of a much more significant confrontation in the background: the eternal rivalry between Sunni Saudi Arabia and Shia Iran. And underlines the reason why many accuse both Arab and Western countries of double standards (understandably, the protests have recently focused on a new target: the United States, whose administration decided to resume military sales to the country months ago). I mean, I can understand Western and Arab authorities’ concerns, fearing another violent Shiite-Sunni confrontation, like the ones that now plague both Syria and Iraq (and even Lebanon) but, come on, wasn’t their stance towards the “Arab Spring” all about respecting the will of the people?

Update: five bombs exploded on 6 November in the country’s capital, on what has been called by the regime a “terrorist attack”(recalling Syria, anyone?). Many believe this move could represent an escalation of the conflict into an even more violent struggle.