The second round of the group stage began on Tuesday the 17th of June, with host nation Brazil facing off against Mexico. The Brazilians were able to keep the Mexican offense at bay, while the Mexican goalkeeper Ochoa (nominated Budweiser Man of the Match) repeatedly denied any chance of a Brazilian advantage. 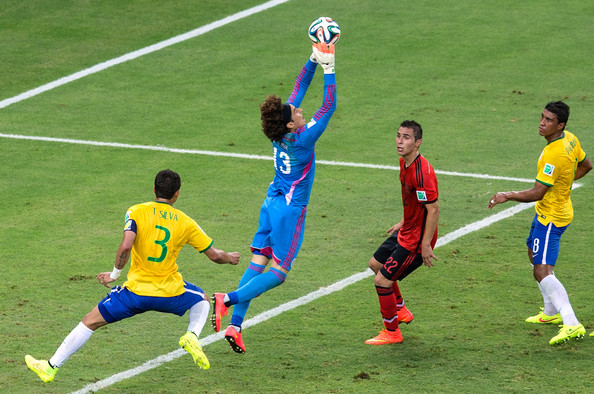 The second match in Group A featured Croatia against Cameroon, and with Eto’o out with a knee injury, the Cameroonian offense was in shambles. Mandzukić, with the help of Olić and Periśić, sealed Cameroon’s fate, as they become the first nation to face World Cup 2014 elimination.

Group B kicked off on Thursday, June 18th and featured one of the best games so far in the tournament, Australia vs. Netherlands. Fresh off their 5-1 win against Spain, the oranje gained the advantage in the 20th minute courtesy of “Iron Man” Arjen Robben. The celebration was short-lived as Tim Cahill equalized exactly one minute later. Both teams were relentless in their offensive attacks, and early on in the second half Australia was awarded a penalty, which Jedinak scored, putting the Australians ahead of the Dutch. 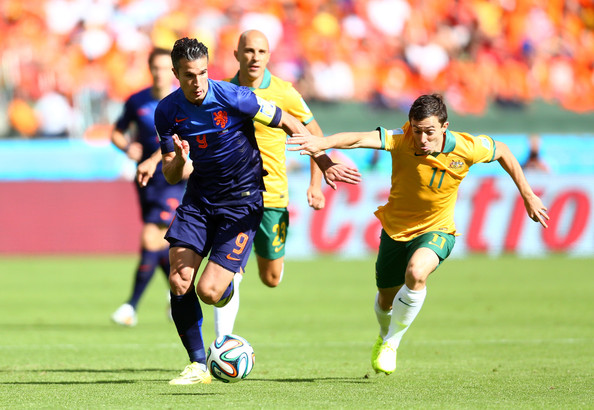 But not for long. Van Persie (who will miss his next match because he almost snapped an Australian’s midfielder’s leg in half with a two legged sliding tackle) put his squad back on the map with a goal in the 58th minute. Ten minutes later, Australia’s world cup dreams were dashed by Memphis, who scored an insane goal, putting the Dutch within reach of the Round of 16 stage.

Former world champs Spain’s game against underdogs Chile was just as shocking as their game against the Netherlands. Most had assumed that Spain would bounce back ferociously and try to close the goal difference gap between themselves and Cameroon. Unfortunately, before Spain could pull their heads out of their asses, the game was over 2-0, ensuring the former champions’ elimination from the tournament.

Games in Group C began with Côte d’Ivoire vs. Colombia, and the goals didn’t start coming in until the 64th minute. James Rodriguez and Juan Quintero’s goals sent their squad through to the next round, due to the nil-nil draw between Greece and Japan. Colombia has not made it to the next round of the World Cup in 24 years, so it’s about damn time they qualified.

Drogba’s late appearance and Gervinho’s goal in the 73rd minute did little to change the outcome of the game, Côte d’Ivoire must win against Greece to stay in Brazil. The tie between Greece and Japan gave each squad a point, settling them both at the bottom of their group with one point a piece.

I wish I had bet a million Kuwaiti Dinars on the outcome of the Group D’s Italy vs. Costa Rica game, because I was certain that the Azzurri were going to disappoint, following their very strong performance against England. Italy will now have to wage war against Uruguay to stay in the tournament as only one of the two squads can go through. Two consecutive wins ensures Costa Rica’s participation in the Round of 16, and England… well, no one cares really. 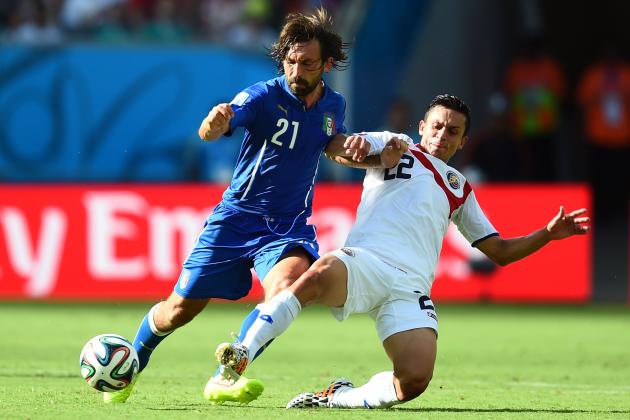 France decimated Switzerland during Group E’s second round of games, with a 5-2 (some may argue it was 6-2) full time result. Benzema, Valbuena, Sissoko, Giroud and Matuidi all scored, sending them through to the next round of the tournament. Switzerland somehow managed to score twice during the onslaught of French goals, but it was a relief when the referee blew the final whistle, the massacre was over. 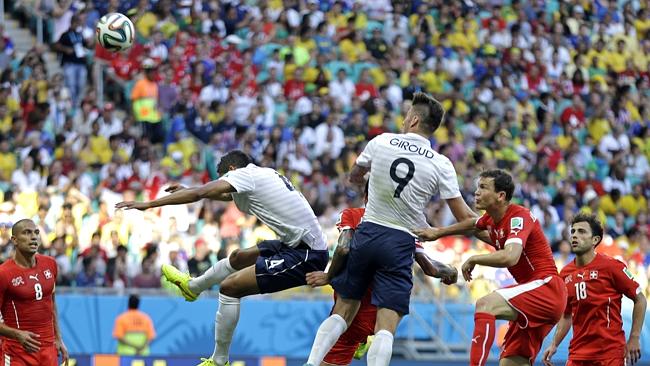 Didier Deschamps’ team surprised most, as the French have performed pretty poorly ever since France ’98, but with one match to go in the round robin stage, Les Bleus are sitting comfortably at the top of their group.

Ecuador beat Honduras 2-1, leaving Honduras at the bottom of the group with zero points. Which I think is fine, because they are literally a squad full of thugs. Ecuador and France will most likely go through to the next round, unless Switzerland manages to beat Honduras.

Group F’s games began with Argentina vs. Iran, which in my opinion should have ended 2-0 to Iran, but sadly Iran’s fate was sealed by Messi at the end of the second half. Argentina remains at the top of Group F with 6 points, followed by Nigeria, who defeated Bosnia & Herzegovina 1-0.

The “Group of Death” (Group G) began with Germany vs. Ghana, an incredible game from start to finish. The Mannschaft and the Black Stars played an entire first half without fouls or cards, it was a truly beautiful 45 minutes. The tackles were clean, the game play was quick and both teams were relentless in their pursuit of the opposing team’s net. 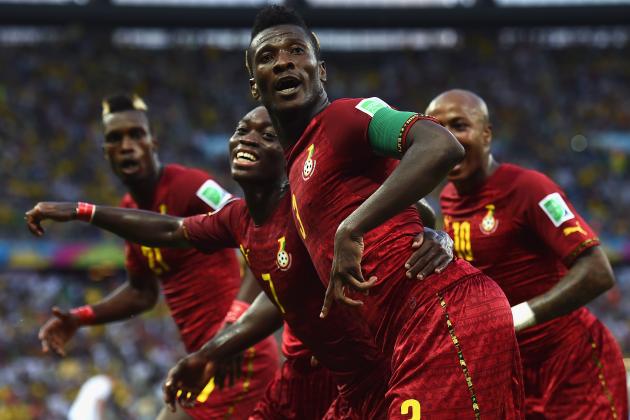 All the action began with Götze scoring in the 51st minute. The Black Stars did not let defeat settle in, as they quickly equalized in the 54th minute thanks to Ayew. A short while later, Ghanaian superstar and squad captain Asamoah Gyan found the net, sending his side into the lead. Germany was clearly unimpressed by this and subbed out Khedira and Götze for two players who score goals as easily as they breathe, Miroslav Klose and Bastian Schweinsteiger. Within ten minutes, Klose closed the gap between the two sides, ending the match in a 2-2 draw.

The USA met Portugal in the Arena Amazonia Manaus. With no points yet in the tournament Portugal needed a win or a draw to stay in the competition. Nani’s goal in the 5th minute lifted Portuguese spirits and strengthened his side’s morale. But Jermaine Jones’ equalizer in the 64th minute signaled the real star of the game. Clint Dempsey‘s 81st minute goal seemingly sank Portugal, but luckily Varela’s last minute header saved his side from immediate elimination.

Algeria moved up to the second slot in Group H after dominating South Korea in a 4-2 shock win. As it stands now, Russia and South Korea are level with one point each, while Belgium is at the top of the group with 6 points, following two consecutive wins over Russia and Algeria. 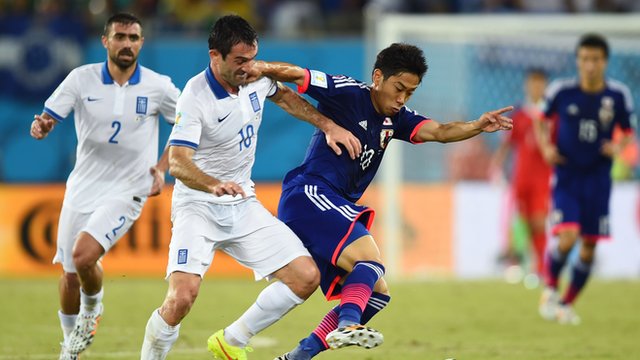 The Belgium vs. Russia game was perhaps the most boring game of the entire tournament so far, but thankfully that was countered by Algeria’s astonishing performance against South Korea. 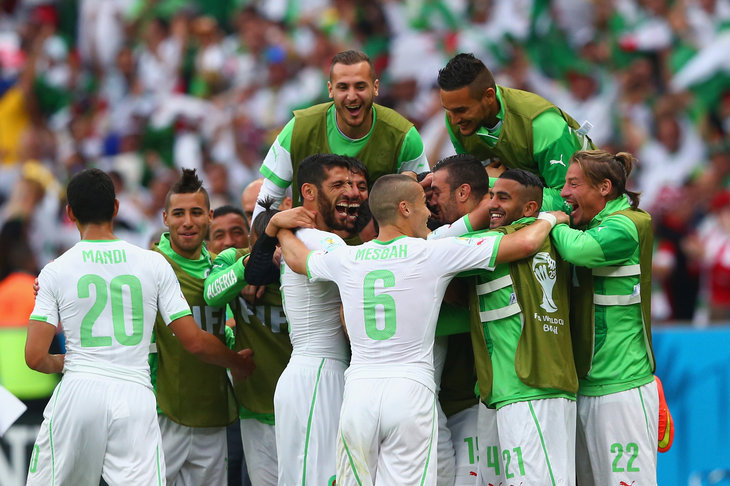 One more round to go!

WE SAID THIS: Check out more Second Round Wrap Up and Predictions.