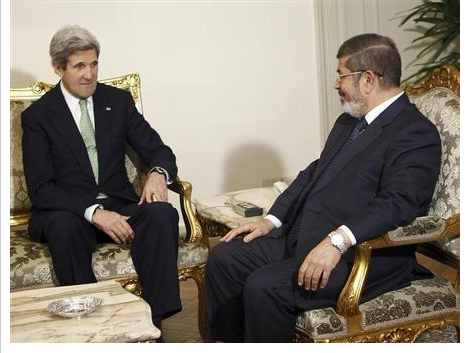 Sounds like a great title right? Especially for Egypt’s ailing economy, but there must be a catch right?

As some may or may not know, the U.S. Secretary of State John Kerry was in Egypt for meetings with Mursi’s government and has announced that the U.S. acknowledges Egypt’s “extreme need” as the economy continues to crumble.

The $250 million in budget aid will be given to Egypt, after President Morsi confirmed that they will reopen talks with the IMF for the 4.8 Billion dollar loan that was agreed on in principle last November.

“In light of Egypt’s extreme needs and President Mursi’s assurance that he plans to complete the IMF process, today I advised him the United States will now provide the first $190 million of our pledged $450 million in budget support funds,” Kerry said in a statement at the end of a visit to Cairo. The $190 million is part of a $1 billion pledge by U.S. President Barack Obama in 2011 after Egypt’s popular uprising.”

We all know whenever a governement claims that their Aid is out of “good faith” as Kerry stated over and over again, that pretty much means there is a noose hanging over the country’s head and you are forever indebted to those you have taken the loan from.

We Said This: Ah Egypt, how far you have fallen?