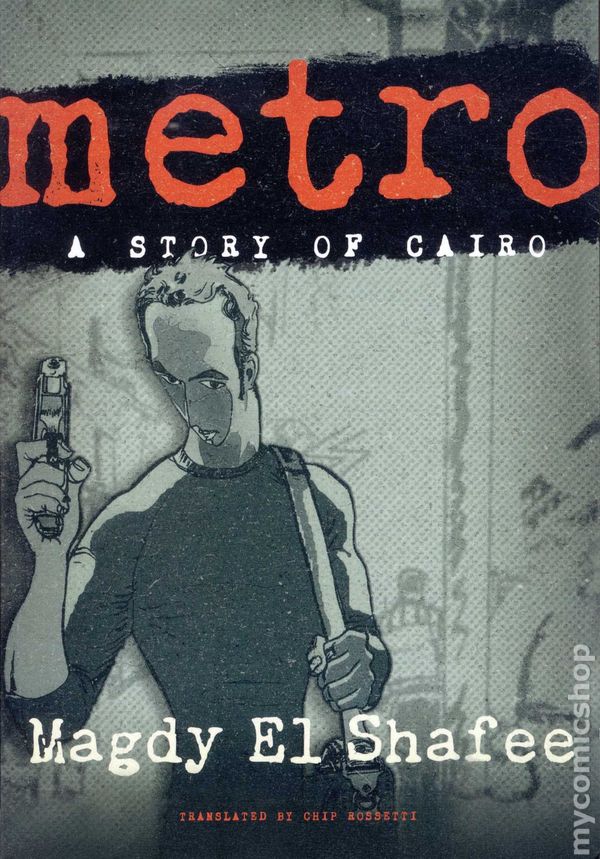 Magdy El Shafee’s first book, Metro: A Story of Cairo, is a graphic novel written in 2008. If you don’t know who El Shafee is, he was honored by UNESCO in 2006 for his comic series “Yasmine and Amina.”

Now let’s talk about Metro. If you haven’t heard about it, it’s probably because it was banned from publication in Arabic in Egypt, for “offending public morals.” Metro centers on corruption, poverty and injustice in Mubarak’s Egypt.

I have been wanting to read this book ever since it was published. I finally got my hands on the English translation by Chip Rossetti, which came out in May 2012 by Metropolitan Books (available at Diwan Bookstores).

For those of you who want the Arabic version, you can download it from http://www.cspublishers.com/blog/, a publisher in Lebanon specializing in adult graphic novels.

I heard a rumor that in Egypt, the Arabic print version is available in Kotob Khan in Maadi, Cairo. Wherever you manage to find one, just get it! Because you’re missing out on a lot.

Metro really makes you feel how claustrophobic Egypt was under Mubarak. The corruption, injustice and fear filled the streets and alleyways.

El Shafee is truly devoted to his profession and his talent. How many would go to jail for years because they believe in their work and decided to stand by it no matter what the cost? It’s because of people like him that we had our #Jan25 revolution.

Even under Muslim Brotherhood rule, El Shafee continued to speak out against injustice, ending up in jail in April of this year.

One of the things I really liked was the realism of his characters. Dina the journalist, who is devoted not just to her profession but to the hero of the novel Shehab and to Egypt herself, participates in as many protests as she can. Shehab is the software genius who, together with his best friend and sidekick Mostafa, face and overcome various obstacles and corruption.

Wannas, the old man, represents the class who is literally living hand to mouth. The art, along with the language of “living inside the walls” enables the reader to feel this oppression and frustration, especially apparent in the youth through Shehab, Mostafa and Dina.

When asked if he would be careful with what he writes following the banning of his book, El Shafee said the problem doesn’t lie with state censorship, it lies with self-censorship. One must totally free himself from all limitations in order to be truly creative; And that, he says, is the biggest challenge.

El Shafee is also disappointed that he isn’t able to share his work. He says it’s like inviting people to dinner, and then the government takes all the food. “It’s embarrassing.”

Graphic novels are an exciting, creative way of expression and are growing in popularity in the Middle East, especially in Egypt. Autostrad is another graphic novel released by Division Publishing (http://divisionpublishing.com/) in 2011 and available at nefsak.com. Autostrad has different stories by several writers, in Arabic and English.