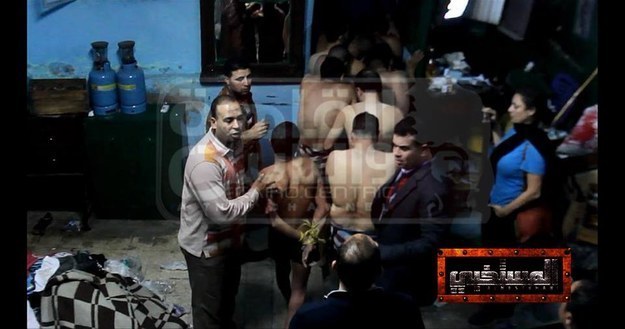 Following a Dec. 7 late night raid on Bab El-Bahr hammam in the Ramses area of Cairo, which saw the arrest of at least 25 men and perhaps up to 40, Cairo’s LGBTQI community and its supporters have been galvanized with fury and fear.

“I’m still in disbelief. How far would a reporter go to boost her career at the expense of ruining 33 lives? Maybe even 33 families. I’m filled with rage,” M.M., a lesbian physician, told us.

The raid was spurred by Mona Iraqi, presenter of the TV show El Mostakhbai, and her film crew, who reportedly steered police to the bathhouse on unverified allegations that the men inside were spreading AIDS.

“For the first time in the history of Egyptian and Arabic media, we lead the morality police to storm the biggest den for male group sex in the heart of Cairo,” a trailer for Iraqi’s program, which airs on the private, pro-government channel Al-Qahera Wal Nas, claimed.

The men were herded out of the bathhouse half-naked and into police trucks waiting outside, which was captured on film by Iraqi’s crew. Iraqi also posted photos from the raid on her Facebook fan page and personal profile, although they have since been removed from her public page.

“That night, I got off the phone with my girlfriend, I saw the news and immediately commented on the reporter’s page and profile. I didn’t curse. I just asked her if she was happy now. I think I hit the nail on the head because then she banned me from commenting,” M.M. continued.

“[She] has a TV program, [she] is supposed to be well educated and knowledgeable, [she] used to live outside of Egypt, [she is] a filmmaker and, above all, a human being, and instead of supporting people living with HIV and LGBTQI rights… she makes episodes about homosexuals in Egypt and says they’re responsible for the spreading of HIV – innocent people caught by the police, their lives are going to be destroyed,” A.M.F., another member of Egypt’s LGBTQI community, told us.

“Instead of fighting stigma, she does this. I’m really so depressed and disappointed, but on the shiny side, a lot of people are blaming her and defending our rights,” A.M.F. continued.

A number of outraged comments flooded Iraqi’s profiles, most of them condemning the TV host.

“You see the picture of you filming with your phone?” journalist and human rights activist Hossam Bahgat wrote. “Your picture will be spread for years to come with every article, investigation or book on the collapse of Egyptian media ethics.”

Algeria Hit With 5.2 Magnitude Earthquake and the World Turns a Blind…

“The way she did it and talked about it is just so disgusting, she violated every single human right in the book and showed no remorse,” H.S., a gay Egyptian, told us.

The raid, reported to be the largest since the infamous 2001 Queen Boat incident that saw 52 arrested, comes after a string of cases and events cracking down on Egypt’s LGBTQI community over the past two years.

“To speak about the LGBTQ community in Egypt is to speak about what it’s like to live underground, leading a double life. It’s filled with threats, harassment and violations of basic human rights, safety included,” M.M. explained.

“It’s the first time for me to feel so unsafe. It’s like I could be arrested at any minute for falling in love with a girl, considering that I, myself am a girl, too. I still walk hand in hand with her. They can take away my freedom, but never my soul,” she said.

Human rights lawyer Mohamed Bakir told Ahram Online that there have been close to 20 similar cases this year alone. However, no law exists against homosexuality in the Egyptian legal system. In previous cases, suspects have been charged with “debauchery”.

“I never understood how a person’s orientation can be penalized by law. This person didn’t decide to steal, murder or any form of crime, he/she just chose to love differently. At the end, it’s all the same one love we all experience,” G.I. from Arab Academy for Science and Technology told us.

“There is no law against homosexuality in Egypt, yet there is also no law that protects LGBT rights. They lock LGBT people up for no reason. We, gay men, go through a lot of problems and dangerous encounters in Egypt, with nothing to protect us. We get death threats, mugged, bullied and killed for no reason other than just being different. Even our dating apps and sites are spied on by the police,” H.S. explained to us.

Despite the Ramses raid and ongoing crackdown on Egypt’s queer circles, their members remain resilient despite renewed fear.

“Queer people are the way they are because that’s how they are born. That’s how their body’s chemistry works. That’s what satisfies them. It’s not a choice,” G.I., a queer Egyptian, told us.

“I’ll be on air next Saturday and I will talk about HIV and homosexuality, also fighting stigma. I believe that it’s our time now to fight in many different ways,” A.M.F. said.