Interviewing Four of the Most Promising Stars in Sabe3 Gar to Talk about Women Empowerment, Game of Thrones, and Pop Culture!

March is Scoop Empire’s month to highlight women; those who lead, those who empower others, and those who are following their dreams! After the boom that happened with Sabe3 Gar, we sat down for an interview with the four rising stars that everyone is falling in love with; Nesrine Talaat, Fadwa Abed, Sarah Abdelrahman, and Hadil Hassan.

During a photo shoot with the girls for Kriss Magazine in Dusit Thani Lakeview, we bombarded their suite and took over for some chitchat with Egypt’s favorite future stars. The series gained a huge and unprecedented fanbase; largely because of how light and fun, yet realistic and artsy, it is. Even though this is the first time in front of a camera for the four young actresses, they literally slayed their roles. Stay tuned for our behind the scenes video of Kriss’ photoshoot with the girls, and for some other exclusive questions in April’s Edition of the Kriss Mag. 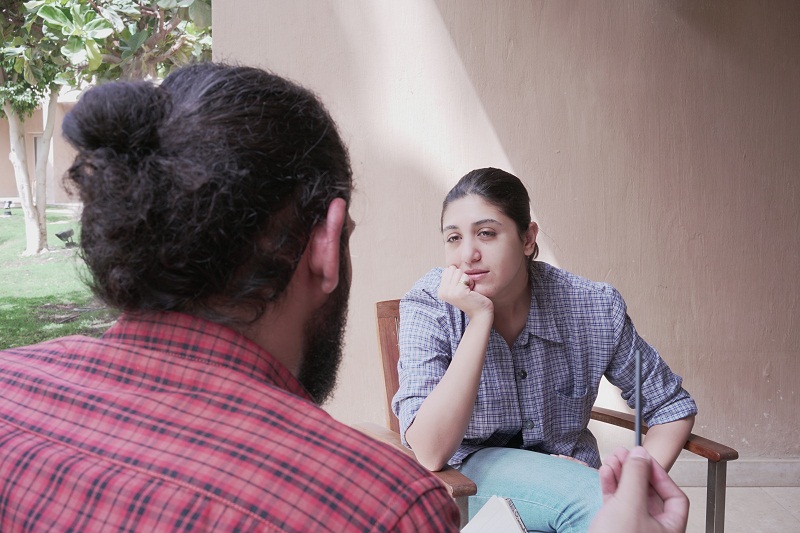 What are five things we’ll always find in your bags?

A small mirror, lip balm/gloss, cream, toothpaste, and a toothbrush!

If Nesrine would give an advice to Hind, what would it be?

Be strong, and don’t be afraid of people, yet don’t be influenced by them.

With no doubt, Essad Younes. She does it all; she’s funny, empowering, smart, charismatic, and always leading in what she does.

If you’d star in a Netflix series, what would it be?

What’s your favorite movie with a female in the leading role?

In Egypt, Khairy Beshara, and Atef Labib, and on the international level, Roy Anderson and Larse Von Trier.

Of the cities you’ve visited, which is your favorite?

Which is your dream travel destination?

Venice to attend their Film Festival.

How did growing up in Alexandria influence you as an artist?

People in Alexandria have a different taste in Art. Being always by the sea makes people always more chill and artsy.

How do you have fun?

I really enjoy movies and the cinema, and I also enjoy singing and cooking different recipes.

Who would perform the OST of your life? 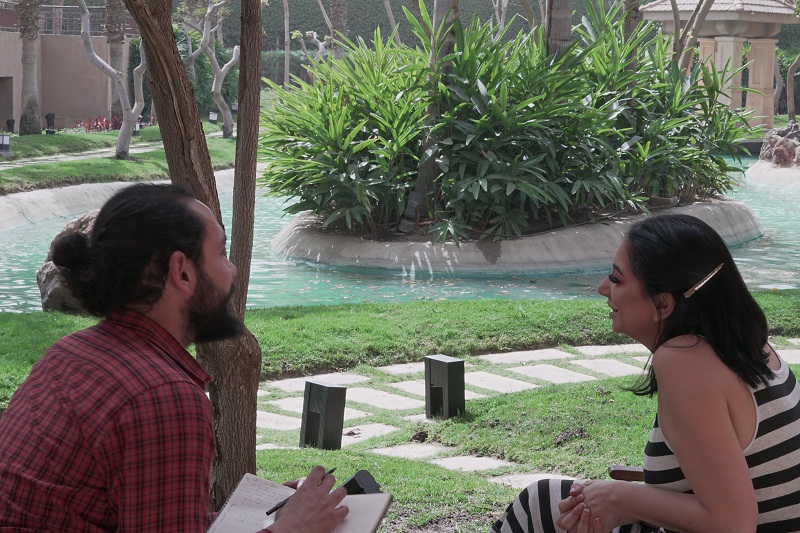 Egyptian I’d say Kojak, even though he’s literally on his way to be international. As for the international designer, I’d say Dior.

Which film directors would you want to work with?

Who is your role model?

I don’t actually have a role model that I want to be like, I want to be original and real. So when I look up to an artist he or she is usually unique and an inspiring individual; such as Pink and Dolores O’Riordan (lead singer of The Cranberries)

My dream role is definitely a villain, I long and look forward to playing one.

Your character, Doaa, is slowly becoming everyone’s favorite. How did you prepare for a role that is completely different than the real you?

It’s easy to relate to female characters, it’s only hard to combine different elements. In the months leading to the role, I had to get more comfortable with the religious lingo to connect with Doaa.

What’s your favorite fantasy movie when it comes to outfits?

I would say Lord of the Rings, but I think loved more the crazy outfits from Doctor Strange.

Which is your favorite Game of Thrones character and House?

Cersei Lannister, and obviously the Lannisters!

Would you rather live in Middle Earth or Westeros?

I think I’d choose Dorne in Westeros, land of the Martells. I love their different culture, architecture, and vicious women fighters.

What’s your advice for Doaa?

I think she shouldn’t be attached to traditions and culture. She needs to be herself, let go in a different way without any enforced thoughts.

All-time favorite is definitely, Breaking Bad. But I also love Sense 8, it’s so corny, yet so good. I also like Orphan Black.

Of all the cities you’ve visited, what’s your favorite travel destination?

What’s your favorite destination in Egypt?

It definitely will involve food, dancing, and lots of talking.

Which era would you like to play a role in?

The era of the Pharos.

If you can go back to any point in history and change a thing, what would it be?

I’d go back to kill whoever started the concept of wars. 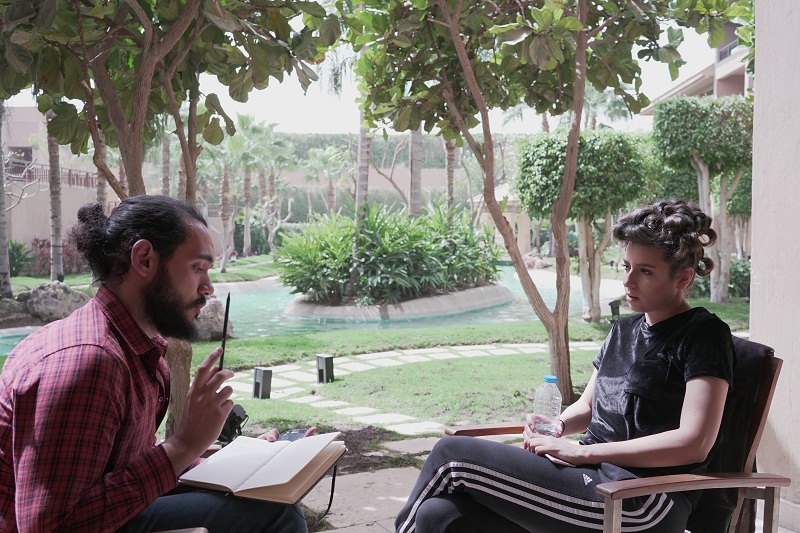 Orange is the New Black.

If you’d live in a fantasy movie, what would be it be?

Why do you think almost every girl in the city relates to your character “Heba”?

Heba is under-represented, yet she’s literally everywhere. The undergraduate with no plans at all, striving to find herself while facing the endless pressure from her family and peers.

How would you handle a guy in real life with the same mentality as Tamer, Heba’s ex-fiancee?

I wouldn’t go on with the engagement. Time is indeed important, but one should spend more time before taking critical decisions.

Which actor/actress do you wish to work with?

What’s your next project?

I’m participating in the second part of El Kenz, and another Belgium/Egyptian production called Sawah.

What is your advice to Heba?

Everything you’re going through is normal, but don’t let go of what you deserve. Also, stop smoking…

What’s your favorite destination inside and outside of Egypt?

My favorite inside is Old Sahel, and outside is London.

Name three cities that you want to travel, one alone, one with your significant other, and one with the girl-gang?

Alone, Bali, with the significant other, Machu Picchu, and with the girl-gang, Italy.

Cook at home, and watch a good movie.

And who’s your favorite Youtuber?

Who would you like to direct a movie about your life?

What’s a music festival that you wish to attend? 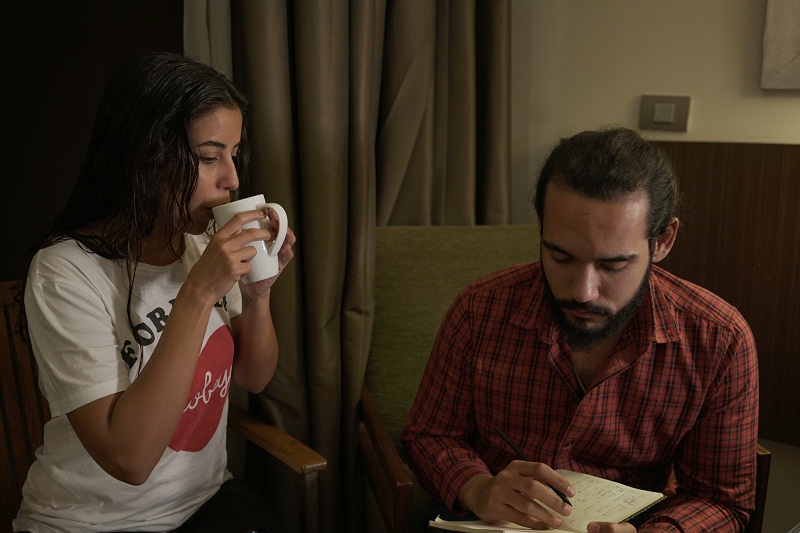 My items, but not my style. The stylist picked with me from my clothes what to wear for Mai, as her outfits are more classic than funk.

We’ve been following you on social media, and we know you’ve been cyber-bullied because of Mai’s controversial life choices, how did you deal with that?

I screenshot them all and wanted to reply back to all of them. But then I chose to only engage with the positive ones.

In what ways is Mai similar to you?

She’s stubborn and doesn’t care about anyone’s opinion or judgment, but I’m not as emotional. Also, unlike Mai, I’m super loyal.

Name an actor who you would wish to work with?

You should know better, that if someone wronged you once, they can do it a thousand times.

If you could choose a different character in Sabe3 Gar to play, who would it be?

What’s your favorite travel destination and what’s your dream one?

New York is my favorite, and I would love to travel to Latin America.

Who would sing the soundtrack of your life?

What are your future plans?

I’m back to normal, focused on my work and taking an acting workshop for the time being.

I’d love to do a serial killer one day.

What went wrong with Sahel?

What are your interests?

WE SAID THIS: We’re super excited for what the future has in store for the new Egyptian stars.