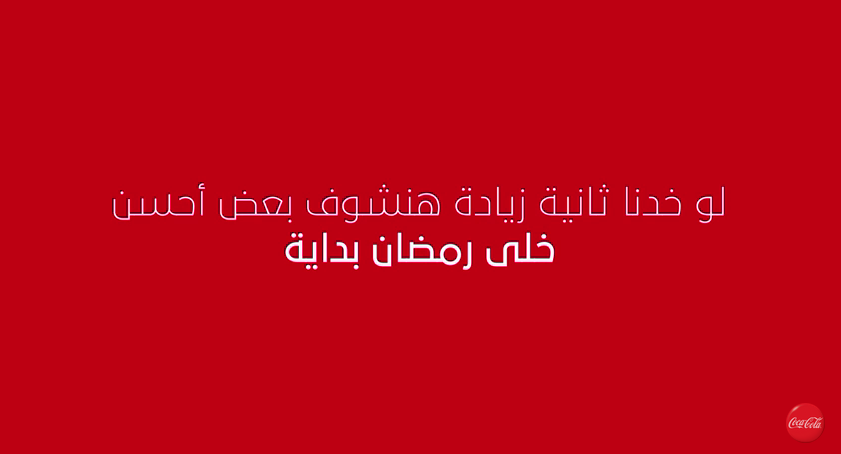 After two weeks of anticipation, Coke finally released their ads for Ramadan 2015.

For nearly three weeks now, people have been literally knocking on Coke’s door, asking them for the commercial, wondering why they haven’t released and when they will. Coke kept a close eye and ear on their social assets, teasing people up until its release. 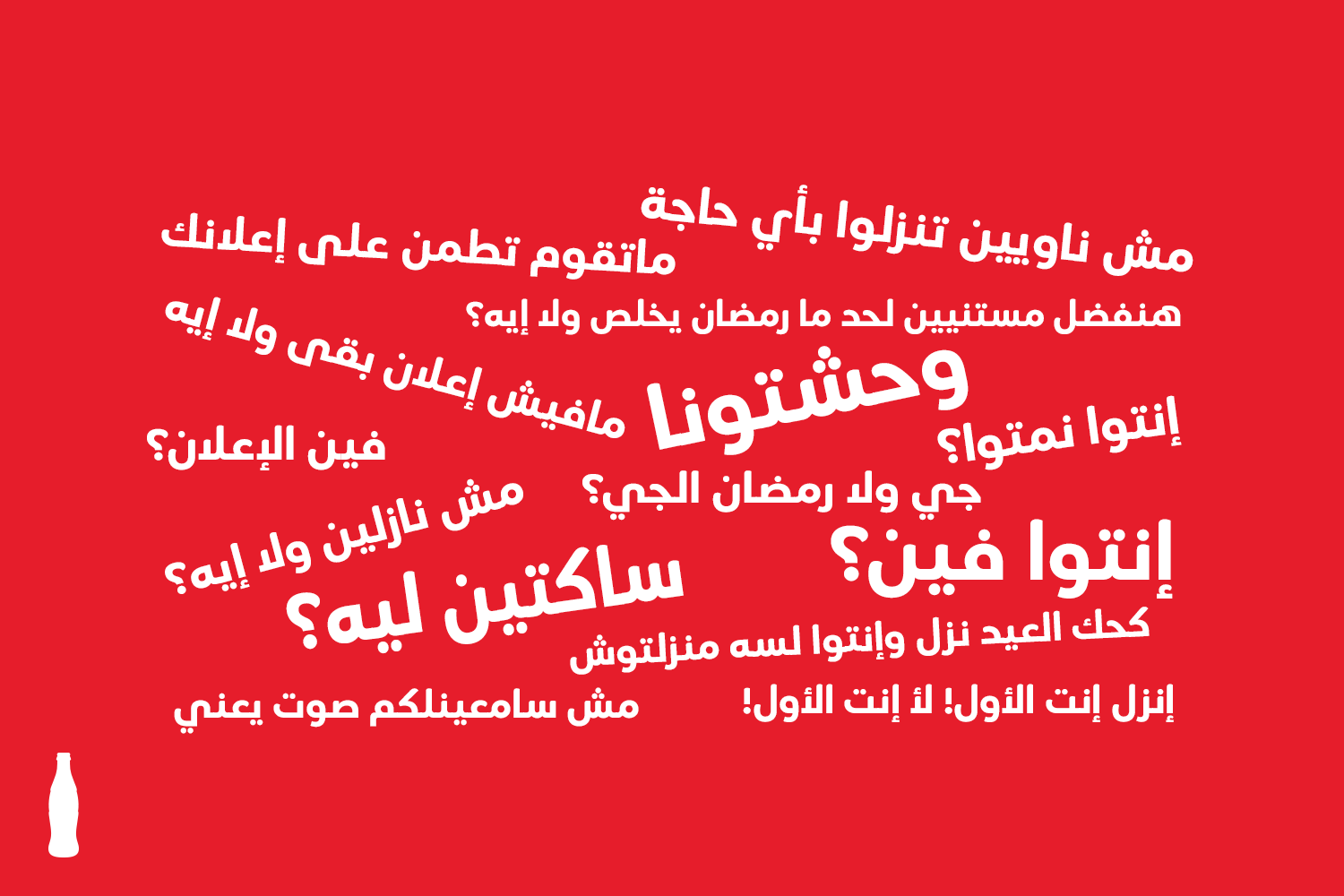 While I’m sure they had their copies ready a while ago, it was inappropriate to launch with the unfortunate events of last week, let alone talk about happiness. That kind of message would have fired back immediately, so Coke opted to lay-low, let the Pepsi wave pass and fade, let the country mourn in peace, then release the below “infomercial”:

People went berserk about this; before even releasing the ad, people had already declared Coke the winner of the Ramadan ad race. Coke wasn’t quite discreet about it either. They replied to a “fan comment” (below) posted a week ago and used it to further publicize their initiative. 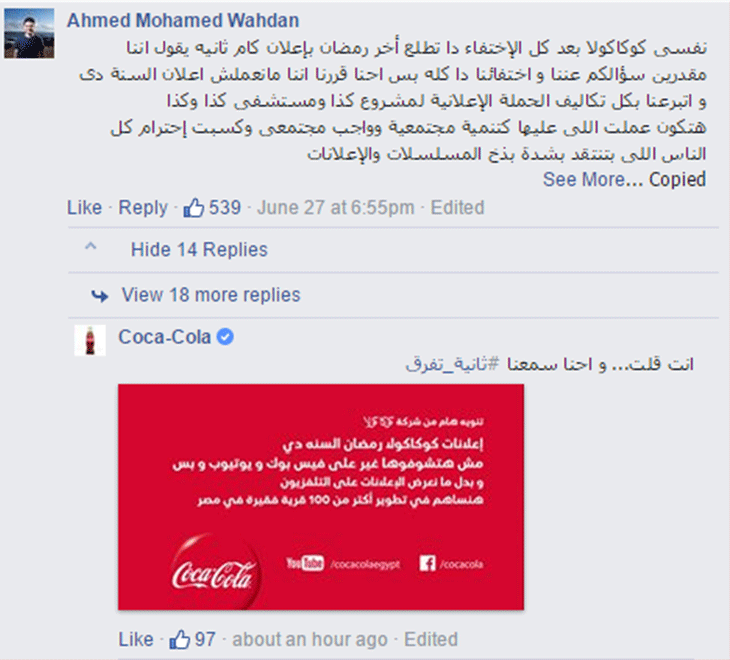 While the initiative is quite noble, it would be rather naïve to believe they made such a drastic change to their strategy over a fan request posted a week prior, so this could be derived from one of two things:

Either way, they took note of the hype it created and used it pretty well.

Looking at this from a pure business perspective, this changes the scene completely; thus the title of this article.

The fact that Coke (with all the moneybags it brings to the table) decided to completely cut its TV budgets in Ramadan and shift all funds to digital, makes more than one statement (charity not being one of them).

Where to get Published? Here are 6 Literature Houses in The Middle…

This can be seen as a declaration to the TV suppliers that we won’t be bullied around, we won’t pay these ridiculous amounts of money to put an ad on TV and we won’t be spending with you (if you don’t shape up, that is). An average TV spot in Ramadan ranges from 20-50,000 Egyptian pounds (per one time airing of a 30-second ad) all the way up to 100,000 pounds on a high-rated program like Ramez Galal‘s for example. Someone had to put their foot down and put an end to this.

If Coke (one of the world’s biggest brands) did this, I’m positive other brands will follow suit as well. Looking at the snowball effect this creates, we will be generally seeing less advertising on TV in Ramadan, less ad breaks, a cleaner ad scene and a more pleasant viewing experience. This however, would mean that channels might not have enough funds to sustain themselves, as the content they’re buying will not be compensated by sufficient ad money. So I would assume that only the big channels would survive this, while the current drifts the smaller fish into oblivion.

Either way, TV suppliers should be feeling the pressure now to facilitate a hopefully more regulated and decent price tag on Ramadan ad spots.

So what are we talking about here? Oh yes, the actual ads. Here’s what has been released thus far:

This was an adapted copy of the “Let’s take an extra second” campaign, released by Barcelona-based creative shop The Cyranos Mccan just a couple of months ago, which took two forms: a TV campaign (Blonde, Grandma and Bullying) as well as a social experiment viral video hammering on the same concept.

So there isn’t much of creative novelty here, but what Coke Egypt did is a very insight-driven campaign that validates how much of a judgmental society we’re becoming, which apparently is a global phenomenon. Labeling people as stupid, lazy, useless and the list goes on is something that everyone should think twice about.

Maybe if we do stop for “one extra second” and think, we can have a more inclusive view of fellow human beings.

The local adaptation of it is pretty well played as well, with back-from-the-80s superstar Esaad Youness doing the voice over, the stories of the people they chose, the provocative attention-grabbing labels (ebn-ommo, bee2a, etc.) and the well-tailored lyrics and composition of the song.

On a conclusive remark, let me play devil’s advocate here: The fact that people are talking about Coke’s decision to cut TV ads for charity more than they are talking about the actual campaign or what it represents – does that make it a good campaign? Or just a well-timed overshadow? Or maybe the copies are too mellow to stand against the giants of this year that they needed a push with a well played publicity stunt?

WE SAID THIS: I’ll leave you guys to think about that and let it sink in! 🙂