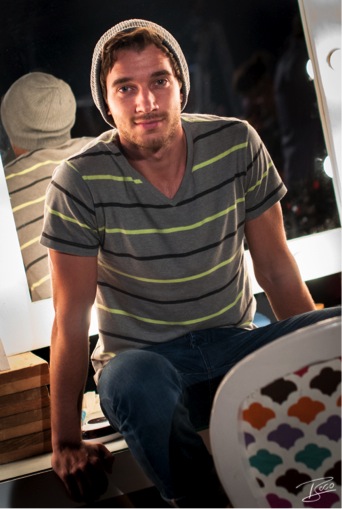 You surely know him. Well, everybody does. He is the blonde Egyptian guy whose Vines took the interwebz by storm. They are simply hilarious and guaranteed to make you laugh. Oh, did we mention that he is also a promising yet down to earth actor and model? Here is the scoop behind Egypt’s funniest Viner, Sherif Fayed. We are pretty sure we will be hearing his name a lot in the future. And don’t miss the exclusive Vine he did with Scoop Empire and Nineteen84 Management below: Why you don’t mess with Egyptian girls!

First of all, who are you!? I mean, seriously everybody wants to know more about you. Introduce yourself.

I’m 21 years old. I studied cinematography at Full Sail University in Florida. I was born and raised in Cairo. My dad is Egyptian and my mother is American. My daily motto is “People eat to live, I live to eat.”

What made you decide to do Vines in the first place? What inspired you?

Well it all started on a Friday afternoon. I was bored at home and watching Miley Cyrus’s “Wrecking Ball” music video so I decided to do a little spoof. I grabbed an aerobics ball and was swinging half naked on the balcony. Within minutes everyone was tagging their friends and it had endless “HAHAHAHA” comments. A couple of days later, I came across the Arab Vines page when it had only about 20,000 likes and decided to give it a shot. People loved it so I kept going.

How long does it usually take you to make a Vine?

Well, it always depends on the Vine – the more people in the Vine, the more time. When I’m alone, however, it takes about five minutes.

You have plenty of hilarious Vines, but which is your favorite so far?

My favorite Vine would definitely be the “How Arabs hear their ringtone.”

We love the Vines where you include your dad. What does he think about the whole trend?

My dad is loving it! He enjoys sharing the spotlight with me and everyone is talking about him now. He literally told me, “You better include me in every Vine you make.”

What is the weirdest thing that happened ever since you started doing Vines? Any funny fans/stalkers stories?

Nothing weird has really happened to me but I get noticed a lot now and people come up to me and ask to take a picture, which is very overwhelming.

We like your collaborations with Mohanad H. Who else do you hope or plan to work with?

I loved working with Mohanad. He’s an amazing guy and always makes me laugh, definitely one of my favorite Viners. There are a lot of great Viners and I would like to work with each one of them.

So, how were you chosen for Chipsy’s ad and tell us how was it like working with Ahmad Helmy?

I went along with a friend of mine to a casting agency and to my good fortune they gave me a call a week later with the Chipsy commercial. Ahmed Helmy is very down to earth and just as funny off-screen as he is on-screen. Other than that, I enjoyed shooting the commercial as all I had to do was sit at the table for two hours eating kebda sandwiches and Chipsy. What else could I ask for?

Since we have been seeing you in a couple of commercials lately, are you thinking about acting as well?

I have actually thought about acting and if the opportunity presents I would jump on it! Got any roles for me?

We believe that you are a true inspiration to lots of people; how are you planning to take it to the next level?

My next step will be starting a YouTube channel, which will provide a platform for me to do longer videos.

People seek my advice about making Vines and are always hesitant about whether they should post them or not, I encourage them to give it a try. If you have the chance to make someone else smile or laugh, then go for it. It takes a lot of courage to put yourself out there but once you do, don’t take any negative comments to heart. It makes me very happy knowing that my silly videos make so many people laugh and puts them in a better mood.

WE SAID THIS: For more about Sherif and access to his Vines, check out his Facebook page.