An Open Letter to Save Hollywood’s Villains

This is a plea from a movie fan in his late twenties. Please… don’t fuck with my childhood anymore. You know exactly what I’m talking about. Stop remaking films that take our beloved villains and turn them into heroes. Villains were more important than your heroes ever were, and here is why…

At the heart of any good story, there’s the great battle between good vs. evil. From Troy to Mean Girls, you always found someone to love and someone to hate. But you always needed that someone to hate to find enough emotion to love his “goody two shoes” counterpart. So in a way, your villains made those heroes what they are.

On the other hand, you also had a major audience, of which I am proudly associated, who always actually championed the villains. Why? They had depth, they had truth in their cause and they were fighting for a grand ideal that no mere mortal could ever hope to achieve.

They made your protagonists look like amateurs because the best thing your heroes could have ever hoped for was to stop the brilliant plan of the villain, their passion and their resolve. Villains had the balls to be something more than what they were, heroes just had balls.

Another notion you ignore is the fact that heroes were always these bigger than life characters with unattainable good looks and physique. They were simply un-relatable. They toyed with our imagination and our expectations as children, but don’t get me started on that.

Villains were always someone you could relate to. Who hasn’t ever wanted to give a big “fuck you” to the world when it’s refusing to pay them their due? We were being told that if you had an injustice in your life, you were just supposed to let it go and hope for the best, but these villains were taking matters into their own hands and plotting against the whole fucking world.

They followed their inner nature to want to rule the world, they were untamed, passionate and they never gave up, never. How do your heroes stack up against that? Yeah, I thought so.

What you have been doing recently with movies like Godzilla, Maleficent, Oz and now the new Dracula movie is just awful. You are taking our beloved villains and turning them into these safe, regular old heroes who only lost their way trying to find it back. You have taken away their evilness and made them people who turn evil out of love, jealousy or betrayal.

This is a LIE. Because you are stripping us of our right to believe that some men/women are just born evil. Why do we need to believe in that? Because it’s true, and because that is the truest thing that you need to know about a villain… they’re just evil. You had your bigger than life good doers, we had our bigger than life villains, and we want them back.

With this rate, I think I can predict your next project. Let me get my script writer cap on… 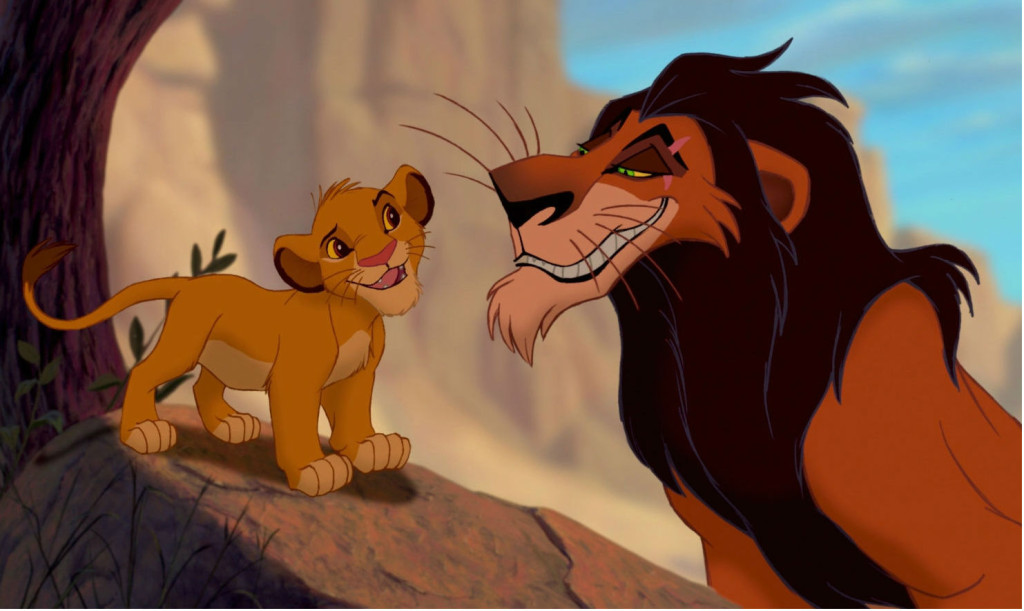 In the original ‘The Lion King’, Scar played the evil brother who murders his brother king to take over the jungle as the new king. He convinces the king’s son, Simba, to run away because he was the reason his father died and people would turn on him. Scar takes over, sucks as king, Simba grows up and takes back his kingdom and Scar dies.

BUT WHAT YOU DIDN’T KNOW was that Scar was a great brother when he and Mufasa were young. Scar had an undying love for Sarabi, who conveniently enough was in love with his brother, Mufasa. Scar did everything to try to win her over, but to no avail. Sarabi was only interested in being queen and she found that potential with Mufasa.

Mufasa, being the arrogant fool that he was, took her love for the real thing and never questioned her intentions. Scar tries to warn him but Mufasa becomes frustrated with Scar and casts him out. Scar grows old, alone with no family as a misfit living in shame.

He sees what is happening to the kingdom and knows that the real power belonged to the lionesses who did all the hunting. And as queen, Sarabi had total control over the kingdom. Mufasa was a sort of general manager of the kingdom, not really the CEO. You feel me, Hollywood? 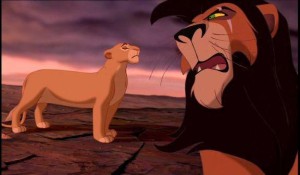 This is where it gets interesting. Sarabi comes to Scar in his exile and tells him that things are going to be different very soon and that she was looking to him to be her new bitch. He tries to shelf his love for her but he can’t. She tells him that in two days there’s going to be a stampede and the only way he could be with her is if he tracks down Mufasa, leads him to the stampede and kills him.

Scar applies the plan and he kills his own brother for that bitch. But the killing of his own brother leaves him in shambles. He cannot bring himself to become king after this heinous crime. He tells Simba to run away out of fear of what his mother might do if she finds him. Scar becomes the King nobody wants and proceeds to fuck up the kingdom with his inability to be king because of how hurt he is.

For the next few years, things go to shit. Food runs out, global warming makes the sun too hot in the jungles of Africa and Sarabi notices Scar’s mental state deteriorating. She goes to seek out Simba with the help of her top bitch, Nala. They track him down and form this elaborate plan to convince him that Scar murdered his father.

Nala plays the role of the damsel in distress and Simba saves her and falls in love with her. She takes him to see his mother and they both tell him how Scar killed his father and how he is running the kingdom into the ground and how everyone is going to die. Simba, being the little bitch that he is, falls for it and believes the story. 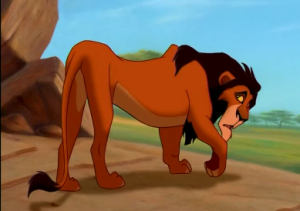 He goes back to the kingdom where he finds Scar waiting for him, as if he knows what’s coming. Scar goes off on this rant about how Sarabi caused all of this death and destruction. The story and hatred embedded within him from Nala and his mother is much more powerful than the words of an old fool who looks like he wants to be killed out of pity.

Scar announces that he is ready to meet his maker and that he will not fight it. His last request is that they go where Mufasa died and get it done there. He goes up to the hill where he last saw his brother. Right then, Mufasa’s voice rings out in the skies and Scar is the only one who hears it.

Mufasa forms in the clouds and addresses Scar. He tells him how he is sorry he never listened to him when he had the chance. He tells him that there is still hope. He can try to convince Simba to turn against his mother and take the kingdom to the right path.

Scar snaps out of his submissive nature and runs to Simba to tell him what Mufasa had just told him. But Sarabi quickly turns and attacks Scar and Nala joins in and they make it look like they were protecting Simba, their king.

Simba looks at this, confused. He was beginning to let go of that hatred when they attacked him. Now, he will forever feel like it was all in his head. Scar dies, Sarabi retires to their lair. Simba and Nala become the new king and queen and everybody celebrates. Scar is survived by no one, no family, no one to feel sorry him. The true story gets buried with him.

Did I just fuck up your childhood with that story? Did I leave you sympathizing with someone you always loved to hate? This is exactly what you have been doing. Get some new writers and a better imagination. Give us new stories, give us something new to grasp and stop holding onto the past. You have ruined books, video games, comic books… and now you’re running your very own productions.

Please, cut it out and go back to making thought-provoking blockbuster movies that we can all love for a few months. I’m getting old enough to know the “original” of the remake all too well and I am violently judging you for you subpar attempts to make it any better.

Hollywood, for the love of God, get your act together.

WE SAID THIS: Agreed, this ‘Scar’ remake is horrible… but not because it recasts the villain – because of its blatant misogyny!