As Egyptian girls who were brought up in a society like ours, we’ve grown into believing that traveling is not for us. It’s like a specialty reserved for men, especially if it’s solo or adventure traveling. However, wonderful examples of strong and powerful women prove everyone wrong every single day. Lots of Egyptian women show the world; and especially our society, that nothing could stop them and that the sky is not even their limit. Hamsa Mansour, an adventurer at heart, is one of those examples that deserve a standing ovation after her latest achievement.

On The Deep End: Here Are The Top Red Sea Destinations For Diving

Mansour was venturing solo for eight days on a cycling trip on the roads of the Red Sea and Sinai. Her initial plan was to cycle from Cairo to Saint Catherine and end her journey on top of Mount Catherine, hence, the name “777 km to Catherine”. Mansour stumbled upon a few obstacles, but even though she was forced to change her plans quite a few times, nothing was able to stop her.

It is finally time to start the journey! A bit anxious but more than that I’m actually excited!! See you on the other side of this thing, hopefully with 777 km in my pocket! #777km2catherine #cycling #cyclingadventures #adventuretime #solocycling

First things first, the starting point. Mansour’s passion for adventure traveling was the main driver behind this adventure. She’s been dreaming about it for so long and people’s comments never scared her away. In fact, they got her even more excited. “Women don’t do this alone for a reason. You will get kidnapped, raped and killed on the road,” she was told. Her passion and desire to prove everyone wrong encouraged her to pursue her dream and pushed her forward.

Despite the fact that Hamsa’s not an athlete; she’d rather call herself an adventurer, she was still able to prepare for her trip. She’s actually an Adventure Trip Leader at Omar Samra’s Wild Guanabana. The reputable adventure travel agency was keen on showing its full support to the family member throughout her whole journey.

Mansour started preparing by training herself to carrying weights and walking; and sometimes running, up and down the stairs till she couldn’t take it anymore. She then started taking fitness and swimming classes that helped her a lot in preparing herself. When the planning phase started a year ago, she planned her route in details, she got herself more familiar with the safety measures, and learned how to fix a bike. Other than that and training hard, she checked the weather and the wind direction; which was a game changer for her later on.

One of the main obstacles Hamsa faced on the road was the wind. Since her trip, that was planned to be in October, and was postponed several times to end up being in December, the weather was a problem. The weather was changing at that time and the forecast she checked beforehand totally changed after she was already on the road. Facing extremely strong wind for the first three days slowed her down. She ended up cycling for nine to eleven hours a day on average, resulting in some injuries due to the extra strain she put on her muscles and nerves. Not to mention that she was also sitting on a second degree burn since day two. Her serious need for medical care forced her to take a not-so-easy decision; she had to take a car from Ras Ghareb to Hurghada, took a ferry to Sharm, and got herself checked there. The decision was so hard it brought her down to tears, but she eventually accepted it and listened to her body. 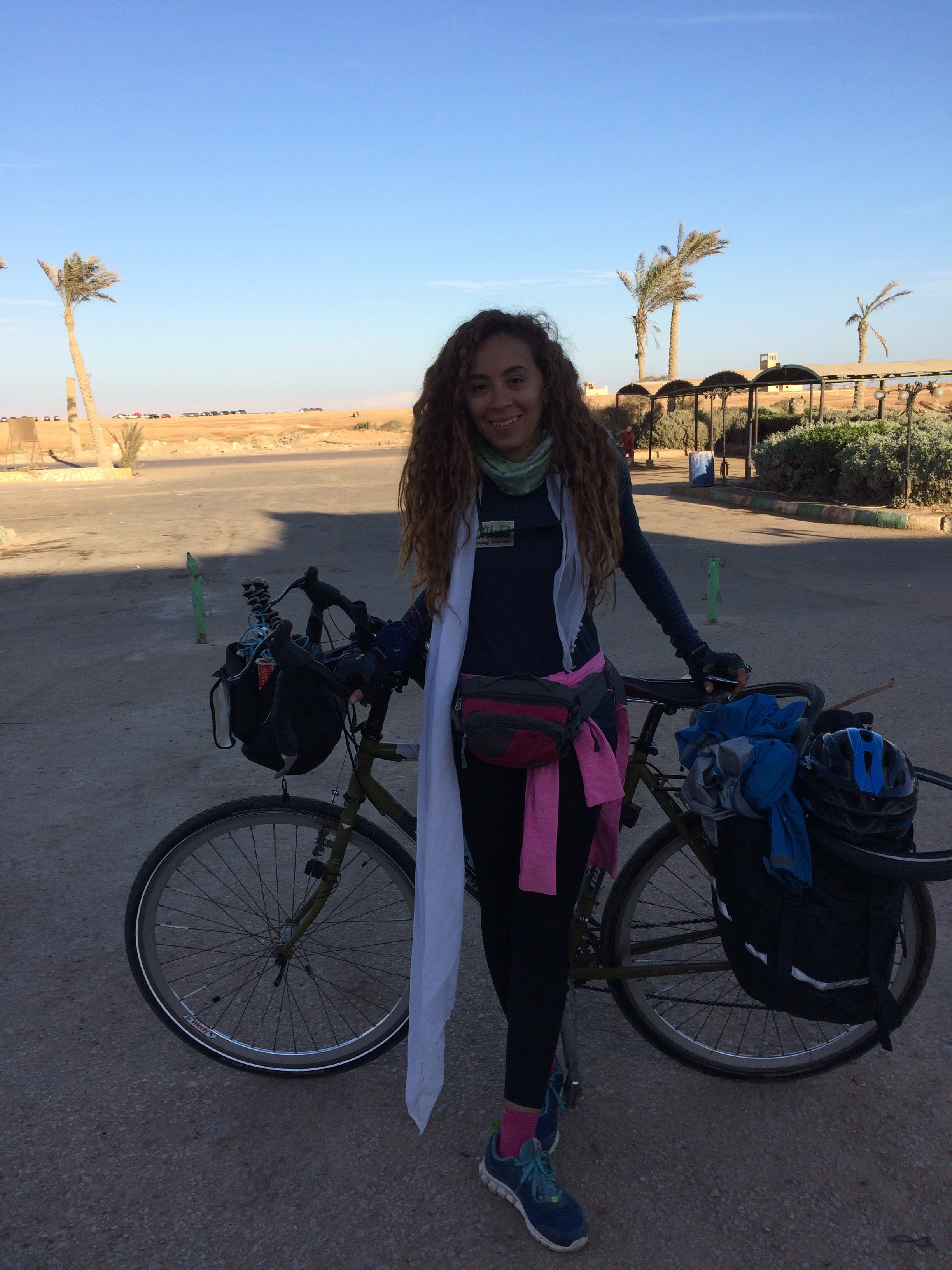 Listening to her body was one of the main things Hamsa learned from her adventure. She learned that she shouldn’t treat her body like a machine and that she wasn’t a robot. As she said that the challenge was 80% mental and not physical, she also learned to get over it and manage her emotions. “I was telling myself over and over again that it isn’t about the number of kilometers covered, it’s the journey and how it resembles life. It’s about the acceptance, dealing with challenges, and flexibility,” Mansour said.

Mansour, who eventually had to change her last stop to Nuweiba due to her multiple obstacles, shared with us the highlights of her experience. She said that she was able to see small details she usually missed when driving. “Like the sea suddenly appearing from between the mountains upon reaching Nuweiba and how tears rolled down my eyes upon seeing it,” she explained. She also told us about how she sometimes stopped to gaze at the beautiful views and took the time to appreciate the beauty of nature. In addition to her random conversations with the bedouin kids on the roads and them trying to race her. She was also surprised to meet several people on the road who previously heard about her adventure and stopped to encourage her. Such priceless moments empowered her, especially the moments when she reached every destination on the route.

Despite the challenges and obstacles Mansour faced, she was still able to break the stereotypes and prove to everyone that women can do wonders. When we asked her about one thing she would love to share with the world, she said, “What people deem impossible, isn’t! Stop acting out of fear and get out and realize your dreams.”

After Hamsa safely arrived to Nuweiba on the 23rd of December, 2017, she turned out to be already having two other big adventures in mind. The first is a kayaking excursion from Aswan all the way to Damietta with her husband, Nour El Din, who solo cycled Egypt a year ago. Her second big adventure is to follow her husband’s footsteps and solo cycle around the country as well.