If you think you have the coolest BFF in the world, well, you’re wrong because you don’t. In a social media heroic attempt, we found an Egyptian man who has redefined friendship and loyalty. A post went viral and it was for all the right and hilarious reasons. 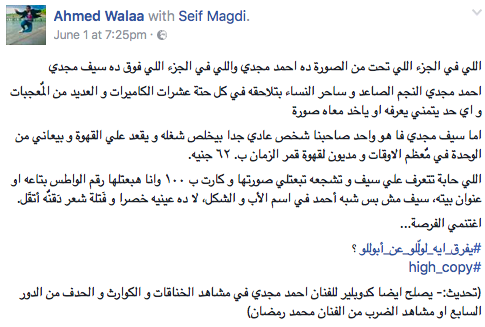 Ahmed Walaa posted a collage of his bearded friend, Seif Magdy, and Egyptian actor, Ahmed Magdy, claiming that they are almost the same person. The caption described the actor as an uprising star, who is chased by women everywhere. His friend, on the other hand, works a normal job, loves cafes, feels lonely most of the time and owes Amar El Zaman cafe EGP 62.

All Walaa needs is a photo of the interested girls and an EGP 100 phone scratch card, in exchange for Magdy’s phone number. The loyal friend added that his BFF has green eyes and a thicker beard.

What has your best friend ever done for you?

WE SAID THIS: The Internet is a fabulous place.