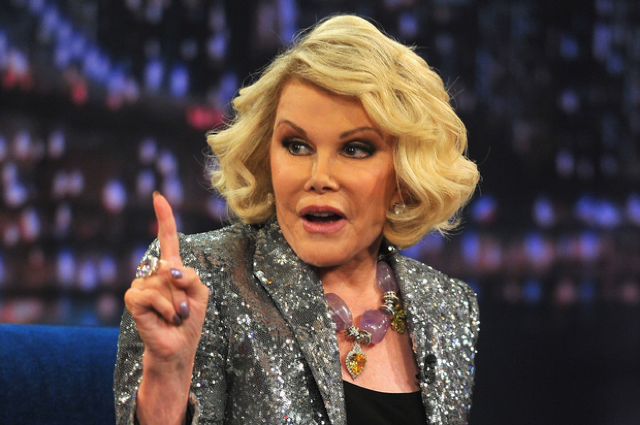 Between people like Sean Hannity, Glenn Beck and Joan Rivers, I’m starting to wonder whether having hate-filled ignorance on your resume is a requirement to be on television these days.

I’m constantly in awe of how these belligerent and seemingly uneducated personalities are allowed to have their own shows. They’re given a platform to millions and millions of people, and they use it to arrogantly spread hate.

Joan Rivers recently stated that she thinks the Palestinian people deserve to die. Why? Besides the fact that she is a gung-ho Israeli supporter, she claims “they” started it and were told to evacuate.

Tell me, Joan, where should they have gone? Into the sea? I’m assuming the geographical location and inhumane barriers of Gaza are a mere technicality here. Moreover, I’m assuming you actually meant Hamas when you blamed “they”. The Palestinian people are not Hamas. And “they” (Hamas) didn’t technically start anything.

Hamas did not kidnap the three Israeli teens. If you want to go one step further, Israel technically started it when they stole Palestine in ’48, massacring, displacing and oppressing an entire race – but let’s not go down that road. If you’re going to publicly support genocide, at least be familiar with the facts.

You not only justified the death of innocent civilians, but actually had the audacity to say they deserved it. Man, and I thought you were a witch when you called Adele fat. You’re saying the 400+ dead children deserve it? The refugees that slept in the UN camp that Israel told them to go – and then bombed it – deserve it?

I guess it’s only fitting that a woman who has made a career out of insulting others could wish something so heartless upon innocent families.

I don’t understand how E! has allowed such a vile woman to stay on air. I mean, you found a way to tear down one the greatest musicians of our time, over and over again. Adele is talented, hard working and honest, yet she was insulted, multiple times, for being “fat” by the same woman who is so insecure that she would rather disfigure her own face than age gracefully.

This Thursday in Jeddah, KAUST is set to Return with its Annual…

What is wrong with you, woman?

You recently released the following statement on your FB page:

“I am both saddened and disappointed that my statement about the tragedy of civilian casualties was totally taken out of context. What I said and stand behind is, war is hell and unfortunately civilians are victims of political conflicts. We, The United States, certainly know this as 69 years later we still feel the guilt of Hiroshima and Nagasaki. The media, as usual, has decided to only quote the most out of context and inflammatory non sequitur rather than giving an accurate account of what my intentions were behind the statement. Along with every other sane person in this world, I am praying for peace. It is stupid and wrong and I am tired of bearing the brunt of attacks by people who want to sell newspapers or gain ratings by creating a scandal about me that is non-existent.”

No. I call bullshit. It’s on video for crying out loud. You do not get to blame the media for this. You have made a career out of ripping others to shreds. You live a life of luxury paid for with hurtful words and the scandals of others.

While I secretly wish E! would come to its senses and let you go, the cause needs people like you. There is no light without darkness, and there is no good without bad. You are helping the Palestinian cause with your despicableness.

With that I leave you with a prayer: I pray that you find peace. I pray that whatever microscopic good is left somewhere deep down in you fights its way through all that ugly hatred. I hope you forgive yourself someday for the horrid things that you’ve said about others; tearing them down and poking fun from the comfort of your studio and behind your cameras.

I pray that you live out the rest of your days gracefully, because lady, everyone gets a second chance in life and you’re running out of time. And most importantly, I pray you meet a Palestinian one day and learn from the strength, courage and honor that they possess – qualities that I am sure are completely foreign to you.

WE SAID THIS: Anyone Interested in Palestine or the Holocaust Should Read this Book.