Tinder in Egypt – AKA Three Left Swipes and You’re Depressed 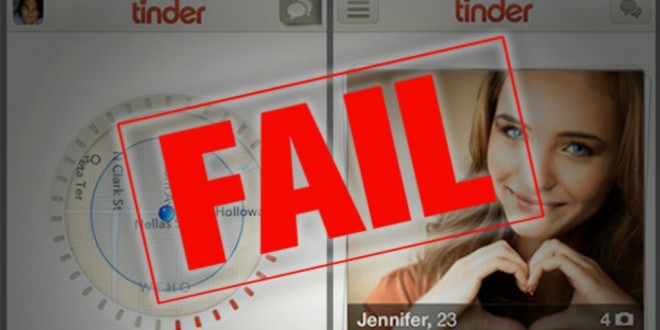 This article is about Tinder in Egypt or, as I like to call it, “There’s No One New Around You.” Or, perhaps, we should call it “Three Left Swipes and You’re Depressed.”

Sure, Tinder doesn’t fall into our notions of a fairy tale love story – what would have happened if Cinderella “swiped” Prince Charming to the left because she didn’t like his mirror selfie?

But Tinder sometimes works… in other countries. Egyptian Tinder, however, is a farce. The Tinder dating pool in Egypt is about as shallow as a rain puddle in the middle of a Sahara summer.

That means “non-existent” for you folks who aren’t great with metaphors or with a limited knowledge of temperature cycles in geographic regions.

That’s not to say that people, themselves, are shallow. In fact, from what I’ve noticed, the women here seem to rarely care about looks. I’ve never seen so many great looking girls marrying so many less-than-great looking men as in Egypt. 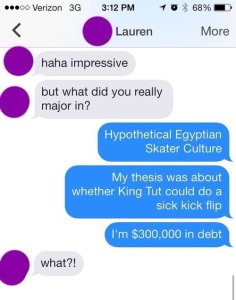 I’m not judging their decisions – after all, I’ve lived in some of the most physically superficial cities in the world and people aren’t much happier, but the lack of physical compatibility makes Tinder virtually worthless in Egypt. This is an app that relies solely on looks!

One clear indication of how Egyptians have no idea how to use Tinder is the number of profiles that simply have a picture of a teddy bear or a postcard with some clever quote written on it.

“Wow, she totally used a quote from the Dalai Lama superimposed on an adorable picture of a puppy. Maybe we’re soul mates!”

Tinder is not meant to be modest! It was meant to skip the most difficult step of any introduction between two people who may want to pursue a relationship and answers the question, “Do you find me attractive?”

Days, months and sometimes years are spent trying to skirt that question in non-embarrassing ways. Tinder solves that question with the flick of a finger and we, in Egypt, haven’t figured that out yet.

And, for the record, one photo isn’t enough! Even Chewbacca probably has one pic where the lighting and angle makes him look like Ryan Gosling. Include a full-body shot, too, even if you hate your body, because the look of disappointment in that person’s eyes when you meet will be more painful than not matching.

And for women here, for whom looks may come secondary to other attributes, it seems that Egyptians should just create their own Tinder to be used solely by parents trying to set their children up.

All the girls have pictures and all the guys have the family name and job title. “Ah, from a good family and financially secure. Swipe right. Ooh, Hamida, we have a match!” 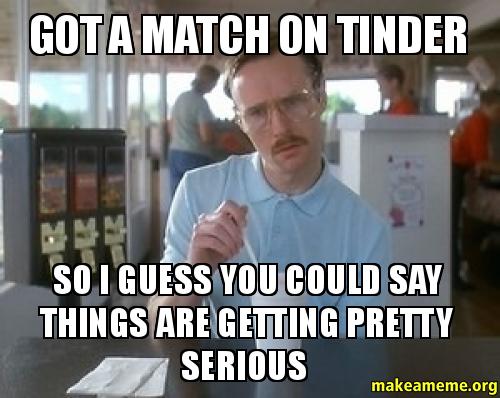 But let’s be clear: Egyptian Tinder isn’t just a problem because it focuses on looks or social status.

Distance is a huge obstacle in Cairo as well. I live in Zamalek and meeting a girl in Mohandeseen for coffee at the wrong time of day can take approximately four lunar cycles. Forget 6th of October or New Cairo, I may as well date a girl in Johannesburg or the moon.

As a result, I set my distance to the Tinder minimum, one mile, and pray my soul mate lives on the same side of the Nile as me.

Furthermore, in most countries, I go on Tinder and if someone has mutual friends, then I know it could be a good match. In Egypt, if we have mutual friends, it means that any date will be the subject of gossip, expectations and a swirl of rumors that can destroy even a solid foundation.

In Cairo, if I see we have mutual friends, I immediately disregard that person and try to find someone with no common friends, a foreign name, or a description of “just visiting for the week.”

Yes, it’ll be fleeting, but at least if it doesn’t go well I won’t have to figure out which of our common friends will still be my friends when it’s over.

Lastly, in the USA, as in Europe, it’s okay to tell someone you “met on Tinder.”

Here, it would be the equivalent of saying, “We shared the same Ebola quarantine tent.”

The concept of “reputation” is still alive and well here. “Hooking up” happens, but like so many vices here, are kept quiet in the name of propriety. Here, people seem to get engaged 17 times just to give the appearance that their flings are legitimate.

To me, that almost seems more egregious – pretending love instead of admitting lust. At least Tinder is honest and, sometimes, true romance can truly spring from the superficial to the genuine. I know married couples that met on Tinder and tout it proudly.

Let’s be clear: Not everyone needs Tinder. I have no doubt that true love can also happen from the inside out, without the initial requirement of physical attraction, much like Belle’s love in Beauty and the Beast.

But, let’s face it, we were all really happy when he morphed into a handsome prince. Because, lest we forget, a royal prince with his own kingdom is “from a good family and financially secure.”