Every parent is currently living their worst nightmare which is an Internet Suicide game. While we thought the viral trend died with the disappearance of the Blue Whale game, the Momo Challenge is terrifying parents around the world.

This month, a Facebook post went viral by a mother claiming that a doll named Momo appears in the middle of a Peppa Pig episode and encourages children and teens to perform dangerous and violent acts including suicide. This story has been circulating since 2018 and just resurfaced this month. Despite several media reports establishing a relationship between the Momo Challenge and a suicide case, no link has been confirmed by the authorities.

Canadian police has even asked people not to use the phone number provided in the WhatsApp messages and to send screenshots of their phones to police authorities. After continuous monitoring of the phenomenon, they could not confirm any actual victims.

Jill Murphy, Vice President and Editor-in-Chief of Common Sense Media, told CNN that the Momo Challenge preys on parents’ fears about how social media platforms regulate content. “So this has been around for a while. And the reason that it’s probably getting the kind of scrutiny and attention that it’s getting is because of its appearance in younger kids’ content,” she added. “And because of that, and because of the accessibility, coupled with the frustration for parents, I think it’s just a fever pitch of, ‘Here’s one more thing that YouTube is exposing kids to’ and not taking any accountability around.” 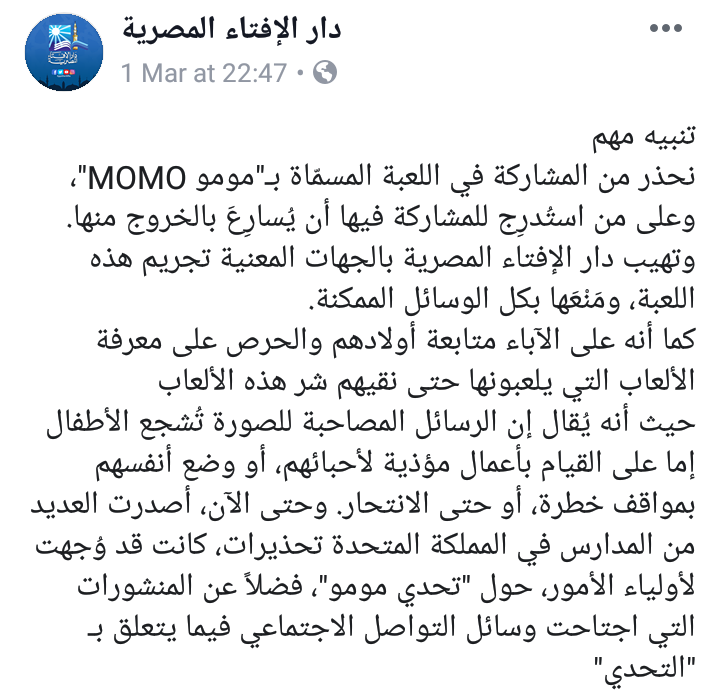 Even though multiple sources claim that it’s a hoax targeting parents, with little evidence that it ever existed, parents are panicking across Egypt and you can never be too safe around your children. Dar Al-Ifta had to release a statement banning the game and urged parents to monitor their children’s Internet use. The establishment further explained that multiple schools in the UK have warned parents against the Momo challenge.

Whether it is a hoax or not, the Internet is full of inappropriate and violent content that shows up on your screens when you least expect it. So, monitoring Internet use is a must!