Charlie Hebdo: How Far Is Too Far?

By Scoop Team On Jan 17, 2016
A man holds a drawing of drowned Syrian boy Alan Kurdi as a tribute during a protest for refugee rights. (Osman Orsal/Reuters)
Tweet
Share
Share
Pin 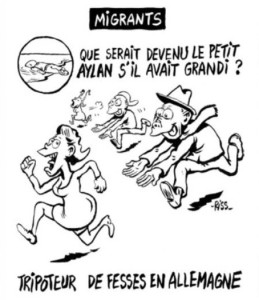 The French satirical magazine Charlie Hebdo has done it again and last week published a cartoon that claimed Alan Kurdi, the three-year-old Syrian boy who washed up on the shores of the Mediterranean Sea after drowning trying to flee his war-torn home, would have grown up to be a perverted “groper” in Germany.

This is the magazine’s reaction to the recent allegations that refugees were involved in mass sexual assaults in Cologne and other European cities during New Year’s Eve. Not even trying to hide their misplaced resentment against all Arabs and Muslims after the 2015 terrorist attacks against their offices, the magazine has turned the tragic death of a child into something people should be thankful for because they claim he would’ve been a pervert.

Despite the recent anti-Muslim and anti-Arab rhetoric all over Europe and the U.S., people have shown great anger and disapproval towards the magazine and called out the publication of the cartoon for the horrendous act that it is. This is not a matter of terrorism or religion, this is a matter of racism.

We live in a globalized world and one would think that greater access to one another would facilitate popular acceptance of different ethnicities, religions and cultures, but this sadly is not the case and will not be as long as media outlets such as Charlie Hebdo continue to use this “us” vs. “them” discourse.

While Muslims from all over the world have taken to social media trying to explain that their religion is one of peace and while Arabs everywhere are proclaiming that #ArabLivesMatter, this racist French magazine is spreading ignorance and hate. 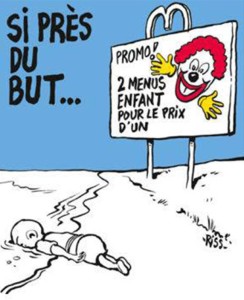 This was certainly not the first time the magazine has used Alan’s picture to give its readers a laugh; Charlie Hebdo has been using his death in cartoons for months now and despite the negative reactions, no one is really doing anything about it. But let’s face it: Freedom of speech only goes so far. There are questions of responsibility as a media entity — and of, you know, basic human decency — that complicate the claim of freedom of expression.

Syria’s tragic revolution has become a global issue whose consequences must be faced by humanity as a whole. Despite the heartwarming examples of kindness that we’ve seen from most Europeans, it’s infuriating to see reactions like Charlie Hebdo‘s, which only provoke anti-Western sentiments.

Even though the terrorist attacks against the Charlie Hebdo offices were atrocious and should be condemned worldwide, Western hypocrisy cannot be overlooked when it comes to this latest offensive image. Ever since the 2011 Arab Spring, Libya, Syria and Iraq have been facing crises and citizens are being slaughtered; while much of the West has turned a blind eye to it for some time, actions like Charlie Hebdo‘s are also fanning the flames of extremism.

And while the West is upheld as a model for democratic ideals where tolerance flourishes, it is still clearly also a hotbed for racism, Islamophobia and hatred against the Other.

WE SAID THIS: Don’t miss Why Charlie Hebdo Is Unlike Anything Else We’ve Ever Seen.