What Hillary Clinton as U.S. President Would Mean for Egypt 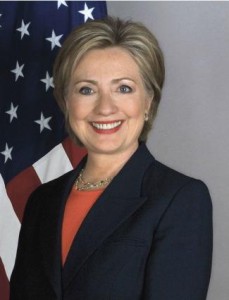 Clinton laid out her foreign policy strategy pretty plainly in her newly released political memoir, Hard Choices, and appropriate to her character, she went right to the point: “America will always do what it takes to keep our people safe and advance our core interests… Sometimes that means working with partners with whom we have deep disagreements.”

In short, if Hillary Clinton were to be elected U.S. President in 2016, her policy toward Egypt would probably not be much different than that of previous administrations. However, her experiences with Egypt during her incumbency as Obama’s Secretary of State may deter her from any attempt at a PR campaign.

1. Clinton is a realist to the bone. As she stated in her book, she is willing to work with the strongest government capable of advancing U.S. interests, regardless of ideological differences. 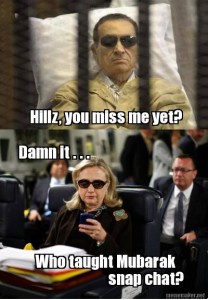 In Egypt, the United States values stability more than anything. This has been demonstrated over and over again, during the Mubarak era, throughout the revolution and under the military regime. As long as the government is stable and cooperative with U.S. bidding, Clinton will look the other way even in the face of most human rights violations.

Unless, of course, the violation is so publicly overt that she has no choice but to respond, such as the case of the Rabaa massacre in August 2013 (which ultimately ended with the cancelation of joint U.S.- Egypt military exercises and the suspension of significant military aid).

Why is stability so important? Because in order to advance its interests, the U.S. needs a stable, predictable and reliable government that is powerful enough to control its people and deliver on its promises. Traditionally, the Egyptian leaders who have proven most capable of maintaining stability have come from the military establishment: Gamel-Abdel Nasser, Anwar Sadat, Hosni Mubarak and Abdel Fattah Sisi.

After President Mohamed Morsi of the Muslim Brotherhood’s Freedom and Justice Party was democratically elected into office in 2012, the U.S. responded with its full support and financial assistance simply because it could trust the Egyptian military to keep things stable. Even after Morsi’s clear power grab, giving himself extensive Constitutional powers in late 2012, the U.S. reacted merely with a slap on the wrist.

2. Clinton was a staunch supporter of deposed president Hosni Mubarak and she was initially opposed to Egypt’s 2011 revolution. 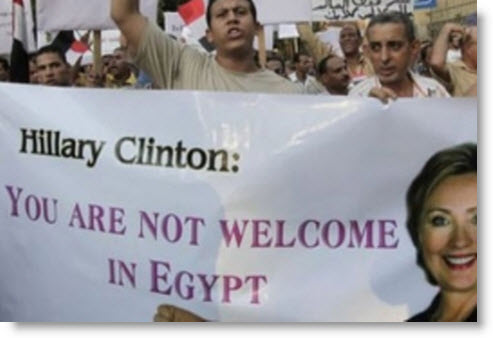 At the beginning of the 2011 revolution, as Obama’s Secretary of State, Clinton described the Mubarak regime as “stable” and a “longtime partner” of the United States. She advised the Obama administration against preemptively supporting the revolution at risk of damaging relations with the dictator of 31 years.

It wasn’t until it became clear that the revolution could only end with the resignation of Mubarak that Clinton finally went on record urging a “transition to a democratic regime”.

To be fair, she was more swift to change her position than most other Congressional leaders in the U.S. But because of her high profile position as Secretary of State at the time, she was the one at the receiving end of most criticism and anti-US conspiracy theories circulating among Egypt’s youth.

1. Clinton won’t make much effort to improve the U.S.’s image among Egyptians, as Obama attempted to do with his speech at Cairo University in 2008. Her attitude suggests disillusionment with the U.S.’s seeming inability to please any segment of Egyptian society. 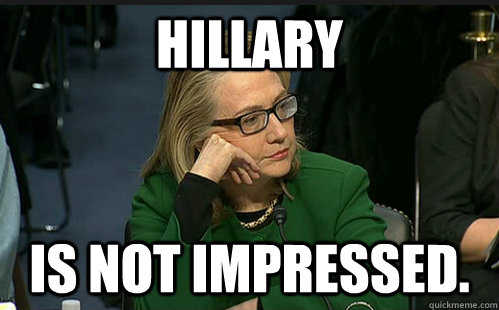 In her newly released political memoir, Hard Choices, Clinton suggests that she is impatient with Egypt’s culture of conspiracy theories. She expresses her frustration with the contradictory narratives directed against the U.S., post-revolution: “Supporters of the Muslim Brotherhood accused us of having propped up the Mubarak regime and suspected that we would collude with the military to keep them from power.”

At the same time, non-Islamists “feared the prospect of Islamist rule and alleged that the United States had conspired with the Brotherhood to force Mubarak out.”

After meeting with activists at Cairo’s Four Seasons Hotel in 2011, Hillary described how the group  “argued among themselves, blamed the United States for a variety of sins, and were largely dismissive of electoral politics.”

2. Based on her service as Secretary of State, Clinton’s policies will be more interventionist than Obama’s.

When it comes to interventionism, Clinton will probably be to the right of Obama but still far to the left of Republican leaders.

As Secretary of State, Clinton rallied in favor of offering “substantial and immediate aid” to the Syrian rebels during Syria’s civil war. Obama vetoed this plan because he did not want another Middle East intervention (also citing the potential misuse of training funds and possible defections to enemy groups, which has happened in Iraq and Afghanistan).

Clinton was also at the forefront of U.S. officials fighting to see Libyan dictator Moammar Gadhafi removed from power in 2011. In 2008, she threatened Iran with a “retaliatory nuclear attack” if its leaders were to nuke Israel.

Overall, Clinton has taken a fairly measured stance toward intervention and is far from a war monger (she was opposed to sending infantry to Iraq to fight ISIS and has consistently been opposed to the U.S. war in Afghanistan), unlike her Republican counterparts. Egypt can expect the status quo under Clinton, but at least she will feign a respectful distance.

WE SAID THIS: Check out “12 Things You Need to Know about ISIS”.