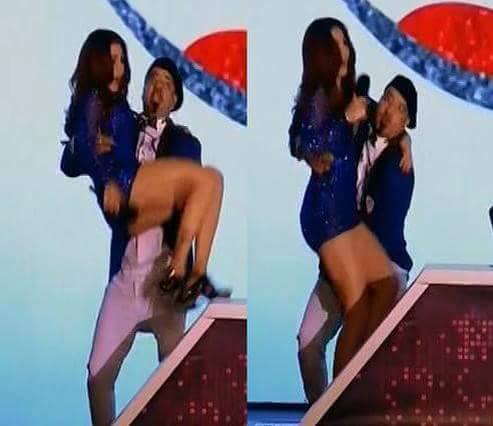 Last night, MBC Masr finally premiered its long-awaited TV show Wesh ElSa3d hosted by Egyptian comedy actor Mohamed Sa3d. The show’s first guest was singer and actress Haifa Wahbe and that’s when things got out of control. The jokes were not funny, Sa3d kept on flirting, which sounded like borderline misogynistic harassment, and the whole show revolved around him not having control over himself in front of her. It was a humour-less disaster by all means.

MBC Masr asked for viewers’ feedback and everyone seemed to have the same opinion: What’s so funny about sexual innuendos and where is Egypt’s favorite comedian’s sense of humor? People are already asking the channel to suspend the show due to having more offensive content than Bassem Youssef’s and Abla Fahita’s shows.

Enraged viewers expect this kind of profanity and sexual objectification of a female in a Sobky movie, not on Friday’s late-night comedy TV show, especially when sexual harassment is a serious ordeal in Egypt. The last thing we need is to add humor and belittle it. We hope this was a one-time thing and for better content and script writing on the next episode.