One of the biggest challenges for parents in Egypt is finding a school that will accept all sorts of behavioral and learning difficulties. It takes years of accepting that their children might have a problem, parents struggle emotionally and financially, not to mention the child’s challenges as well. It is war having a child with any kind of disability in Egypt, be it ADHD, Autism, ADD, Down syndrome, dyslexia, etc.

Along came Reham Saeed last year and opened a school for special needs children, and every struggling parent applied hoping that their ordeals will finally come to an end, but as usual Saeed brought nothing but disappointment.

A mother posted on Facebook her experience with the school and it is heartbreaking. Apparently, the school accepted her child and he spent a year there, the mother noticed major improvement and was extremely satisfied. However, after the show Sabaya ElKheir was suspended, parents were advised to protest for the sake of their children.

A week after the show started airing again, Saeed taped an episode with the kids and the school basically told parents the kids will be taking some time off, only to realize that the school will only accept learning difficulties cases and her autistic child will not re-join them.

The thing about children that are on the autism spectrum is that they are obsessed with routine, it’s very difficult to get them to accept change and according to the mother the child literally sleeps holding his school bag. 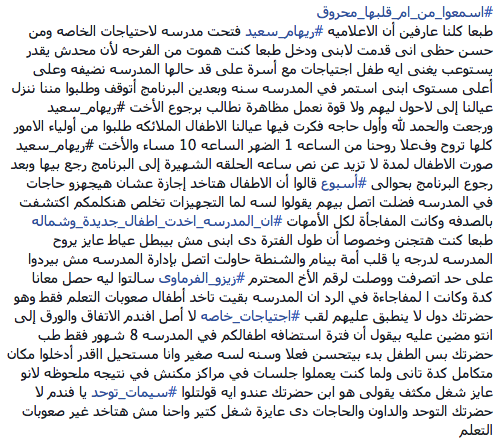 Reham Saeed, I promised myself I would never intentionally hurt anyone online, but you are a disgrace to humanity. You continue to destroy people’s lives out of selfishness and for ratings. Shame on ElNahar TV for supporting and sponsoring a disgusting human being as yourself.

WE SAID THIS: Don’t miss An Open Letter to Reham Saeed.