Five years ago this week, a country with one of the richest heritages in the wold was struck by more than just tragedy. A nation with ancient and religious roots that were celebrated across a diverse community of mixed minorities became divided by political, religious and violent means.

Since 2011, an estimated nine million Syrians have become internally displaced, with an estimated three million alone scattered across the neighboring countries of Lebanon, Jordan, Iraq and Turkey. A population that was once striving with patriotic pride is now struggling to cope with the ongoing aftermath of the war while grappling to find means of survival in hostile foreign territories.

The United Nations High Commissioner for Refugees (UNHCR) has declared the Syrian refugee crisis the “single largest driver of displacement in history.” 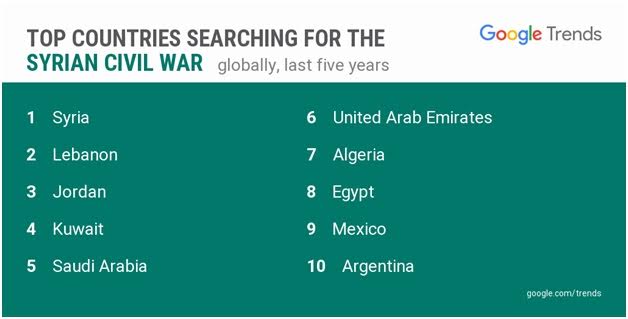 Having such a massive impact on migration, many abroad have taken to Google to learn more about the Syrian conflict and the refugee crisis. The top three countries searching about the war in Syria (1. Syria, 2. Lebanon and 3. Jordan) are the countries hosting the largest population of internally and externally displaced Syrians. They are followed by other Arab nations (4. Kuwait, 5. Saudi Arabia, 6. UAE, 7. Algeria and 8. Egypt) that are home to a pre-war Syrian population. Latin America surpasses both North America and Europe, with Mexico and Argentina being the ninth and tenth countries to take a keen interest in the Syrian war. 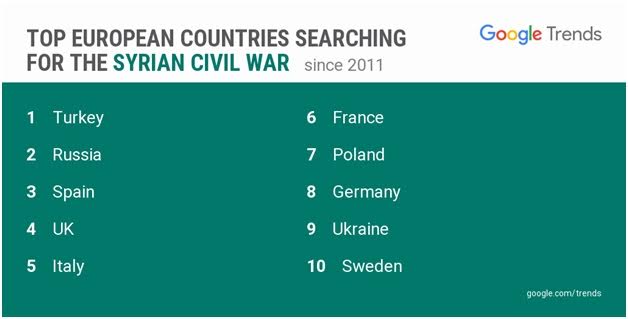 While Europe is constantly at the forefront of headlines for the Syrian refugee criss, whether it’s for it’s xenophobic attitudes or its heartwarming hospitality, the search patterns for European countries are unusual. It seems instinctual for populations in Turkey and Russia to be the top two European countries to search about the war in Syria, since both governments and armed forces played a role in the war. Oddly enough, Spain ranked as the third European country searching the most, above the UK (number five), France (number six) and Greece, which didn’t make it to the top 10. 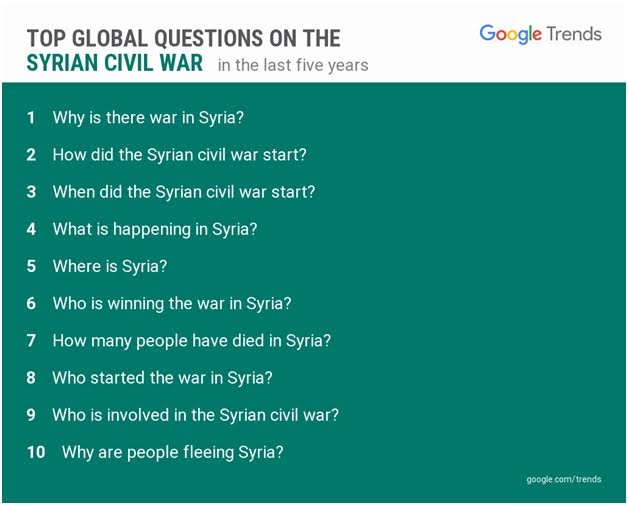 Should we be worried that people are asking questions about Syria that should be common knowledge or should we be grateful that oblivious non-Arabs are even taking interest in the crisis? Are people searching because they want to educate themselves and ultimately help those suffering or are these questions coming from an internal xenophobic fear?

Let us know your thoughts.