Excuse me, Prime Minister Ibrahim Mahlab, but I don’t buy for one second that you were remotely surprised by the horrific state of the medical premises in Egypt, for any citizen over 30 years old must have encountered the so-called sterile green rooms once or twice.

Fourteen years ago, I came face to face with something similar to a public hospital for the first time. It was my second year in college and the anatomy class was held at the medical school’s morgue at Ain Shams University. The things you witness around the dead bodies, the way the class is handled and the hygiene is the first day every Egyptian doctor loses part of their humanity and grasps the fact that their career choice might have been a mistake.

Five years later, doctors find themselves drained psychologically and mentally. They realize the fight of their lives was easier for those privileged with the right family members; nothing about grades is fair game, the fine line between right and wrong is long gone and they question everyone’s morals, sometimes even their own. Yet somehow, physicians still have hope that private practices will be less corrupt.

15 years later, you finish your master’s degree and work in the National Heart Institute under the same conditions that you have been brainwashed into perceiving as the only thing the country can afford, with hundreds of patients and total chaos, only to be stunned by the Prime Minister showing up unannounced and blaming you for the disgusting state that is nothing but a compilation of everything that is wrong with the entire system. The reason why I think this is one of the worst things that could happen to Egyptians is because doctors are yet again thrown under the wheel. Not only do they work in the most inhumane conditions that could easily transmit numerous diseases, but they’re unappreciated on so many levels, are ridiculously underpaid and no matter how much they strike to increase health care funding from the current 3.5 percent to 15 percent of GDP, their humble demands are ignored.

Without a doubt, negligence is no stranger to countless doctors in Egypt. There have been innumerable accidents in the best private practices in the country. However, those doctors were not the ones found at fault during the official visits. I can’t help but notice a repetition in the sense of, “Let’s fire a couple of hospital managers, doctors, nurses, maybe a minister resigns and get the media to talk about it so Egyptians think we actually care about fixing this mess”.

Now, the bright side about putting our country under the international spotlight is the peer pressure of this scandal. Only days ago, a Facebook page was created anonymously by enraged doctors, exposing the true nature of the working conditions in Egypt’s health care system. The page already has 262,000 followers and the syndicate board has announced its support.

Media websites such as BBC and Buzzfeed are already sharing the photos. The PM’s little hospital visit charade backfired big time and that is the power of social media. 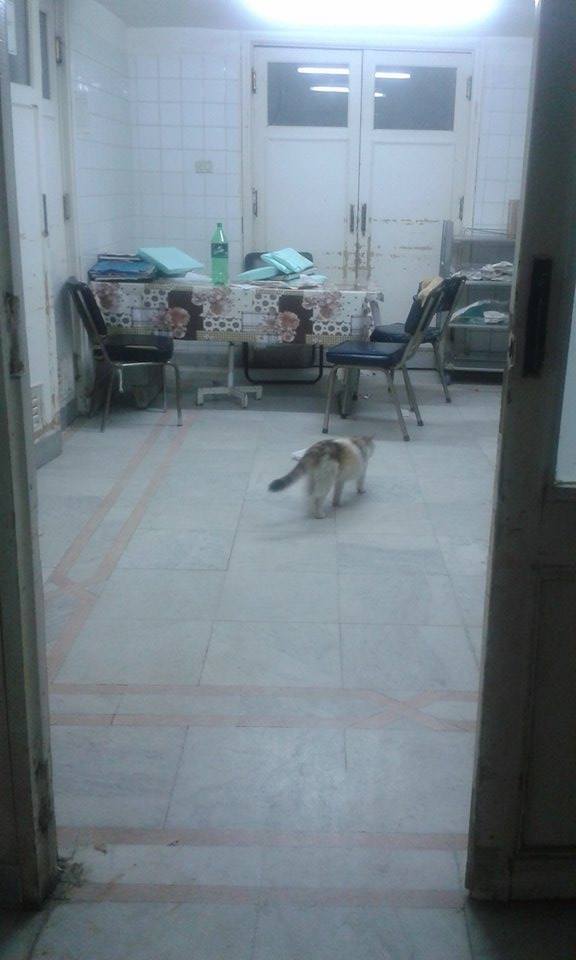 The most frustrating thing about these photos is that it is a matter of hygiene, not how advanced the facilities are. A simple bucket of water, soap, disinfectant and clean sheets would end this mayhem, yet the carelessness we find in hospitals is disturbing. Every hospital member needs to get a grip, because we ended up fearing treatment in our country more than living with a disease.

If a scandal at such magnitude does not urge the country to change the way things are managed, then I believe we are doomed for eternity. Everyone believes it is hopeless and things will never change because we – as citizens – are the ones to blame. Some even say that even if every hospital is spotless, only months later everything will be back to its horrendous state, blaming it on our “nature” and “culture”.

I refuse to believe that we will always be numb to the sight of dirt. It is true, we don’t understand the meaning of discipline or consequences, and to be honest this will take years to handle, but there is hope.

I can’t help but feel a new revolution is on the rise within the medical field. Hats off to the founders of this incredible page.

WE SAID THIS: Don’t miss Nightmare at the Nile Badrawy Hospital and Private Hospitals in Egypt.