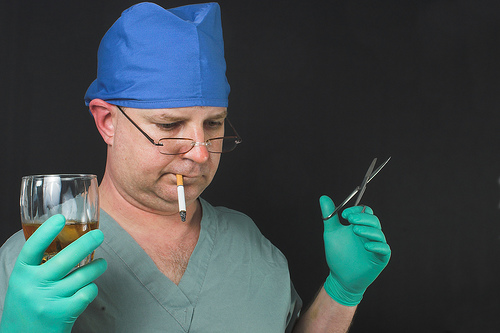 Is it a hospital? A clinic? A day care center? An apartment? Maybe it’s a butcher house?

Would you send your pet there? I’d rather not.

Having slaved at one of Egypt’s largest private healthcare institutions, my sharp observations led me to the conclusion that the public is clueless about health care. We are aware that our system is f***ed, but do we notice the little glitches? The little details one may fix? Do we dig deeper to the root of it? Is it a highly expensive hospital that comforts our fears of malpractice? Or is it a nice painting on the wall that decides where you give birth? Or a handsome flirty doctor? Meh.

It’s not all Grey’s Anatomy, I tell you.

I will not discuss health care as a whole, or the entire healthcare sector in this country where the word “health” seems to be the least defining adjective. I will start with the private sector, where millions are spent, more are made, and gallons of blood are spilled.

Most of us go to family doctors or friends, just like any other business, thinking they have our best interest. But is it the doctor that defines where you need to be treated? Can doctors be trusted to begin with? Most certainly my answer would be negative, but here goes why.

Let me start by throwing a nice ticking bomb here: “the commission scheme”, or scam rather, where a doctor recommends a specific lab or clinic or hospital, with which he has a contracted deal to receive a commission out of your own pocket. And I thought health care was a humanitarian thing. You think your uncle recommended the best hospital? Think twice.

Have you ever heard of a patient sliced open when surgery was not necessary? Or when the patient’s condition could not sustain heart surgery? You may want to interview some of the market’s leading heart surgeons, or even better: cancer patients. “Money talks, doctors walk”.

Most private hospitals owned by a doctor, or a collective partnership of doctors, are setup up in residential buildings or adapted in an office space. Almost none have been designed as a hospital in terms of structure and function. Hence, they lack basic medical infrastructure regarding medical gases, HVAC (Ventilation and Air Condition) and MEP (Mechanical Electrical Plumbing) – in simpler words, the gases they attach to machines that go into your nose and body, or the air that you breath that ought to be fresh and sterile.

Most of those hospitals keep low levels of electricity backup systems such as UPS and generators. In one of the most popular hospitals in Heliopolis, my friend complained that her grandmother was suffering in the ICU due to electricity cuts stopping her ventilator and other machinery she depended on. Recently, due to the regular power cuts, the news reported that a surgery was performed under the lights of mobile phones. I will refrain from commenting further. 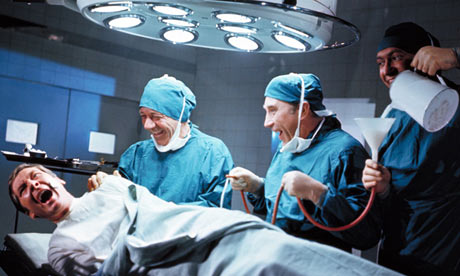 Hospitals do not respect proper circulation and evacuation standards, while emergency exits are often chained due to safety concerns. (You wouldn’t want to be caught in a fire inside a hospital now would you?)

The government recently issued a new design code mandatory for all hospitals in Egypt to keep their licensing. The code is almost an exact copy of the American FGI Standards. And almost none of the hospitals are able to respond to the new Egyptian Health Care Design Code, which covers the very basics of any health care institutions around the world. The new code was supposed to be implemented earlier, however the revolution delayed it. My point here? It is not the new government setting standards for health care (you wish).

Let’s get even more technical shall we? They lack the proper height to install ceiling mounted laminar air flow in operating rooms. Many do not even have fresh air in the ORs and ICUs (operating rooms and intensive care units). What does that tell you? Would you fancy being cut open in a space with the specifications of your living room? I didn’t mention flies wandering around in patient’s rooms, or the cockroaches roaming around the kitchens of the biggest private health care hospitals.

Nurses… now that is a topic on its very own. But to cut things short, the nursing staff is seldom service oriented and will act as tip beggars. Bullying patients and families for money seems to be a part of their job, even in the highest paid hospitals. Good nurses will be invited to join smaller private clinical practices of doctors or to go to the Gulf where salaries are higher and the reputation of this specialty is not looked down upon. (Doctors in Egypt treat nurses quite terribly and a nurse is regarded as inferior, which develops an even larger problem.)

One of the most crucial and shocking points of discussion is the hygiene of staff; a cultural issue hard to address, as nurses and aides face challenges to their personal hygiene (washing of hands, shower, eating habits) and doctors insist on smoking in their private lounges between surgeries.

And hospitals will also suffer from the overall corporate mentality of the country, where among so many other shortcomings, HR policies will be based on bullying the staff, squeezing every penny, to the point where even the expat nurses that are hired to fulfill the needs of service oriented patient care soon quit after having experienced our medieval, slavery-based system.

So, when it comes to selecting a hospital, will you choose it by its looks and the reputation of its doctors? And not so much based on the ability of the building and its staff to perform at their best?

Til very recently, there was a lack of proper regulation of hospitals. And the capacity of this government to enforce the new code remains questionable to say the least. As the public health care, except for the sub-systems of military aid, dwells at levels way below the private ones described above, private hospitals will always prey on the necessity of the population.

And without questioning the sense of mission of some health care entrepreneurs of this country, the fact is that private health care IS a business and without a healthy bottom line it wouldn’t exist. So, until the market, which is all of us, demands that our health be put first, our wallets will be surgically emptied with the cheapest care.