A video went viral last week of an Egyptian expat, living in Kuwait, who got assaulted by five Kuwaiti women in the street. The mother-of-two, Fatma Aziz, was enjoying a day by the beach when a woman on a bicycle, along with four other friends, went out of the bike lane and hit the Egyptian’s best friend’s child.

The accident left the Egyptian woman shaken, but unfortunately, she was not met with kindness. While blaming the driver, the Kuwaiti woman started telling her to stop shouting but ended up beating the mother and that’s when her friends joined in. In the viral video, the Egyptian lady claims that she was kicked all over her body and showed multiple bruises, and added that the women stepped on her face.

The police immediately showed up, but the Kuwaiti girls’ families asked the mother not to file a lawsuit, yet the horrified and insulted Egyptian insisted on letting the law take its course. The Egyptian Ministry of Foreign Affairs announced on its Facebook page that the incident is being investigated in order to protect their citizens in foreign countries. Egyptian Assistant Foreign Minister for Consular Affairs, Ambassador Khaled Rezk, contacted Aziz and the embassy planned a meeting with the family to ensure their safety. 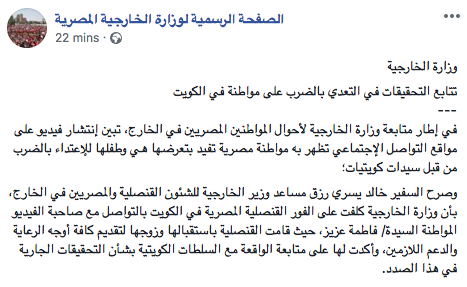 In last night’s episode of Masaa’a DMC, Aziz talked to show host, Iman El-Hasry, and explained all the details with fists clenched in anger.

Recently, a member of the Kuwaiti Parliment, Safaa El-Hashem, made a statement in retort of what the Egyptian Minister of Immigration, Nabila Makram, has stated earlier about the incident. The video has been described by many Egyptians to be “infuriating” and “condescending to Egyptians everywhere in the world”.

WE SAID THIS: The Egyptian Ministry of Foreign Affairs is currently investigating the issue. We sure do hope justice would be served!