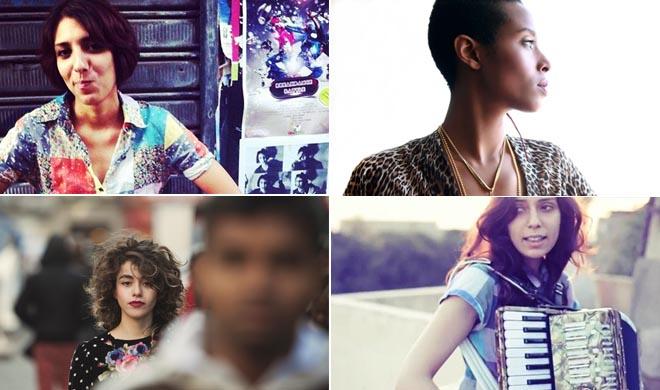 An article released by Your Middle East last week about four female musicians has raised complaints by two of the artists in question, who claim it was published without their consent and “has been written on this subject without our knowledge.”

When El Hawary (bottom right in the collage above) was answering the author’s questions about her personal background and music, she didn’t expect that her interview would be part of an article pairing her in solidarity with Israeli musicians. Neither did Waleed (top left), both of whom claim to have been misled about the article.

“The Middle East has a new generation of female musicians, with novel sounds, voices and a great deal of talent. Your Middle East met four of them to find out how music unites them despite different origins, beliefs and cultures,” the article begins.

The problem is twofold, according to El Hawary and Waleed, who say that they believed the article would be about “female ARAB songwriters” and that they weren’t informed of the full story’s contents and intentions to link Egyptian and Israeli musicians, while the original headline reflects political undertones and an implied association between the artists.

“We – Maii Waleed & Youssra El Hawary – find the title of the published article very specific to a sensitive topic that we did not agree to participate in. The title takes the article to a very different area than that which we were informed by the journalist Alessandra Abbona when she approached each of us individually for an interview,” the girls said in a joint statement.

“(W)e find it very unprofessional of the journalist not to declare the original intentions of her feature. We believe that transparency is the key to respectful journalism and it is certainly unaccepted to include us unwillingly in a topic that we find irrelevant to our point of views,” they stated.

So much for unity. Your Middle East has since changed the headline to just “4 female artists – two Egyptians, two Israelis”, but the fact still remains that at least two of the article’s subjects were misled about the topic, which the writer didn’t fully disclose. It also politicizes an otherwise tame thesis: that music has no boundaries.

If Abbona didn’t share the feature’s full scope with her interviewees because Egyptian-Israeli relations are tense at best, this defeats the entire point of the article, which aims to show common ground amongst female musicians in the region. But that common ground means nothing when it’s seemingly fabricated out of thin air and imposed on unwitting subjects without their knowledge or consent.