Discovering MENA: Should Jews Be Allowed to Pray at Jerusalem’s Al Aqsa Mosque? 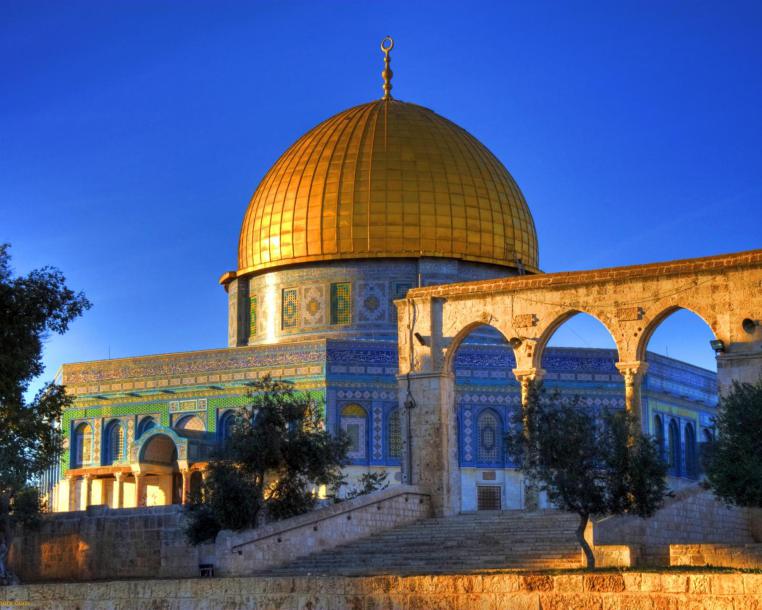 Should Jews be allowed free access to pray at Haram Al-Sharif, the Noble Sanctuary, one of Islam’s holiest sites? The Al-Aqsa Mosque, the third most sacred site in Islam, adjoins the Western Wall and stands on what the Jews insist are the first and second temples.

Haram Al-Sharif has been an exclusively Islamic shrine since the Arab conquest of Palestine in the 7th century AD, but the mosque was built upon the Temple Mount, itself one of Judaism’s most sacred sites. The Western Wall, the only remnant of the Jewish temple destroyed by Herod in AD 70, is under direct Israeli control, and Jewish prayer has always been allowed there. 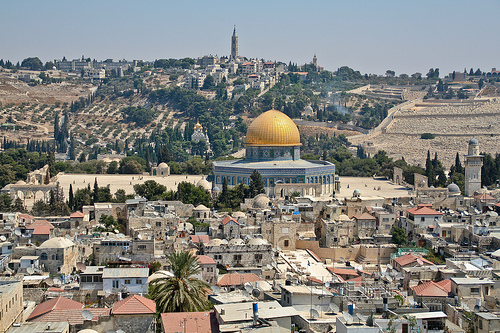 Even Christians revere the site they consider the place where Jesus walked and reasoned with the rabbis and chastised the Pharisees and money changers. The compound has been under factual if not legal Israeli sovereignty since Israel annexed East Jerusalem in 1980 and is the holiest site in Judaism.

That’s not the case of Haram Al-Sharif, which is administered by an Islamic trust under Jordanian authority by virtue of an implicit understanding. This centuries-old religious site is treasured by both groups of believers.

For years, the status quo has been respected by both sides, barring certain extremists (particularly from the Israeli extreme right). But nowadays the apparent calm seems to be facing a new turn of events: The coalition Government of Binyamin Netanyahu, backed by far right parties and settler organisations, are claiming that all Jews should also have access to the Temple Mount, which they affirm is the holiest place for the Jewish religion.

They affirm they are ready to fight for it on the political arena, claiming that a state cannot realise its sovereignty if people can’t pray at sites holy to them. A draft Israeli law granting Jews the right to pray at the al-Aqsa Mosque esplanade (the text would designate “time and space” for Jews wishing to pray there) is being debated in the country’s Parliament, the Knesset. Arab-Israeli MPs were recently ejected from a parliamentary meeting as they vehemently protested against the plan.

But for Sheikh Muhammed Hussein, head of the Supreme Muslim Council which manages the site, “this issue transcends politics. It is greater than politics”. Some Muslim religious leaders even dare to dispute the site’s importance to Judaism: According to Ikrema Sabri, an imam at the al-Aqsa Mosque, “we as Muslims cannot succumb to Jewish myths and whims”. 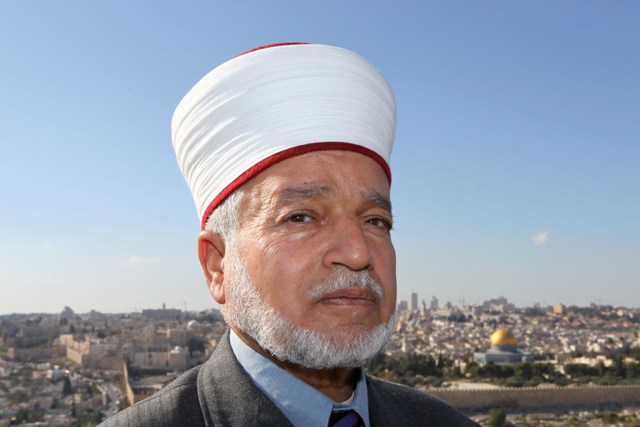 But the whole thing looks unclear, especially because this move could be considered by many as a blunt provocation against Palestinians, for whom any Israeli presence nearby the Holy site is regarded as an incitement. Many even affirm they are ready to defend the place with their lives, and that could lead to massive confrontations and, again, further spilled blood.

In fact, many pundits believe that one of the events that triggered the Second Intifada was former Prime Minister Ariel Sharon (then leader of the opposition) insisting on walking on the site without even pretending to pray. The stated purpose for Sharon’s visit of the compound was indeed to assert the right of all Israelis to visit Temple Mount. 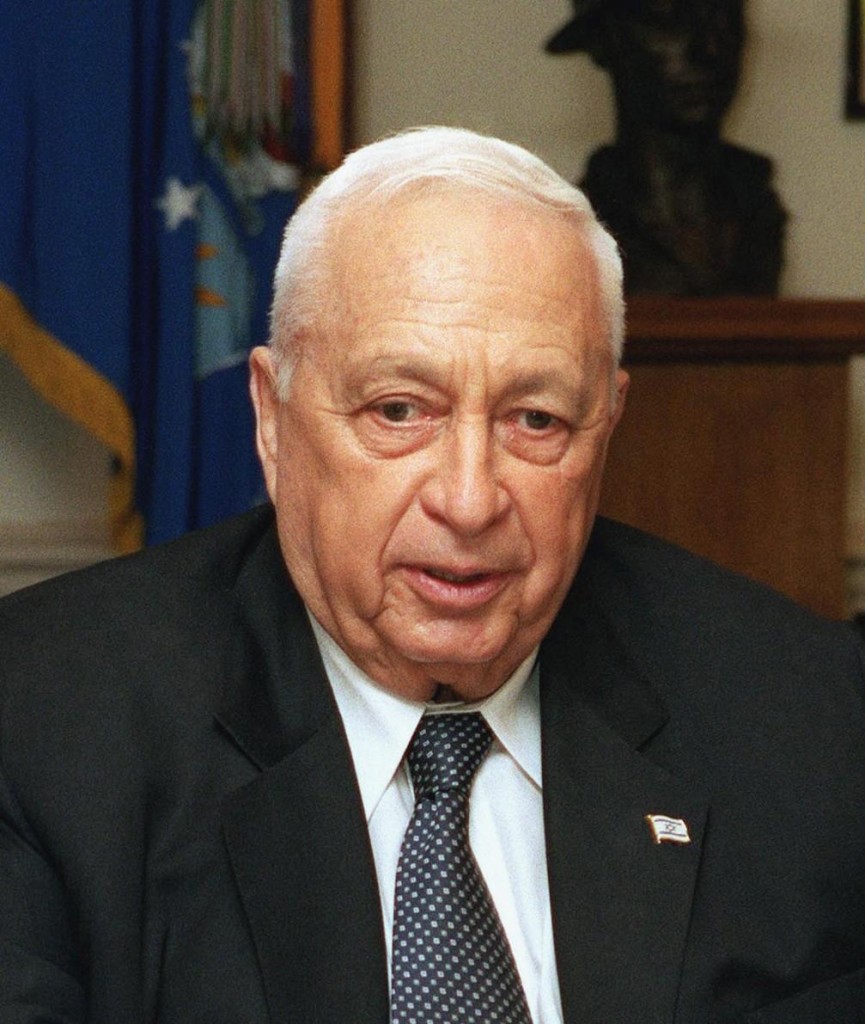 The Palestinians condemned Sharon’s visit to the site as a provocation and an incursion and, shortly after he left the site, angry demonstrations by Palestinian Jerusalemites outside erupted into rioting. The uprising led to the breakdown of peace negotiations and the reoccupation by Israel of territory under the control of the Palestinian Authority.

Since the Israeli army occupied Jerusalem in 1967, the site has borne witness to several provocative events. In 1969, an Australian Christian-Zionist named Denis Michael Rohan torched the mosque’s exquisite pulpit, which was put in place by Saladin upon retaking Jerusalem from the Crusaders in 1187.

In 1982, Alan Goodman — a Jewish American Israeli soldier — fired an automatic rifle at Muslim worshipers in the Dome of the Rock, killing two and wounding 11.

Last September, Israeli troops forcibly entered the al-Aqsa mosque compound and deployed heavily around the entrances, preventing Palestinian worshipers from accessing the area. Meanwhile, a group of ultra-orthodox Jews were allowed entry to the area. Dozens of Palestinian worshipers who were in the mosque hurled stones at the group, before being chased by Israeli forces.

The Chief Rabbinate in Israel, by virtue of halacha or Jewish religious law, strictly prohibited Jews from praying or even walking in the area years ago, for fear they would profane the “Holy of Holies” the inner sanctum of the Second Temple, whose location is unknown. Instead, religious Jews are supposed to venerate the site but not to visit it or seek to possess it in any way. They now seems to have somewhat relaxed their prohibitions. Indeed, some extremist Jews nowadays ignore the body’s official instructions.

The Israeli Supreme Court has refused to rule, insisting that the corresponding permission should be granted by a security authority. In fact, many security forces actually believe that changing the status quo now would spark massive religious and political unrest. An unrest that has been running deep for Palestinian throughout the years, who are astonished at the ease with which Jews can access sites in and around Jerusalem, while the city is off-limits to the vast majority of Palestinians.

In fact, only a small proportion of Palestinians can reach the mosque. Palestinians in the West Bank and Gaza cannot get past Israel’s separation wall, and the 1.5 million Palestinians in Israel and Jerusalem are finding it harder to pray there.

Commentators are afraid that certain Israelis figures are just attempting to provoke violence in order to get out of the peace talks sponsored by the U.S. and blame the Palestinians for the derail, even though until a few weeks ago, most Israeli and Palestinian pundits dismissed the possibility of a Palestinian uprising in the near future. The truth is that these premises have for years been both a place of worship and a place of confrontation.

Palestinian worries about Israeli intentions towards the site are not without foundation, as they have been reflected on the ground, in the country’s efforts to reshape the very geography of the city. It began with the razing of a Muslim neighbourhood next to the Western Wall, replaced by a prayer plaza. 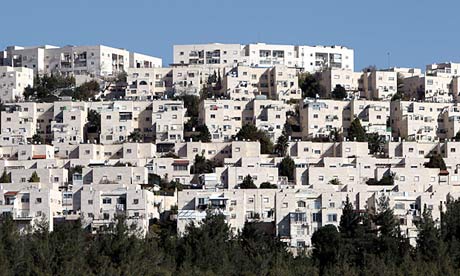 Next came the building of Jewish settlements separating East Jerusalem from the West Bank. Jewish settlers have also been confiscating and buying Palestinian homes in the Old City’s Muslim Quarter. Jordan has repeatedly criticized Israeli archaeological works in the Quarter and near the foundations of Al-Aqsa mosque.

Many Palestinians are afraid that history will repeat itself, pointing to the division of the Ibrahimi mosque in Hebron, which is now divided into two parts and is visited by believers in a time-sharing system. The mosque grounds are supposed to be kept open exclusively for Jews and Muslims for 10 days a year each, during their important holidays, but last Ramadan Israelis violated that regulation and cut short the Palestinian Islamic presence at their own mosque.