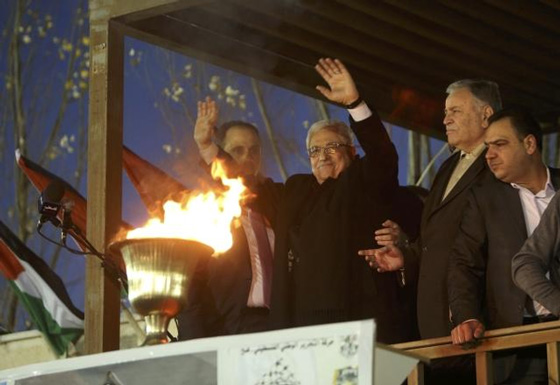 When Hamas celebrated its 25th anniversary in Gaza back in December, several rallies were also authorized and held for the first time in years in the West Bank, sparking (again) rumours about an eventual badly needed Palestinian reconciliation. This type of comments are again all over the media on the occasion of the (first-time since Hamas came to power) holding of another rally, this time a Fatah rally in Gaza, marking the 48th anniversary of the founding of the rival political movement by Arafat, celebrated with a sea of yellow banners, T-shirts and flags (some of them shyly hung on Gazan windows over the last years). The event featured participating members of Hamas, but it was the delegation having crossed the Rafah border crossing that attracted all the attention, mainly composed of Abu Ali (nom de guerre Abdul Aziz Shahen) historical founder of Fatah, Jibril Rajub, member of the Central Committee of the party and Osama Al Kuasmi, spokesman in the West Bank.

The motto of the celebrations was “Statehood and victory”, all Palestinian factions were invited and all sent a representative to the event. Nevertheless, it has to be mentioned that Hamas did put some obstacles, refusing the use of Al Katiba, the most representative Square of the city, citing “security reasons”. So, is this really a sign of the politicians’ will to actually get ahead with the reconciliation process, that has stalled so many times in the past? It seems so, after both sides experimented a significant surge of their popularity after the Egypt-brokered ceasefire with Israel (Hamas received all possible support from Fatah leaders) and the recognition of Palestine as an non-member observer state within the UN framework (supported, although mildly, by Hamas), and above all once both sides have realized Palestinians are both disillusioned with the current approach to peace and increasingly aware of the need for unity, renewed strength and a clear blueprint. They all know the thaw must be for real now. Palestinian unity has been achieved at the societal level, what about the political side? The key words authorities in charge of the process should bear in mind are solidarity and willingness.

Hamas’ PM Ismail Haniya issued an optimistic statement in which he stated that “this act establishes a scenario to end our internal schism (…), we hope to open the road towards reconciliation”. A video of Palestinian Authority  President Mahmoud Abbas on similar terms was played and hailed: “soon we will regain unity and an end to the occupation, raising the Palestinian flag over Al Aqsa and Jerusalem (…). We must all take this opportunity to join forces, hearts and determination to save our capital”. Talks between both sides are supposed to keep going on, but constant clashes and conflicting views on the negotiating process with Israel (Hamas has refused to recognise Israel’s right to exist or accept peace accords between the Fatah-dominated Palestinian Authority and Israel), recognition at the UN or the use of violence (Hamas has refused to renounce violence) arise from time to time, thus hindering the implementation of the reconciliation deal signed in Cairo in 2011. In particular, scheduled unified elections that couldn’t be held last year, principally because Hamas stopped the registration process in Gaza, may be a viable option soon, together with the mutual release of political prisoners. Indeed and according to Reuters, an Egyptian official said Cairo (even though Egypt is nowadays plunged into its own serious internal problems) planned to invite the two factions for talks within two weeks.

Palestinian reconciliation is clearly inevitable, and it is only a matter of time, even though there is still much to be done. First of all, unity calls for an actual reformation of the Palestine Liberation Organization, making it capable of embracing views from all Palestinian factions. Hamas should also review and clearly define its (somewhat inconsistent in the past) stance (maybe the election of a new leader is a positive first step?). All in all, they both have a whole year to advance in this winding vital path that will someday end in the creation/full recognition of a full-fledged Palestine so many people have been looking forward to and so many lives have been lost for.