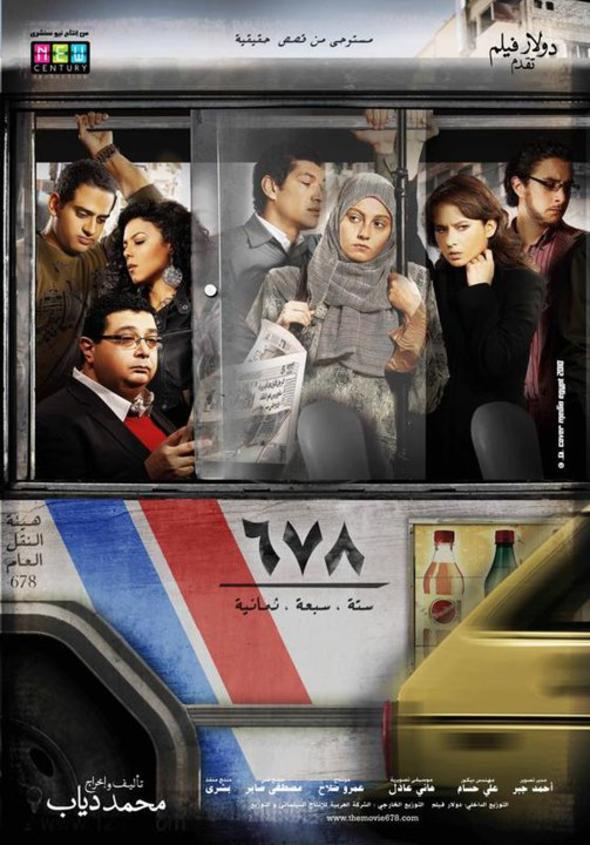 It’s no secret that life for women in Egypt is not always easy. Typically ignored by authorities and politicians – whichever their background – sexual harassment is beyond doubt one of the most serious problems the country faces nowadays. A problem whose roots are difficult to determine, but which has for years represented both a taboo and a gangrenous wound for Egyptian society.

Sexual harassment is an issue that many remarkable organizations such as Tahrir Bodyguard or Operation Anti-Sexual Harassment/Assault have been raising awareness about for years, but that has only been really discovered by the West after the 25 January Revolution. The film 678, released in 2010, also aims to show people around the world the gravity of this scourge.

Indeed, 678 tells the story of three very different women who find themselves united in their quest for equality against the thousands of daily cases of sexual harassment that take place in Egypt. Based on a (maybe too) true story, one of the heroins turns the country upside down when, weary of being groped every time she goes to work on Bus 678 (as she cannot afford taking a taxi), sticks a knife in the groin of her stalkers before fleeing into the crowds.

Her name is Fayza and she is a conservative mother of two, struggling to find real justice in her own narrow world. The film’s true central character, Fayza is a woman who tolerates daily doses of abuse from the men of Cairo; from the taxi rider poorly singing the Tamer Hosny lyrics “you ask about women/they are simply mad/they are all the same” to the groping she endures on the crowded bus of the film’s title, to the nightly sexual demands from her spouse.

Meanwhile, in a completely different part of Cairo, Seba, a wealthy jewelry designer, is gang-raped during celebrations of a victory by the Egyptian soccer team (in a sequence that foreshadows the real-life sexual assault of U.S. journalist Lara Logan). Instead of giving up and sweeping the event under the rug, she then decides to confront her fears and teach other women to defend themselves against these kind of situations.

The middle class is, for its part, represented by Nelly, an amateur monologist who has to suffer the condemnation from nearly the whole country and, worse still, her family and beloved fiance, when she decides to be the first Egyptian to initiate a sexual harassment lawsuit after having been attacked by a passing motorist.

At one point, the three women bump into each other and end up, while scheming to enact revenge upon Cairo’s men, engaging in a discussion showcasing a surprising clash of views on sexual harassment, markedly revealing the underlying class resentment that haunts every frame of the film.

For example Fayza, as the good Muslim she is supposed to be, still manages to justify harassment up to a certain extent when delivering a diatribe about women who wear provocative clothing and refuse to cover their heads. She nonetheless becomes an idol of women’s liberation, when thousands of women start to realize that only violence may change things.

The men in the film do play a noticeable, although vital, secondary role. Fayza’s husband represents Egyptian middlemen: Plunged into financial problems and sexually frustrated, he demonstrates at one point how anyone in that situation may find it completely normal to harass other women. After witnessing her wife’s attack, Seba’s husband lets sympathy aside and finds it difficult to hide his shame. Nelly’s fiance is, just like her family, supportive in the onset but ends up thrusting her into a dead-end.

The one man who takes the brave women’s side is the police officer investigating the stabbings. Essam, at first an apathetic detective, takes over the case and ultimately tracks the women down, but the unexpected birth of his first child causes a serious change in his attitude towards both the women and the case.

The film clearly depicts the fatal consequences of silence and of accepting denial as a solution, while revealing an intriguing dark side of Egypt that the world had at the time just barely seen. The director, Mohamed Diab, offers an acute insight into the psychological and social trauma that Egyptian women have suffered for generations and still have to endure every day. One can only hope that 678 is at the forefront of an era of social change in an Egypt clinging to an outdated definition of masculine dominance.

WE SAID THIS: Check out our recent post on 9 Depressing Things About Living in Cairo. Not surprisingly, sexual harassment made the list.