Last Sunday, Coca-Cola provoked outrage in America after airing a – God forbid – multi-cultural, interfaith, gay-friendly advertisement, during the Super Bowl, to the tune of “America the Beautiful.”

Commercial time during the Super Bowl is its own competition between mega-corporations, which compete to win the attention of over 110 million TV viewers.

So what was the problem, according to some ‘murricans on the Twittersphere?

THERE WERE BLACK PEOPLE! And Asians! And Mexicans! And Indians! People of color, oh no! There were Jews wearing kipas! And a Muslim woman wearing hijab? Why are there immigrants and terrorists on our television? 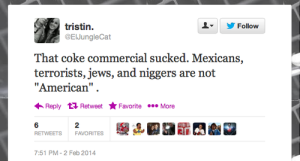 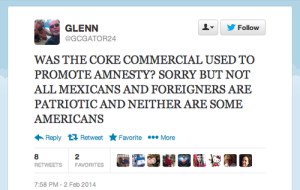 And “America the Beautiful” was sung in…*gasp*… multiple languages? 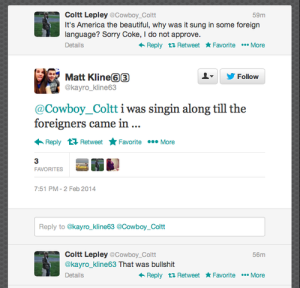 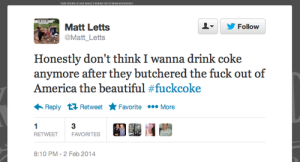 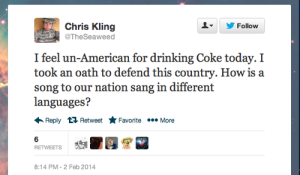 IS THAT THE LANGUAGE OF… THE TERRORISTS? 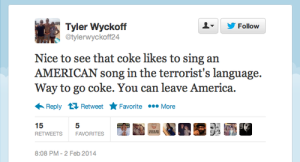 To top it off, there were gay people! AND they had an adopted kid. *Gasp*

But it wasn’t all bad – the Coca-Cola ad was a big win for LGBT groups in America. It was the first commercial featuring a gay couple to be aired in a Super Bowl ad, on all major networks and in front of such a large viewership. The two gay men featured in the commercial were shown happily rollerblading with their adopted girl.

Democratic political strategist David Plouffe was quick to make a tongue-in-cheek joke about the commercial via Twitter to the Republican National Convention (RNC), which is known for its anti-gay platform:

CEO and President of the Gay and Lesbian Alliance Against Defamation (GLAAD), Sarah Kate Ellis, applauded the commercial in a statement: “Including a gay family in this ad is not only a step forward for the advertising industry, but a reflection of the growing majority of Americans from all walks of life who proudly support their LGBT friends, family and neighbors as integral parts of ‘America the Beautiful’.”

WE SAID THIS: In case you missed it, check out “America’s First Openly Gay Imam“.