Bassem Youssef’s Status About His Late Father Broke Our Hearts

Yesterday, Egyptian comedian and political satirist Bassem Youssef posted about his father’s recent passing with a moving post about illness, mercy and loss. The post quickly vent viral, a testament to the impact his beautiful words made on so many people. 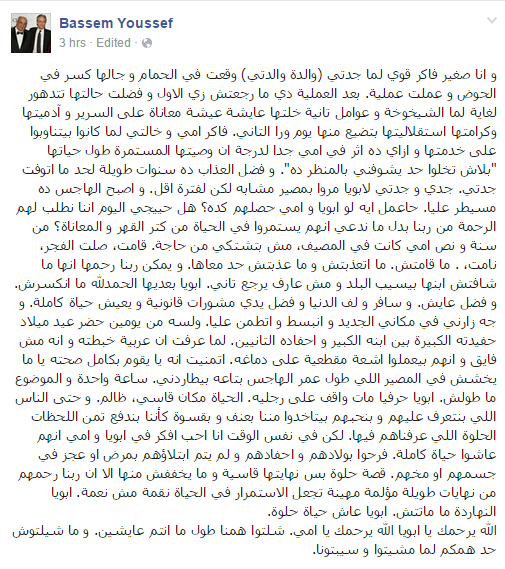 I remember when I was young, my grandmother (my mom’s mother) fell in the bathroom, broke her hip bone and underwent surgery. After the operation, she was never the same and she kept getting worse until aging and other factors left her leading a life in bed, losing her humanity, pride and independence with each passing day. I remember how my mom and aunt took shifts helping her, the effect it had on my mother, that her lifelong will was, “Never let anyone see me like this”.

The torture ended after many years when my grandmother passed away. My father’s parents suffered a similar fate, which did not last as long. Then I became obsessed – what would I do if this happened to my parents? Would I ever ask God for mercy on them instead of living because of all the oppression and suffering?

A year and a half ago, my mother was in a summer resort; she wasn’t complaining of anything, she woke up for her Fajr prayer. Slept. She never woke up. She didn’t suffer or cause anyone to suffer with her. Maybe God had mercy on her so that she didn’t have to see her son leave the country and not be able to return.

Later on, my dad did not break and kept on living. He traveled the world and kept on giving legal advice, living a complete life. And he came and visited me in my new place and he was happy and reassured. Just two days ago, he attended his eldest grandchild’s birthday amongst his eldest son and other grandchildren.

When I found out he was hit by a car, that he was not conscious and that they were doing a CT on his brain, I wished that he either woke up in full health or never suffer the same fate I have obsessed about my whole life. One hour later, it did not take long. My father literally passed away standing on his feet.

Life is a cruel place. Unjust. Even the people we meet and love are taken away from us violently and with cruelty as if we are paying the price of the good moments we shared. But at the same time, I would like to think that my mother and father had a complete life. They enjoyed their children and grandchildren, did not get sick, nor had a disability in their bodies or brains. A nice story, but with a cruel ending, and the only thing that makes it better is that God showed them mercy from long, painful, insulting endings that make survival an indignation rather than a blessing.

WE SAID THIS: May they rest in peace.