The Tables Have Turned! Again… 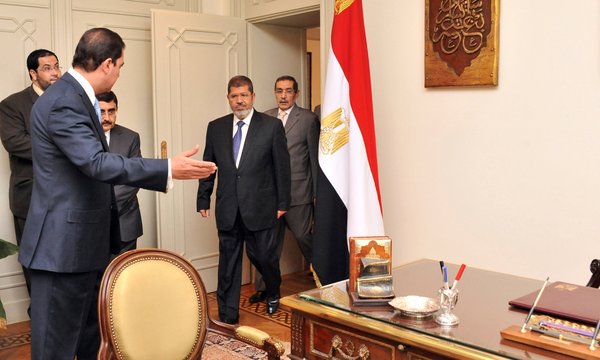 A lot went down in Egypt today. As of 8 PM this is my summary:

. Morsy “fired” Tantawi and Anan by making them his advisors (they join the rest of the ex-Mubarak era officials who are in that group)

. Morsy promoted the very people Tantawi would have needed to conduct a coup d’etat against him, thus, creating ties of allegiance between the military and himself/the MB (note that this does not necessarily strengthen the office of the presidency but the influence of the MB)

. Morsy cancelled SCAF’s constitutional appendix of last June and has given himself legislative authority

. Morsy can dissolve the constitutional committee and create a new one if, for any reason, the current committee fails to reach an agreement, thus giving Islamists in the committee, who make up 50% of the committee, no reason to compromise and ensuring its failure and MB domination of the constitution writing process (disclaimer: I am not a legal expert so I may be wrong in this point)

. Morsy has announced Mahmoud Mekky (who is neither Female nor Coptic) as his Vice President. This, along with his appointment of Ahmed Mekky, the new minister of Justice, which may bring the “reformist” branch of the judiciary under the Executive’s wing, potentially setting the stage for a future confrontation with the Constitutional Committee and, given Egypt’s laws governing the relationship between the Executive and Judiciary, may bring the entire judiciary arm of government under his control in the not too distant future.

For those who are keeping track this (along with Mowafi’s dismissal, the new Shura press appointments and the attacks on freedom of speech and free assembly earlier this week) effectively brings the following areas of government and society under the control of the Muslim Brotherhood: Executive branch, Military, Intelligence, Interior Ministry, Legislative authority, the Constitution writing process, the Press and, potentially soon, the Judiciary…

There are two ways this could be interpreted, the first is cause for panic, the second for action:

“The negative way:” The unchecked force of the Executive branch of power will destroy our nascent democracy and snuff out any “liberalism” that may have emerged over the past few years.

“The positive way:” Liberals and liberal leaning members of society will now no longer have to support undemocratic institutions and candidates to help them achieve their goals for a Democratic Egypt. Affording them the ability to remain true to their principles and perhaps transform principles into power via the ballot box. Also, Morsy/MB have now assumed the full responsibility of governance and will bear full responsibility for any and all failures during their time in office and hopefully, will be punished in the next electoral cycle (if we can guarantee fair elections to occur).

Which way things will play out remains to be seen. The only thing certain is that those who were hoping for some peace and quiet from this revolution will be disappointed…

General disclaimer: I have tried to make use of the media reports from Ahram Online, Egypt Independent and Shorouk News, insofar as they are accurate, to attempt to paint a picture of what is going on today. Any discussions of future events that may or may not happen are merely speculative and I relied on my ability (or lack thereof) to interpret today’s events in light of the bigger picture. Readers should not take any speculation on the future as a result of access to privileged information, for I have none, I am merely “bafty” as all good Egyptians do.