DJ Moneim Hafez has been spinning the soundtrack to Cairo’s party circuit more and more as of late, with regular appearances at Cairo Jazz Club and coming off a hit set at Electrum’s Xmas soiree. Get to know the up and coming mix master – who specializes in deep, tech and vocal house – in this Q&A about his background, his New Year’s resolution and his obsession with Kylie Minogue.

How did you get started DJing?

I started at a young age. I was drawn to mixing by my sheer love of music. At the age of 15 , I used to have small gatherings with friends. As the small gatherings rapidly developed into parties, there developed a necessity for music to be mixed live. That’s where I began learning to mix music. As time passed, I started recording sets to listen to while driving rather than having to keep selecting songs.

Tell us the story of your first gig.

Honestly, I can’t really remember my first gig, but by far the most memorable was the first time I played in Jazz. It is honestly my favorite place to play.

Who are your musical influences?

Well, I have a lot of musical influences but I don’t really have some specific DJ or producer who really spoke to me, but rather my friends – the ones who collectively taught me how to mix music and even produce: Moody, Hafez, Misty and Zaki. 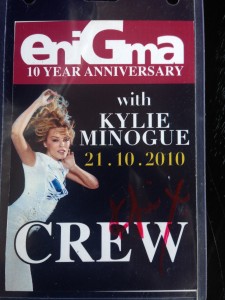 Name an artist people would be surprised you listen to.

Kylie Minogue, I love her. When she came to Egypt, I stalked her outside her hotel after the concert to get her autograph. I even stole a crew pass in order to be let in.

For you, what’s the number one rule of DJing?

As cliche as it sounds, fuck everything else and really just have fun.

You’re doing a gig with a live band in Gouna on the 29th and we’re sure you’ve got some tricks up your sleeve – or, in this case, in your pumped up kicks. Give us a teaser of what we can expect.

Well actually, I don’t wanna give anything away, but let’s just say that you might find us working together again in the future.

What’s something you did this year that you’re proud of accomplishing and one thing you want to accomplish in 2014?

Well, I’m always glad the world hasn’t ended, but mostly I’ve been working on a few productions that should be making an appearance very soon. I’ve never given myself a New Year’s Resolution, but hey, if I’d have to make one it would be GRADUATE!

WE SAID THIS: Don’t miss DJ Moneim at Moods in El Gouna on Dec. 29, where he’ll be playing a set with indie up and comers Grey Grass.