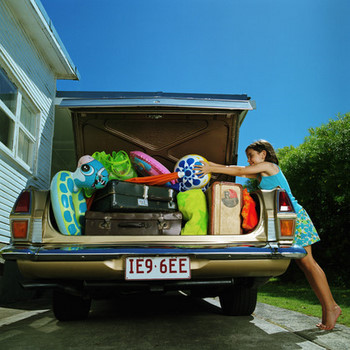 They are never a fun reality. Ever.

L Boogie and motion sickness, Z Money and the constant need to move around, the heat… oh the unbearable heat. Superdad’s love of all things Om Kalthoom… did I mention the heat?
And yet… we still decide to drive to the beach. All. The. Way. To. The. Red. Sea.

The ride there is almost always the least of my worries. It’s always the ride back that worries me. Once it settles in that the vacation is over, sunburns are in full effect, L’s covered in mosquito bites, Z’s knees are skinned, and you hate everyone. Well at least I do. You say goodbye to room service, housekeeping, the sun, the sand, the endless blue water… obviously you hate everyone and everything. Right?

Well, this trip was especially memorable. Superdad and I decided to party the night away. Well, in all honesty, we decided to go out for dinner and that somehow turned into a party. We got home at the break of dawn, so obviously our drive back home would be torture.

A few hundred kilometers down the highway we hit a bump. A bump so horribly vicious it ruined the bottom of the car. And the car began to leak oil. We somehow managed to get to a nearby rest stop while Superdad drives the car to a nearby garage. A few pizzas and diaper changes later, Superdad calls me with the horrible news that there’s no way we’re driving home and that we’d have to wait for a tow truck. Gasp.
This was L’s cue to break down into a record-breaking tantrum.

And if only my tired ears could shut down… What Spongebob? We don’t even own a Spongebob anything?

A few suitcase shuffles and moving around, we managed to all fit into a cool single friend’s car. Superdad rode with the tow truck. And a few hours later we were home. Well, the girls and I were home, Superdad arrived about 5 hours later. I wanted to kiss my front door.