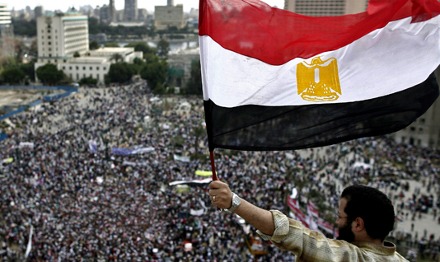 It’s been less than a month since the interim government of Egypt, perfectly fused with the military, decided to raze the protest camps in Rabaa Al-Adawiya Square and Nahda Square.

The extreme violence that took place during this incident (at least 380 people died in Rabaa alone that day, according to Human Rights Watch) led to international condemnation. However, since then, support for the military-backed government, and especially for General El-Sisi, has grown by leaps and bounds among Egyptian citizens.

Atypically, after almost three years of clashes and uprisings, a relatively comfortable calm has taken over the country despite the state of emergency curfew imposed on Aug. 14, allowing Egyptians to return to their routines of work, school, family, friends, outings and, of course, the city’s notorious traffic.

Today, challenging the current status quo does not seem like an option for a large part of the population. But why this unconditional support for those who one day proved not to be on the side of the revolution?

The Muslim Brotherhood, which could have taken advantage of their election victory, did nothing but play a double game, aiming instead at the monopoly of power, disappointing those who took a chance in voting for Morsi and those who did not.

Morsi and his government took over the religious discourse, manipulating Islam for political purposes. They imposed a constitution that did not represent the wide swathe of community groups in Egyptian society and gave the armed forces near-unlimited privileges (yes, both sides were allies until very recently). And they passed a decree that gave Morsi the power to govern without the supervision of the judiciary.

Meanwhile, the economy was left to freefall, with the public debt skyrocketing, unemployment plummeting and regular water, electricity and petrol shortages.

It was only when the Muslim Brotherhood could no longer contain the discontent of the masses that the military abandoned their role of allies and viewers from the sidelines and took action. As in 2011, the armed forces very astutely positioned themselves as “saviors” of a people plagued by economic and social injustices.

On July 26, General El- Sisi urged Egyptians to take to the streets to “validate their will and give the army and police a mandate to deal with possible violence and terrorism.” And so it happened. Led by the movement “Tamarrod” (Rebel), over 17 million people took to the streets of Egypt on June 30, making clear the total rejection of the Muslim Brotherhood government, which in a year had brought the country almost to limit of its strength.

What happened was not a “coup” in the traditional meaning. The people were undoubtedly the driving force behind the protests and Morsi probably saw that day approaching. However, the army’s reaction was not spontaneous either, but calculated and deliberate.

Backed by the head of Al Azhar, the Coptic pope and different opposition groups, El-Sisi advanced a road plan that, in that moment, seemed inclusive and similar to the one put forward by the movement “Tamarod”.

There is no doubt that the army wants to stop economic and sociopolitical chaos reigning in Egypt, but to talk about democracy and consensual dialogue is a different issue. Since July 3, over a thousand members of the Muslim Brotherhood have already been arrested, including most of the leaders of the group. This has led to the anger of the Brotherhood, and consequently to an increase in Islamist signature attacks. It was not hard to predict.

Today in Egypt, there are many driving forces, some of them extremely opposed: A feeble interim government, a weakened Brotherhood, and the state security forces, supported by the United States and Gulf countries, which are re-engaging their dreaded machinery even stronger.

Also, the region is experiencing a convoluted situation. Saudi Arabia, the UAE and Kuwait, which had disagreements with the Muslim Brotherhood, now give political backing to the Armed Forces. At the same time, Turkey and Qatar denounce the “coup”.

But how long will the support for the military will last? Will secularists and other opposition groups continue to support the government’s strict measures? What if the authoritarian operation against the Brotherhood grows into a broader campaign to suppress all forms political opposition?

Even what citizens prefer seems to be changing rapidly. Many Egyptians who a year ago were in the streets calling for the end of the military rule now seem to unconditionally support the military-backed government, seeing the new rule as more desirable to the Muslim Brotherhood’s government.

In the midst of this sociopolitical tsunami, Egypt faces the third constitutional process in two years. It’s impossible to foresee what the future will bring. Everything changes at the speed of light yet it somehow remains the same.