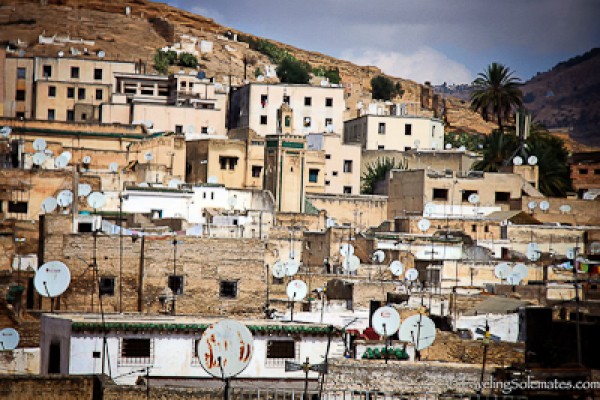 The Prophet Mohamed (PBUH) was known for spreading love and peace even amongst enemies. No matter how people tried to harm him, he always embarrassed them with how kind and polite he was, making them regret ever being cruel to him.

Prophet Mohamed (PBUH) earned people’s respect because of how polite and decent he was. And that is how Islam and Muslims should be. In our religion, neighbours are said to be more important than your actual home and you should always take care of them and look out for them.

Below is a story about the Prophet (PBUH) and his neighbour:

She thought until midnight and finally decided how to take revenge from him. And she could not sleep all night because she was too eager to take revenge for the idols she worshiped. Even before the first ray of sunlight had entered her window, she was busy sweeping her house.

She saved all the garbage in a basket, placed it on the roof of her house and proudly looked at it for a while, then with an impatient look on her face, she looked at the street that she lived on and thought, “No one has ever seen him angry. Everybody will praise me when they will see him shouting at me and getting mad. They will laugh at him and make fun of him.” She looked at the basket again and grinned.

Meanwhile, she heard footsteps announcing the approach of the end of her waiting. “Finally my prey has arrived,” she thought, as she saw a man dressed in clean, white clothes coming her way. She picked up the basket in her hands and threw all the garbage on him when he passed by. Much to the woman’s disappointment, he did not say anything and continued on his way.

She did the same the following day thinking, “Maybe this time I will be able to annoy him.” But he was too gentle to shout at a woman. She misinterpreted his attitude as fear and decided to repeat the same mischief every day in order to keep him frightened so that he might stop preaching the oneness of God.

This gentleman whom the woman hated so much was Muhammad (PBUH), the last prophet of Allah Almighty. He did not want to disappoint the woman and so continued to walk down the street every day instead of picking an alternate route, and prayed for the woman to recognise the truth.

One day, the Holy Prophet Muhammad (PBUH) did not find the woman to be on the roof of her house with the basket. This worried him, because he thought something must have happened to her for not being over there. So he knocked at the door.

“Who is it?” asked a feeble voice. “Muhammad bin Abdullah,” was the reply/ “Can I come in?” The woman feared, “I am sick, and too weak to fight or talk back, therefore Muhammad has come to take revenge for what I have been doing to him.” But the permission to enter her house was asked for in such a gentle voice that she allowed him in.

Muhammad (PBUH) entered the house and told the woman that not finding her on the roof had worried him and he thus wanted to inquire about her health. On finding out how ill she was, he gently asked if she needed any help. Hypnotised by the affectionate tone in the Holy Prophet’s (PBUH) blessed voice, she forgot all fear and asked for some water. He kindly gave her some in a utensil and prayed for her health, while she quenched her thirst.

This made her feel very guilty for being so cruel to him in the past and she apologised for her mean behaviour. He forgave her and came to her house every day to clean it, to feed her and to pray for her un til she was on her feet again. The kind attitude of the Holy Prophet (PBUH) inspired her into the recognition of the truth, and his prayers were answered in the form of yet another addition into the growing number of Muslims.

Nowadays, if a neighbour so much as parks in our spot, we go insane and start thinking of how to annoy them back. We treat them like strangers or sometimes even enemies, when the Prophet (PBUH) taught us to forgive and solve things with kindness and decency.

The next time your neighbour does something annoying, remember this story and let kindness and politeness resolve your issues instead of threats and violence. Let us remember and show how peaceful Islam really is.

WE SAID THIS: Don’t miss all the lessons from Prophet Mohamed (PBUH) here.