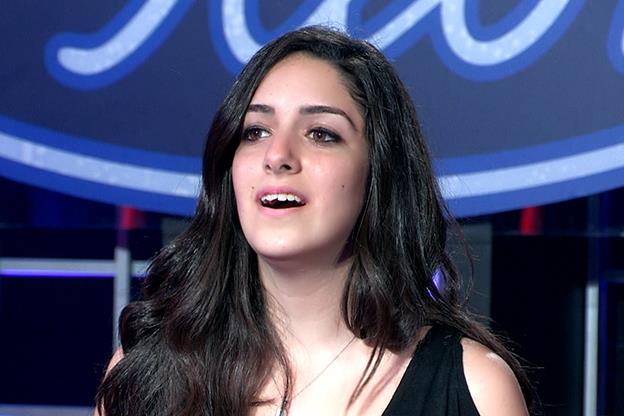 She is only a teenager, but her ambition and talent is mind blowing. With her amazing voice, she won 4 great judges’ YES on Arab Idol season 2.

Better watch out people this girl is on fire and promises to be a great singer someday. Check out what Farida Nasser had to say about her journey as a rising star and her adventure at Arab Idol.

1. Let’s start with the usual, tell us more about yourself.

I am half Egyptian half Palestinian. I lived all my life in Egypt, still didn’t get the chance to visit Palestine, but i’m willing to go someday, for sure. As all of you already know my hobby is singing. I study Business at The German University of Cairo (GUC). I started singing when i was 9 years old and never stopped since then. I always used to get scared of taking big steps especially when it comes to media, and thats the reason I applied to Arab Idol. I knew it was going to be a good opportunity for me. My other 2 hobbies are travelling and shopping.

2. How did you know that Music is your thing?

When i was in elementary school, i was a very shy girl, all i would do was sing with the school’s choral, But one day i came up to my music teacher and told her that i would love to join the solo crew and that i won’t be shy anymore (because at that time the solo crew had horrible voices :D) So, i had to encourage myself and go for it. After she heard me sing, she gave me the opportunity to sing on every occasion, Christmas, New Year’s Eve, and every party in school.

3. Did you ever have a vocal lesson, or let’s say you are self-taught?

I have never had a vocal lessons in my life not till this day, but hopefully after i finish university i will. I taught myself everything, everyday i work on my singing by listening to old singers from programs like Arab Idol and The Voice. I always take what that judges say into consideration, and thats how i become better day by day.

4. Would you call singing a hobby or something that you would do for a living?

No, I would call it a hobby because I am already in the business faculty, I haven’t really decided yet, but if i ever get a job i think it will have something to do with my major.

I used to write songs when I started singing at the beginning and compose them, I still can actually, but when I have to, or in my free time but not always.

From Narcissism to Domestic Violence, Salon Zahra Touches on…

6. Who are you musical influences?

I’m not exactly sure if you mean who encouraged me to sing, or who my role models are? But i’ll answer both just in case. My mom has always encouraged me when it comes to singing, but she always tells me that studying is more important and that sining should come second in my life. As for the other question, Warda, Om Kalthum, Naggat, and Sherine.

7. Before Arab Idol, Have you ever performed in front of such a huge audience?

I’ve mentioned before that i used to sing all my school events. When i got older I started to preform at different talent shows like. Nermine Ismail American school used to organize huge concerts at Cairo Stadium, many famous singers used to attend to watch us preform. I also made 2 promos on Nogoum Fm one in 2011 and the other in 2012. It was a recording so not so many people actually knew it was me. Like i said before I was always scared of taking big steps into the media so i always used to make small ones, but for me they are were a huge deal.

8. Tell us about your experience in Arab Idol.

It was the best thing that ever happened to me, too bad it didn’t last. I believe in myself and in my talent, in Arab Idol they made us trust ourselves more and know that we are worthy. I made new friends from all over the Arab countries. I’m glad that my friends reached the finals. I passed two stages in Arab Idol and i know i could’ve gone a long way. In the day of my shooting i had family issues and caught the flu that morning because of the bad weather (we were shooting in December 2012) as soon as i got on stage i lost my temper because i had a very bad cold and forgot the part i was supposed to sing. This made me unqualified for the next stage, although if it wasn’t for my circumstances at the time i knew i would i have made it through. I only stayed there for 10 days, i don’t regret anything that happened at the time as those were the best days of my life. We were treated like celebrities in Lebanon, i miss that the most :).

9. Who is your favourite contestant now in Arab Idol?

Mohamed Assaf and Ahmed Gamal although Yousra Saouf is out but i love her too.

10. We know that you are so good in singing in Arabic, but have you ever thought about singing in other languages?

I sang before in English, two times in graduation ceremonies and people loved it actually, but I believe in singing Arabic more as i don’t listen to English songs that much.

11. Now that you have a huge fan base, what are your upcoming plans?

Till now i’m just focusing on studying and passing because thats what my parents are asking for. After that i don’t know what life has planned out for me, I might be on Arab Idol again, who knows :). I never lose hope, i’m always full of ambition, so i’ll keep going and just hope that no one forgets who i am.